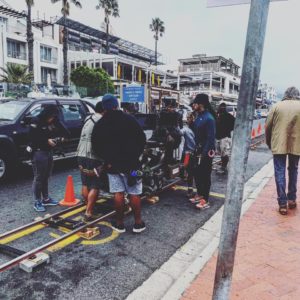 I walk in Camps Bay every day, not always knowing what I will see or experience. Yesterday the beachfront was a hive of activity, with a film shoot for what I learnt was for sequels 2 and 3 of a 2018 movie ‘The Kissing Booth’, aired on Netflix.

From little bits and pieces of what I picked up on the street yesterday, from watching the teenage 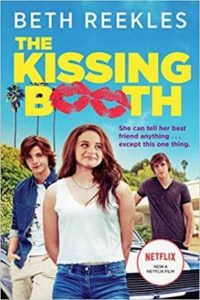 romantic comedy on Netflix, and from Google, I learnt that ‘The Kissing Booth’ was shot largely in Cape Town in 2017/and released on Netflix last year. Shoot locations then were UCT, given that a large part of the storyline was based on the high school life of Elle, her best buddy and ‘twin’ by birthdate Lee, and his brother Flynn. Other Cape Town scenes were the Camps Bay beach, as well as the coastal road beyond Bakoven out towards Llandudno, a beach restaurant in Hout Bay (possibly Dunes), and a city centre scene. Of course the viewer who does not 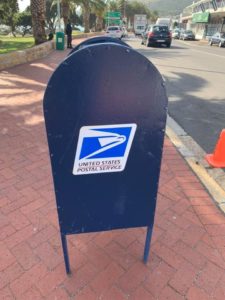 know Camps Bay and Cape Town would not have suspected the location, the storyline being based in Los Angeles.

On my walk yesterday I walked past a blue United States Postal Servuces postbox on my way to the beachfront. I noticed a number of young teenagers skateboarding in the now defunct swimming pool on the Camps Bay Beach, warming up for the shoot. 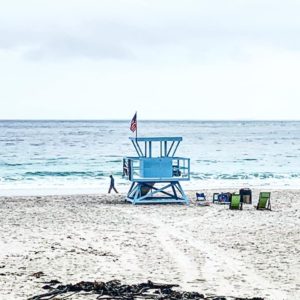 Movie 1 also had a brief skateboarding scene. I then noticed a beautiful baby blue lifeguard high seat on the beach, waving the American flag. Behind the former pool area numerous movie production tarpaulins 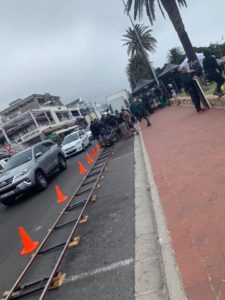 had been set up, looking like a proper movie set, added to which was a camera track running alongside the pavement opposite the Bay Hotel. 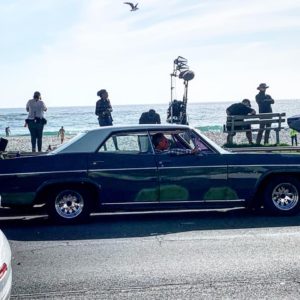 On my afternoon walk noticed a number of American style cars on both sides of the road, including a vintage Chrysler, a Mini Cabriolet, and a massive blue truck. I chatted to the supplier of some of these vehicles, and he showed me the 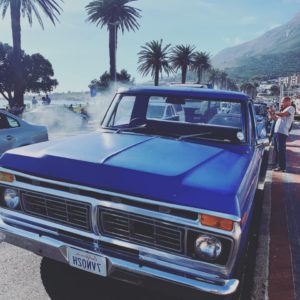 reversed Los Angeles number plates on the vehicles, a post-production technique ‘reversing’ this to legible signs when they have to swop the vehicle steering to left hand drive. Near to where his truck was parked, a large Santa Monica sign had been erected, also in the mirror image type.

On seventeen.com I read that the sequel will feature Dance Dance Revolution scenes between the two co-stars, spending a lot of time rehearsing the choreography, as per actress Joey King’s Instagram – she has 9,5 million followers! The movie sequel ‘The Kissing Booth: Going the Distance’ will be released in January 2020. ‘The Kissing Booth’ was the ‘most rewatched movie of 2018’ on Netflix.  It was also described as ‘one of the most watched movies in the world right now’ by a Netflix executive!

Production trucks took up a lot of the space on Victoria Road in Camps Bay, but I am sure the locals did not mind too much, not currently being big shoppers in the suburb. 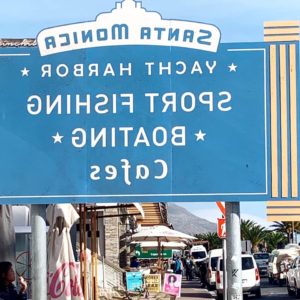 I do not know how long the film shoot will be taking place in Camps Bay, but I will add more details and photographs as the shoot progresses.

But what is certain is what a fantastic economic investment the making of the sequels of this Netflix movie means for Cape Town and our country! And it confirms clearly that LA is our twin city! Thank you to the Netflix producers for choosing Camps Bay as the main location for the shoot!