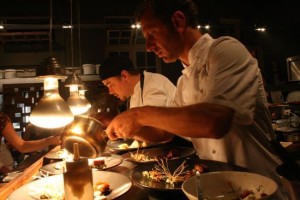 I am loath to write about any survey or compilation by TripAdvisor, but the pride of seeing Cape Town Restaurant The Test Kitchen in its list of 25 Best Fine Dining Restaurants in the World makes it worth acknowledging.

The Test Kitchen made number 28 on the World’s 50 Best Restaurants earlier this year, but is ranked 22nd on the TripAdvisor list. No motivation for the ranking is provided, with only one customer review quote : ‘Booked six months in advance. It was worth the wait. The menu was incredibly inventive and well-prepared (sic). The different tastes and flavours were incredible’. It is a pity that The Test Kitchen is listed as being in Woodstock in South Africa, our city name not being mentioned!

Western Cape Minister of Economic Opportunities Alan Winde congratulated the restaurant: ‘The Test Kitchen continues to garner international recognition for the excellent offering they deliver. Earlier this year, the eatery featured on the  World’s 50 Best Restaurants for 2015, which was compiled by British trade publication, Restaurant. Through Project Khulisa, we are positioning the Western Cape as a leading food and wine destination. Establishments such as the Test Kitchen will be a key part of that strategy’.

The TripAdvisor ranking of Top 25 restaurants in the world is the following, with The World’s 50 Best Restaurants 2015 ranking in brackets, where applicable:

We salute Chefs Luke Dale-Roberts and Ivor Jones and their team at The Test Kitchen for holding the international restaurant flag up high for Cape Town.

POSTSCRIPT 15/10: My skepticism about TripAdvisor lists skyrocketed when I saw their Top 10 Best Restaurants in Africa listing, The Restaurant at Clos Malverne coming in at 5th Best in Africa! How  sad for the restaurant that Eat Out has overlooked their ‘sterling’ performance in awarding themselves so many 5/5 ratings to achieve this performance, blatantly visible on their TripAdvisor page! Their Communications Manager Erich Zeelie is zealous on their TripAdvisor page, and takes to blocking food writers from their Twitter account and Facebook page without rhyme or reason! The same skepticism can be expressed for Terra Mare in Paarl!

The TripAdvisor Best Fine Dining Restaurants in Africa list is as follows: