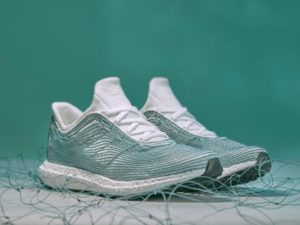 Few of my Blog readers will know that I have taken the stream near the Camps Bay Tidal Pool under my wing, cleaning it twice a day. One piece of paper or plastic litter in a stream has made me see it all over Camps Bay, when I walk the Promenade twice a day, and sadly everywhere I go in Cape Town. I was delighted that Adidas and Parley have joined forces, to turn ocean plastic into shoes.

It was on 2 January of this year when my interest in and concern for the ocean commenced, 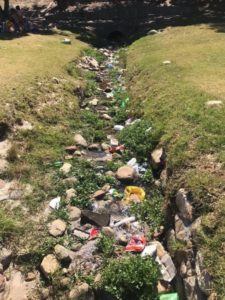 shocked at the state of the Camps Bay stream, which flows directly into the Atlantic ocean. The first day of January is a notorious day in Camps Bay, the beach overrun with beach goers and picnickers, and I could not believe how much litter was in the stream itself when I walked past it the following day. What started as a photograph and an angry comment on Facebook about the state of the stream, led me to realise that being angry was not going to get the stream clean, so I grabbed a garbage bag from home, and went back to the stream, filling the bag with all the litter that was in the stream. From that day onwards I started walking twice a day, checking up on the stream, and wearing gloves now, to clean not only the stream, but both sides of Victoria Road on the promenade in Camps Bay.

Sadly, I was like other beach goers, walking over or around litter, thinking that someone else would clean it up and throw it away in one of the many bins in Camps Bay. But the Cape Town Council is understaffed, and at best their staff empty the contents of the green bins into blue bags, and once in a while I see staff with brooms sweeping gutters and pavement too. But the litter is all over, on the lawns and the beach too. I have requested my fellow Camps Bay residents to assist me in this task, but like most of the restaurants in Camps Bay, they wait for the Council cleaners to clean up the litter outside the businesses, not getting involved. I have received the odd compliment and thank you from locals and German Tourists, but I have yet to see any Camps Bay local or tourist pick up any litter. 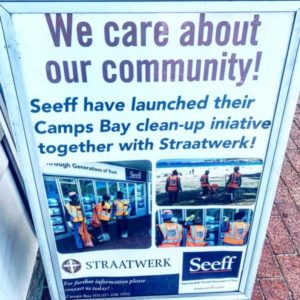 I am delighted that Seeff Atlantic Seaboard and City Bowl sponsors weekend cleanups on the beach in Camps Bay, and elsewhere. Having seen a board outside the estate agency offices in Camps Bay, I was referred to Rowena Childes of Seeff, and was offered the use of Straatwerk cleaners on a monthly basis, to help me clean up the stream, and to remove weeds and a fast-growing water plant from it. We have done what they call ‘deep cleans’ too, picking up the smaller items on the lawn surrounding the stream, littered with 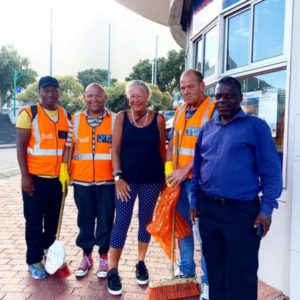 cigarette butts, bottle tops, bag closures, sweet papers, ear buds, and more. Shocking to see is the predominance of KFC, with paper boxes, chicken bones, and condiment packets, all brought to Camps Bay from elsewhere, but not removed when leaving the picnic area. I have requested children playing at the stream to help me in taking paper and plastic out of the stream, to teach them about care for the environment and the ocean, and it is a joy to see them playing in the now 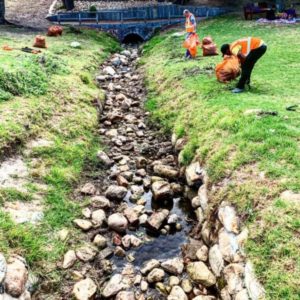 clean stream, looking for tadpoles and little fish, and to see the birds drinking from it and having their beauty baths.

I would love Pick n Pay to get involved in beach clean ups, the bulk of the litter in Camps Bay coming from its Camps Bay store, ncluding the shopping bags.

Just a few days ago the music duo Goldfish assisted in promoting a Miami Beach clean up, and I have asked them on Instagram if we could do something similar when they are next back in Camps Town.

A new trend is tagging one’s posts with #TrashTag, a new viral challenge for ‘bored teens’ to inspire others to clean up trash in parks and beaches. Before and after pics are posted of the cleanups. The challenge to the teenagers is to post pics of littered areas, to clean them up, and then to post the pics of the cleaned up areas. The initial Facebook post with this #TrashTag challenge was shared more than 300000 times.

Plogging is another new trend, combining jogging with picking up litter along the way, a trend which started in Sweden. Plogging groups have been created in France and Thailand. Plalking is my created word for what I do, walking and picking up litter!

Parley for the Oceans was created to encourage people to pick up trash in the ocean, and to use the deadly waste in a positive way by creating something useful out of it. Parley encouraged the manufacture of yoga outfits, and a Stella McCartney trainer. Its biggest collaboration has been with Adidas, which made 1 million Parley shoes in 2017, the running shoe manufacturer planning to up this to 11 million pairs of shoes made from recycled ocean plastic waste.

It all starts with us individually, in picking up every bit of litter on one’s daily path, to prevent it from entering the ocean in the first instance. Commendable are the trends of plogging and #TrashTag, and the environmental blessing of Parley and Adidas creating an environmentally friendly trainer.