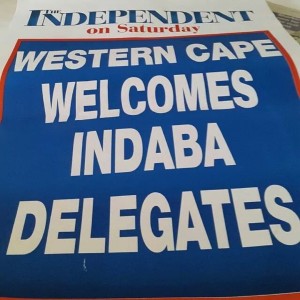 Durban and Cape Town have had a gentle rivalry when it comes to attracting tourists, which has never been overtly competitive and has been largely collegial, with a joint campaign on National Geographic to market the two cities, to save marketing monies. Now the relationship appears to have reached rock-bottom, with an angry Durban Tourism attack on Cape Town for its alleged ‘ambush marketing‘ of Indaba 2014, the tourism expo held in Durban, which drew to a close on Monday.

In the past other South African cities, but Durban in particular, have been annoyed that Cape Town attracts the bulk of international tourists, and that this is reflected by SA Tourism, in that it proudly features Table Mountain in much of its tourism communication, being a national icon for our country.  SA Tourism and Durban were irked that World Travel Market Africa was held in Cape Town a mere week before the start of Indaba, funded in part by the City of Cape Town, and attracting a fair number of exhibitors and visitors, and receiving praise for the event.  SA Tourism made a point of confirming that it would only support Indaba, there not being enough capacity for two tourism trade shows in our country, in its opinion.

Philip Sithole, head of Durban Tourism, appears to be paranoid about Cape Town, complaining to Southern African Tourism Update about how Cape Town ‘sabotaged’ Durban’s presence at World Travel Market Africa in Cape Town, in that ‘…Reed Exhibitions failed to deliver the ordered furniture to the Durban Tourism stand, leaving the stand bare and looking unprofessional. The show’s visitor guide also featured incorrect contact details for Durban Tourism. “We are disappointed that our image as an organisation and the destination was severely compromised, due to the poor displays at the stand caused by non-delivery of some furniture items. I am of the view that we were sabotaged’.  The Durban stand was the joke of a group of Cape Town tourism colleagues on Facebook, a photograph of the unmanned Durban stand on the Saturday morning of World Travel Market Africa being shared with amusement!

During Indaba Wesgro, the Western Cape destination marketing, investment and trade promotion agency, had 500 newspaper headline street posters erected outside the International Convention Centre (ICC) in Durban, and had 4000 newspapers with a Western Cape wrap- 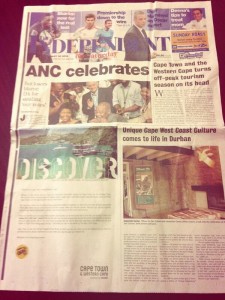 around delivered to the hotels close to the ICC, the content being Western Cape tourism focused. Judy Lain, Chief Marketing Officer of Wesgro, emphasised that the City of Cape Town, Cape Town Tourism, and SA Tourism did not contribute to the funding nor organisation of its campaign.

Sithole, who previously was a close collaborator with Cape Town Tourism in the joint marketing of the two cities, reacted with anger at the Wesgro campaign, saying that SA Tourism had allowed the City of Cape Town and the Western Cape to ‘hijack’ Indaba, a terrain that Durban believes belongs to its city, ‘hosted and sponsored by Durban‘!  He complained about Wesgro being allowed ‘to rule the roost at the indaba‘, saying ‘We are very unhappy about this because the event, which is sponsored and hosted by Durban, was used to market the rival Cape Town and Western Cape.   Firstly, South African Tourism allowed this agency to use advert clips for free to promote the Table Mountain. They also allowed Wesgro to distribute brochures and newspapers for free‘.  Sithole was particulary peeved by the cheeky newspaper posters which welcomed the Indaba delegates, even though Wesgro had not paid to organise Indaba, he complained.  ‘This was done at the expense of Durban, which should be getting all the promotion’, he added.

eTN Global News described Durban Tourism’s outburst as ‘behaving like a jealous competitor in accusing the City on the Cape of Africa (sic) to take over their international travel and tourism trade event‘.

‘It was not all rosy for the City of Durban at this years 26th travel and trade show, Tourism Indaba held at Durban ICC during the 10 – 12 May 2014. The host city has been left out on a (sic) key marketing campaigns by South African Tourism (SAT) that seek to promote South Africa Globally (sic). The City of Durban, through Durban Tourism last year launched its marketing strategy aimed at bringing (sic) additional 1,8 million visitors with a view to increase revenue from R5,7 billion to R10 billion by 2020, however it appears that, (sic) the city will have to do this all by itself as its partner (i.e. Cape Town!) seems to be on a different path to Durban.

First and foremost, during the launch of the largest tourism marketing events on the African calendar and one of the top three ‘must visit’ events of its kind on the global calendar hosted in Durban, the city has been snubbed and received just a handful of mentions in the major presentations and marketing collateral that marketed Indaba. Durban’s imagery and branding has not been included in promoting Tourism Indaba and has been left out and the city’s involvement has not been mentioned in the publication – Indaba Daily News which is published daily during the trade show. Durban has also been left out in the planning and hosting of trade buyers on Pre and Post Indaba Trade show (sic)’

During Tourism Indaba opening launch, it became evident that Cape Town plays a major role in position (sic) and marketing South Africa and Indaba as it featured prominently on the global marketing campaign. Durban, a major partner to hosting of Indaba has not been featured in the global campaign that seek (sic) to attract visitors to the country.

The city of Cape Town, which competes directly with Durban and has hosted a rival trade show – WTM Africa, has been prominently on (sic) the South African Tourism global campaigns and has received a prominent spot to ambush Durban – KZN in a platform that has been paid for by the city and the Province of KZN and this being the event of SAT, they are responsible to authorise and vet marketing materials that make their way to Indaba so that they do not become a prominent feature over the partners who have paid for the hosting of Indaba, which is the province and the City.  Importantly, South African Tourism as the host of Tourism Indaba, did not have a stand at Indaba, which means, South Africa as a country did not have a representative in a global trade and travel show.

Despite all of the above, the city of Durban has pulled out all the stops, lived up to its reputation as the entertainment and events capital of Africa as it hosted successfully (sic) Indaba Beach party themed – “Ekasi Shisanyama” which was attended by 3400 delegates and dignitaries from all over the world. Durban Tourism team worked tirelessly in ensuring that all our visitors to the city get (sic) to experience authentic lifestyle.

Durban Tourism held successful trade meetings with international buyers and showcased the city and experiences to the international delegates and media. Most of the hosted buyers come (sic) from major source markets namely, India, Australia, Botswana, Nigeria, Zambia and Germany, which are essential to the city’s tourism strategy. The team has ensured that visitors experience the unique Durban Township Lifestyle and experienced the rich culture and heritage of Woza eNanda Heritage Route.

The city of Durban, (sic) engaged its key stakeholders with its leadership during the live panel broadcast of CNBC – Africa hosted at one of (sic) Durban’s iconic Moses Mabhida Stadium encompassing the theme “Unlocking Durban’s Potential into Africa” with emphasis on investments, events and tourism destination into Africa, developments in Dube Trade Port and expansion of Durban’s hotel infrastructure.

It is our view that the city of Durban, as a partner and a host city for Tourism Indaba, maximises on its investment, showcase (sic) the city to key international buyers and media. Our visitor strategy seeks to increase visitors to our city and Indaba is one of the key trade shows where we are able to show what our city has to offer and what trade buyers can take back to sell our destination. Successful hosting of Indaba carries a positive economic impact of over R140 million and we remain optimistic that Durban will remain to be (sic) the host city for years to come, despite of the challenges we have come across this year.  Durban Tourism is confident that visitors to Indaba 2014, (sic) will take their experiences to the market we seek to target and will result in additional visitors that we seek to attract as part of our strategy’.

Sithole appears to have forgotten that Indaba is funded and organised by SA Tourism, a national body which promotes tourism domestically and internationally for the country generically.  While Indaba has been held in Durban since its inception, and our local tourism industry would love to see it move to Cape Town, the tourism exhibition does not belong to Durban – it is merely the meeting ground for South Africa’s, Africa’s, and other source countries’ tourism delegates.  Indaba 2014 is over and out, and Wesgro couldn’t be more grateful for Durban Tourism’s outburst, in attracting national news coverage about its anger at Cape Town and the Western Cape, fabulous free publicity for our tourism industry, Durban scoring an own goal for Cape Town and the Western Cape, so to speak!
Chris von Ulmenstein, Whale Cottage Portfolio: www.whalecottage.com   Twitter: @WhaleCottage
Share
Tweet
Pin
0 Shares