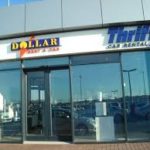 The Sweet Service Award goes to Thrifty car rental in Durban city centre, for coming to my rescue when I had forgotten to bring along my driver’s licence when traveling in KZN last week.  The company rules are that they cannot rent out cars without the driver’s license. I rented a car from the company eleven months ago, and was relieved when they were able to access a copy of my driver’s license from last year’s paperwork!

The Sour Service Award goes to Uber, for the very poor service I received from their driver Sindile on Monday 10 July, in driving me to Cape Town International. He did not stop at my front door, despite me waving at him and standing outside with my suitcase. He then gave me words about this, struggled to find Kfm in his radio, and was annoyed that I tried to direct him as to the most direct route to the airport. He was so annoyed with me that he told me to take another Uber, despite Uber having charged in full at the start of the journey.