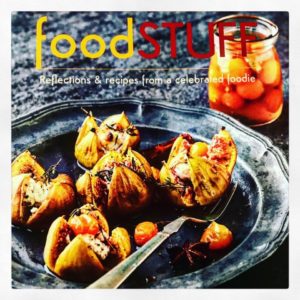 I was invited to attend the launch of journalist and restaurateur Tony Jackman’s new book ‘FoodStuff: Reflections and recipes from a celebrated foodie‘ at the Thursday Club lunch at Buitenverwachting Restaurant on Thursday. I was grateful to  Club coordinator Sandy Bailey for the invitation, and for seating me next to Tony, allowing me to ask him some extra questions for this story.

On arrival we were served a glass of Buitenverwachting Buiten Blanc, which also was paired with 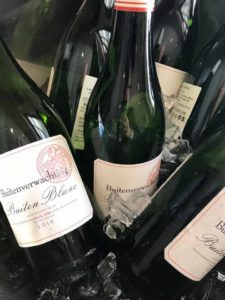 Tony is quite introverted, preferring one on one connections rather than a crowd, as he experienced at the official launch of his book on the stormy Wednesday, and at the Thursday Club event. Yet he is an entertaining speaker, and his school truancy on two occasions at two schools, the last one lasting about six months, was an entertaining story, especially as it meant the breakthrough start to his journalistic career.

Tony grew up in Oranjemund, in the then South West Africa, his parents coming from Yorkshire to settle in the diamond mining town in the south of what is now Namibia. He described having a ‘choppy childhood’! His long truancy and the financial support his mother required led to him leaving school in Std 9. Without a matric he was unemployable, until he met George Young from Independent Newspapers. Tony’s hobbies during his truancy was watching movies at The Roxy, and going to the Harbour to see the boats and shipping, and the latter was George’s beat. He 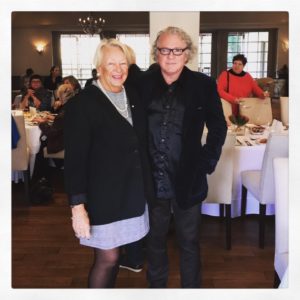 appointed Tony to update the daily shipping log, having had a truant past himself. Tony decided he would stay at the newspaper group for good, and eventually moved into arts and lifestyle journalism, writing theatre reviews, restaurant reviews, and eventually food writing, for the Cape Times Top of the Times, and Weekend Argus. An attendee lauded Tony for his honesty in writing his reviews, and said that he is missed in the Cape.

Tony and his wife Di were both employed by Independent Newspapers, and left when the current owner of the company took over. A two-year stint in owning a lamb-specialist restaurant in Sutherland was followed by a new project, in taking over the lease of the Schreiner Tea Room, which he renamed the Schreiner Bistro, in Cradock. Tony has been fascinated by the story of Olive 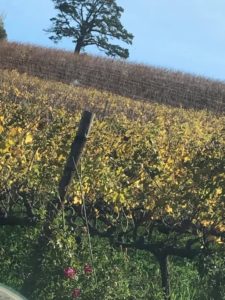 Schreiner, and her relationship with Cecil John Rhodes, about which Tony has written a play, one of four he has written. In the past year Tony and Di have lived in Grahamstown, but are heading back to Cradock at the end of this month, as both are now working for the online Daily Maverick, which makes their place of residence flexible. Tony is thinking of hosting dinner parties in his home, pre-booked and pre-paid, cooking from his book, plus adding other favorite dishes. Tony reminded me that he has previously written Restaurant Guides, but that ‘FoodStuff’ is his first book. He shared that he has always cooked in their home.  He likes eating ‘decent food’ and sharing it with friends, not needing to experience fine dining.

Tony expressed gratitude for the book happening, having been offered the publishing opportunity by Anneke Muller, steering the process. He praised photographer Myburgh du Plessis, stylist Sarah Dahl, and designer Catherine Coetzer for their work on his book, describing it proudly as ‘beautiful‘. The book contains sixty recipes, as well as an overview of Tony’s career and life. He said in answer to a question that the recipes in his book would be manageable to cook by a ‘reasonable home cook’. 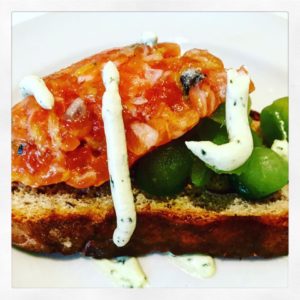 On arrival the Amuse Bouche of Salmon Tartare was already on the table. This was a dish created by Buitenverwachting Restaurant Chef Edgar Osijnik, and included dill crème fraîche, compressed cucumber, apple and celery salad, presented on toasted rye bread. 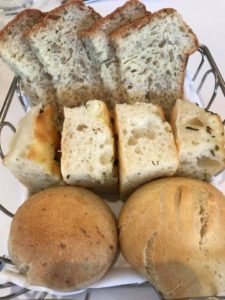 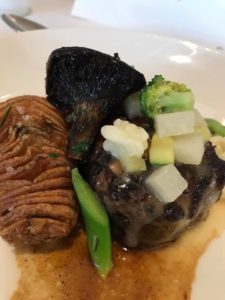 it to be excellent, Chef Edgar having put his stamp on it.  The hassleback potatoes were delicious, far more crispy than Tony would have prepared them, he admitted. The dish also consisted of vinegar vegetables, broccoli, a pine ring mushroom, and caramelised shallot. The oxtail preparation was praised at our table, 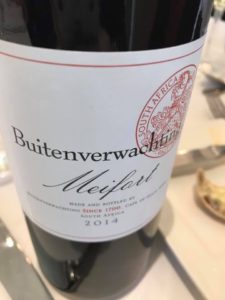 being stuffed with vegetables.

The dessert was referred to as ‘Toni’s Chocolate Tart’, intended 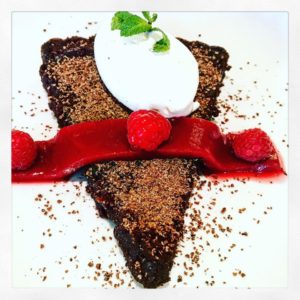 to
be spelt this way. It was also a recipe created by Tony, and fresh cream and raspberries were added to the pretty creation. My dry cappuccino order was presented as a flat white. As I did not have time for a second coffee to be made, I had to forego it. A platter of Friandise was brought to the table: 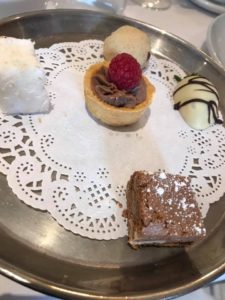 We were lucky with the weather, after the heavy storm of the day before, it being mostly sunny, with a light shower as I left. The Buitenverwachting Vineyards were yellowing, not yet showing rust autumn colours. It was a pleasure to catch up with Tony, and he proudly told me that their daughter Rebecca is getting married in August. He was chuffed to share that they have already sold 900 copies of the book since its launch the day before.