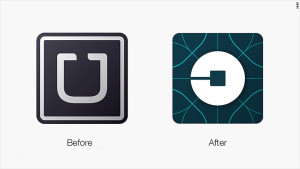 Four years since Uber was established with a very identifiable logo, it has changed its brand identity, probably causing a panic amongst regular Uber customers who have not seen the media communications about the identity change. Uber explains the identity change as reflecting a vastly different company from the one of four years ago.

Started as a small service for a group of friends in San Francisco, the company has grown into a ‘transportation network‘ of 400 cities in 68 countries, which has grown from only offering transport services initially, to delivering food specials, collecting clothing for charities, offering flu injections, and much more.

The new Uber logotype is described by the company as ‘more grounded and elevated‘, and is more substantial, reflecting how the company has matured. It is more visible, the company feels.

It has a ‘bit’ throughout the design framework, offering consistency, makes the brand recognizable, and highlights information.  Colour and patterns have been added to the previous white and black logo, to give the logo a ‘human side’. It appears that the logo design differs by country in which Uber operates.  ‘In Mexico, we were inspired by Mexican pink and the patterns in the local tiles; in Ireland, from the Georgian architecture and the lush greens; and in Nigeria, from the ankara, which came up again and again because of its bright colors and beautiful geometric patterns’.  The new South African Uber logo is green.