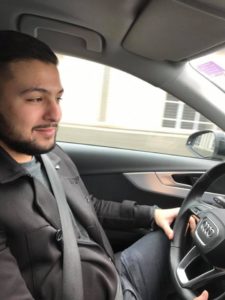 I have just spent close to a week in Nice and Paris, using Uber to and from the train station in Nice, as well as JAN restaurant, and to/from the airport and to/from top restaurants in Paris. I was astounded by the professionalism of Uber France in these two cities, and felt that Uber South Africa, or should I say Uber Cape Town, has a lot to learn!

I almost felt that Uber in the two cities, if not in all of France where it operates, has defined a code of operation, which resulted in my very positive impression of its UberX service:

#   They usually arrived ahead of the estimated time, by a minute or two, never taking longer than 3 minutes to reach my location

#   They all drove black cars, and top brands such as Mercedes-Benz, BMW, and Audi, with some Peugeot. The car brands were all UberX drives. One exception was a grey BMW.

#   The drivers all wore black, with a jacket and trousers. Only one wore grey (to match his BMW no doubt). One did have the (über) fashionable torn (black) jeans on.

#   Even when not traveling with a suitcase, the driver would generally get out of his car and open the door for me, both when fetching and collecting me.

#   All (but one) drivers spoke a reasonable English, and even apologized for not speaking it perfectly. We had lovely conversations.

#.  The UberX Pool Service blew me away, it being suggested to me at the Charles de Gaulle airport that I use the Pool service as they did not have individual cars servicing the airport. I shared with a lovely couple from Nice, and they started following me on Instagram, being interested in my restaurant journey in France. Another sharer was a charming young student, studying Statistics, and was excited in a most humble way about becoming an Actuary when he has completed his studies. He spoke excellent English, and it was a great experience to share such a long journey with him. The Pool Service cuts the cost by almost half, which is already much cheaper than traveling by taxi.

#   Not all, but some Uber cars offered me a bottle of water, despite it not being warm weather at all. One had sweets and peppermints in the car, and the driver enjoyed them too! Another had various size cellphone chargers, even though I could not get it to work on my phone!

#   All cars were very clean, except one.

Only one Uber drive was disappointing, being the last driver Ridha, who drove me from my hotel to Charles de Gaulle airport on Wednesday morning at 9h00. He did not speak one word of English, and hence there was no conversation. I told him at the beginning and at the end of the trip that my flight was from Terminal 2A, and that it was a British Airways flight. Normally drivers know from which terminals the major airlines fly. When I couldn’t find the BA check-in, I requested help, and was told that I was in terminal 2E! I was lucky to have enough time to find the correct terminal, and that I was in the correct building at least.

The quality of cars used for UberX drives in our country is shocking, largely being Toyotas. The drivers are not always the most friendly, and do not usually like to be directed in terms of the fastest route to use. The cars are not always clean inside or out. There is no uniform dress code. Usually the speed of arrival at one’s location is acceptable. There is no proactive shifting of the front seat to create more legroom. Uber RSA could vastly improve its service in our country, and should consider UberPool too, making the rides even more affordable, and therefore enhance business.

Note: Mohammed the UberPool driver from Charles de Gaulle airport allowed me to photograph him.