The Sweet Service Award goes to Uber, and its driver Zaid Fakir who drove me from the city back to my home. The radio in his vehicle was tuned to Kfm, and he agreed to up the volume as presenter Carl Waiste was playing very good music. When I had to take a call, he turned down the volume, and turned it up again when I had completed the call.  When I was in Johannesburg last month I noted that some of the Uber drivers asked one for one’s radio station choice! 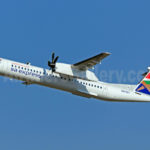 The Sour Service Award goes to SA Express, which flew from Bloemfontein to Cape Town last Saturday with the luggage of only half the passengers. One of the passengers affected was a friend from London, who had no spare clothing or toiletries with her. She was called by the airline at 7h00 the following day, but was charging her phone at that time, so did not get the call. When she called back, no one answered. She then had to drive to the airport to collect her bag!