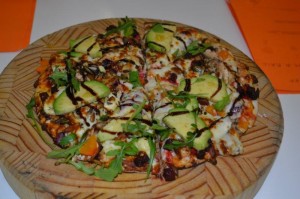 For the first time a vegetarian pizza has won the South African leg of the Global Pizza Challenge, Colin du Plessis from the Lady Grey restaurant in McGregor having been named as the local winner at Hostex at the Cape Town International Convention Centre last week.  He has won cash, as well as a trip to Melbourne in March next year, to participate in the Global Pizza Challenge, being one of 16 international finalists from countries such as Australia, New Zealand, Vietnam, Namibia, Italy, UAE, and Thailand.

Pizza makers from around the country, working in restaurants, stand-alone pizzerias, takeaway outlets, and hotels sent in their pizza recipes. A panel of internationally-recognised chefs evaluated the entries, and judged them on originality, balance, creativity, as well as their ‘excitement factor’.   The finalists were selected on the basis of their recipes, and the top 30 were invited to prepare their pizzas in a three-day cook-off held on the Global Pizza Challenge stand at Hostex.  Pizza lovers could enter in one of five categories:  poultry or meat, seafood, vegetarian, speciality, and dessert.  Colin’s winning pizza is named ‘Mary Queen of Scots’, reflecting the Scottish theme of his Lord’s Guest Lodge, where it is one of the popular pizzas he serves in the restaurant. The pizza consisted of roasted butternut, roasted beetroot, garlic, smoked mozzarella, black mushrooms, sprinkled with sesame seeds and pumpkin seeds, topped with rocket, avocado, and pine nuts, and drizzled with red grape balsamic reduction. Tabasco offered a R10000 prize for the best pizza using their product, and this was 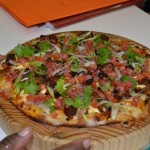 won by Priscilla Mbana from Khayelitsha, winning with her tomato bredie pizza with roasted red onion, almond flakes, mozzarella, cream cheese, and topped with a salsa sauce and Tobasco’s Smoked Red Jalapeno.  She has worked at Butler’ Pizza for 25 years, but her pizza is not on their menu.

The South African leg of the Global Pizza Challenge, ­which is endorsed by the South African Chefs’ Association, ­ promotes and encourages culinary innovation in pizza-making.  Pizzas are the world’s most popular food. The competition celebrates pizza-making as a ‘distinguished, passionate and noble livelihood’ and strives to advance the quality, diversity and popularity of pizza globally. 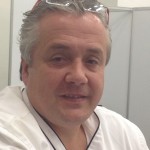 At Hostex I met Martin Kobald, Johannesburg-based Global Pizza Challenge South Africa co-organiser, with MasterChef SA Culinary Producer Arnold Tanzer, and he was impressed with the standard of the pizzas he had already seen, and the level of participation, telling me that Chef Rudi Liebenberg of the Mount Nelson Hotel was a participant.  He said:  ‘Every year our pizza champion hopefuls get more and more innovative, creative, and bold in their recipe suggestions with delicious and interesting flavour combinations.  I believe South Africa is among the leaders in world-class pizza creations and that this competition is spurring the pizza sector in South Africa to greater heights year on year‘.  He told me that the competition originated in Australia, when a cheese producer’s over-supply of mozzarella cheese led to the idea of hosting a pizza competition.  Chefs Martin and Arnold run the Africa and Middle East part of the Global Pizza Challenge.  Chef Martin came to South Africa from Austria in 1988.  He has been the Chairman of the South African Chefs’ Association for six years.

The organisation of the local Global Pizza Challenge from a media perspective left much to be desired, the original launch of the competition having been held at the impossible-to-find offices of Dish Food & Social in Observatory, with dreadful lighting for the photography.  The PR company was not present, being Johannesburg-based. The function was poorly attended, and the attendees had to make pizzas for their food.  We were promised by Chef Arnold that we would receive an invitation for the cook-off, but none arrived.  There was no acknowledgement of the blogpost written about the launch function, nor reaction to the Tweets sent.  As I was at Hostex anyway, I popped in at the Global Pizza Challenge stand, and met the friendly Chef Martin, who appeared horrified about the feedback about the poor launch function, and that the invitation to attend the judging had not been sent.  The media release was only sent out yesterday, four days after the local winners had been announced!