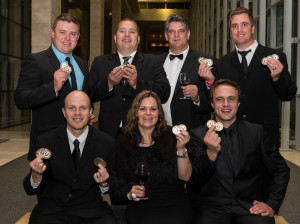 KWV, Spier, and Nederburg are our country’s top three wine estates based on the number of Double Gold and Gold Awards they received at the 2014 Veritas Awards Gala Dinner at the Cape Town International Convention Centre on Saturday evening, making up almost half the 51 Double Gold awards. The Veritas Awards are viewed as the ‘Oscars of the South African wine industry‘, with close to 1800 wines entered, a slight decrease on the number of 2013 entries.

KWV was announced as the Best Wine Producer for the fourth year running, and increased its Double Gold awards from four last year to seven this year.  KWV also won 2 Double Golds for its Brandy.  Spier has greatly enhanced its Veritas performance, with 7 Double Gold awards, compared to only one last year. Nederburg increased its Double Gold tally from four last year to six.  Flagstone won Best Performer in the less than 10 wines entered category, and the KWV won in the 11+ wines entered category.

Four wine industry legends Danie de Wet of De Wetshof, Diaan de Villiers, Professor Diko van Zyl (author of historical works on the history of the wine industry), and Jeff Wedgwood, were recognised as ‘Living Legends’, for their contribution to the local wine and brandy industries..

The Veritas judging panel included seven international judges, including MW and Cape Wine Master Lynne Sherriff,  Richard Rowe, the wine advisor to the King and Queen of Sweden Johan Larsson, and Denis Lahouratate of Bisquit Cognac. There were 118 local judges.  The judging was audited by Deloitte.

The Veritas Double Gold and Gold award wines are offered to taste around the country, with the sponsorship of Deloitte:

*   In Cape Town on 15 October at the Cape Town International Convention Centre (R150, book at Computicket)

*   In Johannesburg in the Sandton Convention Centre on 28 October (R160, book at Computicket)

*   In Durban at the Deloitte Head Office on 5 November (R110, book at Computicket)