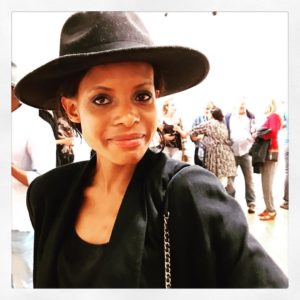 I have only recently got to know this lovely writer as Tshepi, who is a freelance writer for wine.co.za.  I photographed her at the opening of an art exhibition at The Gin Bar on Thursday evening.

Tshepi’s winning article ‘reflects on the country’s long walk to international relevance and pays homage to the pioneering attempts of individuals, regions and organisations that have empowered South Africa to walk into a fierce new era in global wine‘, according to the Veritas media release.  Tshepi also had to write a more informal Blogpost, and this she titled ‘Could Social Media Replace Traditional Wine Guides?’.

The announcement was made by the South African National Wine Show Association (SANWSA), custodians of the competition as well as the SA Young Wine and Veritas Awards, at the VinPro headquarters in Paarl. Commenting at the prize-handover, SANWSA Chairman Charles Hopkins said: ‘We are delighted to discover new talent whose voices communicate the message of wine enjoyment in a novel and thought-provoking way, thereby stimulating a culture of wine interest and growing a greater following of devotees for South African wine.’