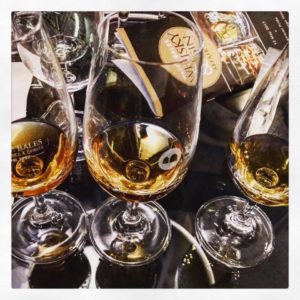 It was the first time that I attended a Wade Bales event last night, when it hosted a hugely successful Whisky & Gin Affair 2017 event, weighted to Whisky. My friend Llewellyn Lambert and I attended a Whisky Master Class, and learnt a great deal about how to taste a Whisky correctly.

The Wade Bales Whisky & Gin Affair was held at 15 on Orange Hotel, and sixteen Whisky and 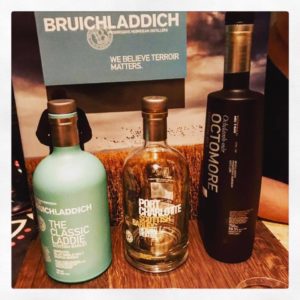 three gin brands each had their own stand, spread out over the hotel lobby. A total of 50 limited edition single malt whiskies were showcased and tasted by whisky lovers. Whisky brands on show included Aberlour, Ardbeg, Bruichladdich, Bushmills, Glenfarclas, Wolfburn, Glen 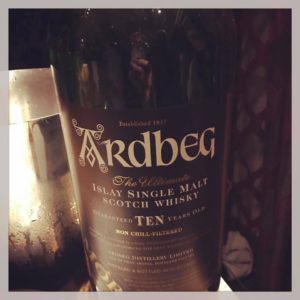 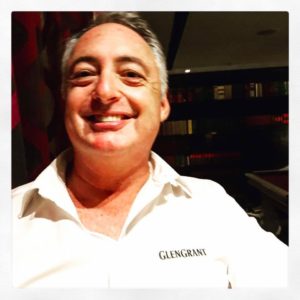 and Singleton of Dufftown.

Mr Whisky Bernard Gutman (right), who represented Glen Grant, took us on a tasting experience of the brand he represents.

Not being a frequent Whisky drinker, and never having 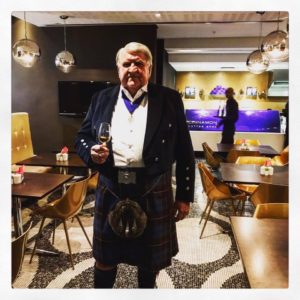 been tutored in Whisky drinking, I was delighted that Llewellyn and I were able to book the last two seats for the Whisky Master Class, which was led by South Africa’s top Whisky Master Pierre Meintjies. He was dressed the part in a tartan kilt, reflecting the recognition Pierre has received for his 47 year involvement in the Scotch whisky industry in our country, in its promotion and marketing. He is one of 159 Whisky Masters in the world, and until recently was the only Whisky Master in Africa. He has recently shared this honor with a female Whisky Master Karen Chaloner from our country.  He told us that Scotch whisky has traditionally had a peaty smoked smell and taste, peat being the ancient fuel of Scotland. Peat was traditionally used to heat fermenting barley, which stops the fermentation process. Modern techniques allow the barley to be blow-dried, 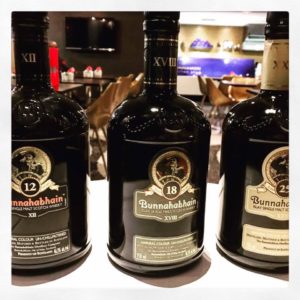 so these whiskies no longer have the strong peat taste nor smell.

We tasted three Bunnahabham whiskies, 12, 18, and 25 years old. They are made on the island of Islay, home to seven top distilleries. The smell and taste of whisky is influenced by the size and shape of the potstill, as well as the barrels used to mature the whisky, either sherry casks or bourbon casks being used. A Scotch whisky must have been matured in a barrel in Scotland for a minimum of three years, Pierre told us. No colour or other additives go into the whisky. If a whisky is a 12 year old, it denotes that the minimum age of the whisky is 12 years, but can contain whisky up to 17 years old. The same applies to the 18 and 25 year old whiskies.

We were told to hold the tasting glass by the stem, and to not cup it in our hands, not wanting to warm it. One swirls the whisky. To sniff the whisky one puts one’s nose into the glass, preventing ‘spirit burn’. We were told to treat the whisky we are tasting as we would an ‘old friend‘. A teaspoon of water is added to the glass before tasting it. The 12 year old Bunnahabham is light, fruity, and nutty on the nose. It is matured in 25% sherry and 75% Bourbon casks. Pierre told us that casks can breathe in and out, and often a salty taste can be detected when the whisky is matured close to the ocean. During maturation a whisky cask can lose up to 25% of its volume, the reason why whisky is expensive. We were encouraged to sip, swirl, keeping the liquid in our mouth for a respectable period to honor the age of the whisky, and then to swallow it. Once we tasted the whisky, we tasted a sweet honeycomb, dry, long, and lingering taste. The 18 year old Bunnahabham has sherry notes, and Pierre described the taste as a ‘full-on mouthwatering feel’, with the effect of the dominant sherry casks coming through. He described the taste of this whisky to be one of fruitcake. The 25 year old Bunnahabham costs R5500, and is matured in 10% sherry casks and 90% bourbon casks. Whisky softens with age, and Pierre described the taste of this whisky as that of Crème Brûlée, with a creamy and caramel mouth feel. Pierre said that the colour of a whisky is least important in its evaluation. He warned that an older aged whisky is not necessarily better than one of a younger vintage.

A whole new world opened up to me, in being exposed to such a selection of whiskies, and in having such a knowledgeable Whisky Master such as Pierre take us through such a detailed whisky tasting Master Class.

Llewellyn and I were invited by PR Lab to attend the Wade Bales Whisky & Gin Affair 2017.