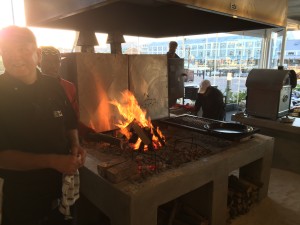 What a fun birthday party Jenny Morris laid on at the new location of the V & A Waterfront branch of Cape Town Fish Market, on the business side of the Waterfront, where Paulaner and Moyo used to be.  The restaurant has created The West Coast Village, complete with sea sand,  replicating a Strandloper-type restaurant, but just done better!

The Cape Town Fish Market space is massive, and can seat up to 600 patrons in 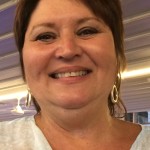 total, on a green artificial lawn outside, and inside too, a retractable roof allowing the restaurant patrons to sit under the stars if the weather allows it.   A minimum of 20 guests must book the West Coast Village, so that the food for this special menu can be prepped in advance.  We were seated at long tables, with Jenny’s friends, most sitting at tables set on the beach sand.  It is difficult to walk on it, and Jenny’s instruction to bring flat shoes was understandable in retrospect.   At the side of The West Coast Village area is a dedicated fireplace, at 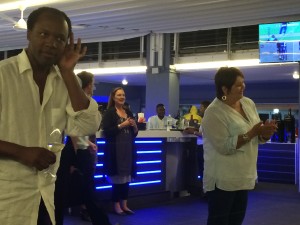 which the food is prepared, with a rounded serving top, on which the dishes for each course are placed, from which one helps oneself.  What was nice about that is that we got to see the guests at the other tables, and I spent time talking to bloggers and fellow Facebook friends Nina Timm, Anel Potgieter, Rosemary Gough, Tony Ward (our first real live meeting), and Aubrey Ngcungama.  Aubrey has an excellent voice, and led the singing of ‘Happy Birthday’ to Jenny. 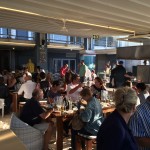 It was great seeing Michelle Ressel again, the new Marketing Manager at Cape Town Fish Market nationally, and previously at the ‘old’ and ‘new’ St Elmo’s.  She was on the floor the whole evening, making sure that everything ran smoothly.  The service was impeccable, waiters bringing water as well as wine, on a very hot evening. 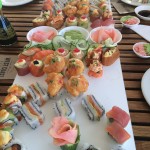 When I arrived the sushi platters had just been served at the table, and were attractively presented on large platters, which were shared by a section of the table.   This was followed by 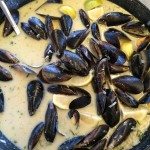 West Coast Mussels which were served in a creamy garlic sauce, with herb breads which Jenny had baked and brought along (usually they serve roosterbrood and roosterkoek), which one could eat with butter, snoek paté, grated cheese, and apricot jam, described as an ‘Appetizer’ on the menu.

‘Starters‘ were yellowtail, which had been grilled in lemon butter sauce, as well as beef fillet, which had been basted in a delicious sauce, perfectly grilled to medium 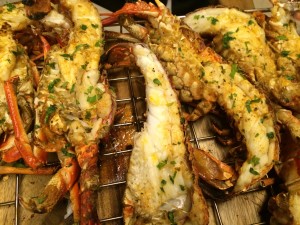 rare,  served with a green salad.  The ‘Mains’ were a Seafood Potjie, with prawns, mussels, calamari, fish morsels, in a spicy tomato sauce.   With this West Coast Crayfish grilled with lemon butter and a Marie Rose sauce were also served.

We sat and chatted and ate and enjoyed the wines and water, and should not have eaten any more.  But Jenny’s birthday cake had to be tried, as well as her Malva 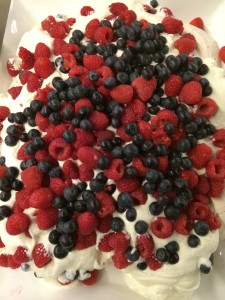 pudding with custard, and the most delicious Pavlova, for which Jenny had volunteered Rochelle and I from our table, as well as Rosemary, massive platters with a large meringue base, topped with cream, and then sprinkled with raspberries and blue berries – what fun, and delicious! 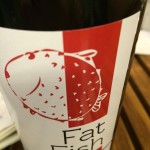 At the table I noticed a  bottle of Fat Fish, a brand of wine made by Van Loveren in Robertson especially for Cape Town Fish Market, Michelle told me.

The evening flew by, and we met lovely guests at our table.  We could have stayed even later and longer, had there not been work to return to!  Jenny had spoilt all of us guests rotten, and everyone had a magnificent time.