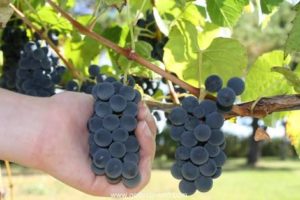 Vinpro has announced that the South African wine grape harvest ‘may be somewhat smaller than last year’, reports Daily Maverick.

Although the official Wine Harvest Report for the 2019 is only due in May, Vinpro revealed that the wine grape ‘berries and bunches are smaller, lighter and less dense than usual’, as a result of the three-year drought the Western Cape experienced.

‘This trend can be attributed to unfavourable weather conditions during flowering and set in October and November, as well as above average winds experienced at the start of summer’, said Vinpro’s Francois Viljoen. According to Daily Maverick, ‘Many vineyards, especially dryland vineyards, have not yet fully recovered from the effect of the drought, which also continued in the Klein Karoo region during 2018. According to Viljoen, the rainfall that occurred in March in certain areas of the Western Cape necessitated greater inputs to control disease, while rot will also contribute to losses in certain wine grape areas and farms. The Northern Cape’s weather conditions have been moderate so far, with normal yields being expected in this region’.