*   The wing of a BA plane with 182 passengers on board, rolling to the runway to London,  hit a building at OR Thambo airport in Johannesburg when the pilot allegedly did not follow the instructions re the runway to use.

*  The V&A Waterfront has completed a R 140 million upgrade, adding Pick ‘n Pay’s Western Cape flagship store now 6500 m² in size; created parking on the same level, having linked two different parking garages; and added 1400 m² upstairs by connecting two passages, expanding the size of Edgars, and adding four new shops.  Its CEO David Green says that there was little disruption to the operation of the mall, but many customers, including ourselves, have expressed their annoyance  at shopping on a building site for nine months.  On average they receive 60000 visitors every day, but they have had days of double that number (we question how they measure the visitors, not having an electronic car counter as they had in early days).

*   Justine Sacco, who achieved notoriety in writing the ‘worst Tweet of 2013‘,  appears to be on holiday in Cape Town, and has South African roots.  She is no longer working for her PR company employer, and has issued a statement of regret about her ill-advised AIDS Tweet.

*   The production of the movie ‘Mandela: Long Walk to Freedom‘ did not create jobs for 12000 locals, as claimed by the National Empowerment Fund, AfricaCheck has verified. The number is correct, but they were only used as extras for two days, reports The New Age. The National Empowerment Fund and the Department of Trade and Industry funded the production of the movie 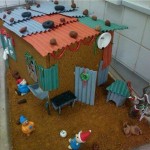 *   The Mount Nelson hotel has hastily removed its South African take on a Christmas gingerbread house, by depicting a township shack, with an apology.  The photograph went viral and trended on Twitter!