pasture-fed lamb from the Karoo.  Criticism has been leveled about the use of an Australian surfer who came third in MasterChef Australia in 2011, as the tour guide to our country and the guide to its sustainable food and wine treasure chest, a self-confessed ‘cooker’ and not a chef!  The dishes in the eight episodes to date have been as basic as salads, pizzas, and sandwiches, with a mussel pot and an Eton Mess too.  In some episodes the Woolworths punt has been so strong (i.e. the tomato growing) that it has become irritating, but of late the strong Woolworths promotion has been toned down. Surprising is the low-key advertising for Woolworths in its half-hour episodes, and is nothing as mouthwatering as the Woolworths’ commercials we have seen on MasterChef SA Seasons 1 and 2.  Nedbank is the other dominant sponsor, but is more visible as it flights advertisements in each show.  We’ll get back to Woolworths’ ethics a little later, given how the retailer is using ‘Hayden Quinn: South Africa‘ to position itself on the highground  of responsible product sourcing, and justifies its use of the Aussie as its recent purchase of department store chain David Jones!

Similarly, Woolworths’ sponsorship of MasterChef SA, now in its third Season, is intended to position the retailer as the source for all brands and not just its own label brands, the ethical sourcing of its products being far less pronounced to date, although using SASSI-listed Green and preferably no Orange, and definitely no Red-listed fish was the focus of episode 1 of Season 3.   Woolworths is overshadowed by Robertsons as sponsor in MasterChef SA Season 3, which causes a further irony in that the retailer does not stock this common-or-garden spice and dried herb range.

One would expect of a savvy marketer like Woolworths to be cleverer in its spending of the many millions of Rands on ‘Hayden Quinn : South Africa’, and on ‘MasterChef SA‘.  Why would Woolworths support the duplication of two TV programmes it sponsors to run simultaneously in the same week, as has been the case since three weeks ago.  Not only is staying home two nights a week to watch the programmes on Mondays and Thursdays (in addition to ‘Chopped South Africa‘ on Wednesdays, and the third season of The Ultimate BraaiMaster starting soon) overkill, but it means that the one programme may lose out on viewership, with Thursdays being the more likely one, being a busier night for events than are Mondays.  What interests me in particular, after a shopping visit 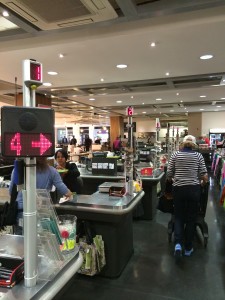 to Woolworths in St John’s Piazza in Sea Point,  is that there is no marketing collateral inside the Food department of the store for both ‘Hayden Quinn: South Africa‘ and ‘MasterChef SA‘, as there was in Season 1 of MasterChef SA.  Some stores even set up themed tables of produce to link to MasterChef SA in Season 1, while the marketing link to Woolworths stores was weaker in Season 2 already.  Now it is non-existent!

But it is not just the marketing aspect of Woolworths that is questionable.  Last week I noticed a pack of six guavas in the Sea Point branch, with a sell-by date of the same date, of which five were severely off, placed right in front of the shelf.  I could only Tweet about this when I had left the store, as Woolworths has suppressed all cellphone coverage in this store.  About an hour later I received a reply from Woolworths, asking me to notify a manager 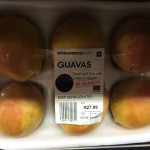 about the guavas!  Now surely that is not my job as customer?  I had tried to find a manager in the clothes department to complain about two of their staff in the Customer Service department chewing chewing gum, and was told that all the managers were out of the store to attend a meeting!   If Woolworths is so proud of its Sustainable sourcing of products, and is spending millions on ‘Hayden Quinn: South Africa‘, and has a department of Sustainability run by Justin Smith, how is it possible that it sells ‘vrot’ guavas that are still on the shelf, and have a sell-by date which had not yet expired?!

Another storm has burst about the Ayrshire milk which Woolworths sells under its own brand.  Grass is a Consumer Food Action group asking retailers and producers of foods some tough questions, and Woolworths seems to be receiving more than any other retailer!  Grass discovered, via a consumer, that half of Woolworths’ Ayrshire cows are not free-range, contrary to its TV commercial, as well as articles in Taste magazine (the Woolworths mouthpiece, of which the Food Editor is Eat Out editor Abigail Donnelly!).  Half of the cows are kept in a barn, in most unhygienic conditions, their Scottish origin make them sensitive to our country’s heat.  After pressure by the action group, Woolworths changed its claims of free-range and organic on its milk labels, to ‘produced from cows that are fed organic feed’!  There are other cases on the Grass website about Woolworths misleading consumers, including 85% of the soy content of its white bread, representing 1% of the bread, is Genetically Modified; oatmeal digestive biscuits were found to only contain 3% oatmeal; general misleading or non-declaration of GMO content, dubious pork sourcing, and more. Whenever Grass challenges Woolworths, the retailer amends its labeling.  Grass has asked Woolworths some more challenging questions, after its response to the Ayrshire milk criticism.

Last, but not least, is Woolworths importing tomatoes from Israel and peas from Kenya.  Surely Woolworths’ Sustainability department would not be spending millions on ‘Hayden Quinn: South Africa‘, attempting to convince consumers that it is ethical in its sourcing of products, when its carbon-footprint in flying these products in from other countries is negatively affected.  Is there really a consumer demand for tomatoes from Israel or peas from Kenya? Surely consumers would be happy with good quality peas and tomatoes, full stop!  Given the sensitivity around the war in Gaza, the tomatoes from Israel have become a political issue too, an action group calling for the retailer to not stock them, and its refusal to heed the request has led to a boycott of Woolworths stores, appearing to be having an effect on food and clothing sales, and its share price, it has been reported.

So, the bottom-line is that Woolworths is trying to soft-soak us via their sponsorship of the ‘Hayden Quinn: South Africa‘ (estimated at a cost of R 50 million for the 13 half-hour slots alone, and that excludes the cost to the production company and Hayden Quinn) and ‘MasterChef SA‘ TV shows, but behind the scenes it is not worthy of any consumer praise, as the retailer is continuously misleading its customers.  Woolworths once was the highpoint of top quality products, but many customers no longer shop there due to the products identified above, its high prices, and increasingly rude and incompetent staff.  They question how it is that Woolworths products can last so long, completely unnatural, and therefore welcome markets with fresh produce, of which an increasing number are springing up around the country.  Woolworths needs to pull up its socks, and go back to where it once was in terms of ethics, positive carbon footprint, and true sustainability!

39 replies on “What has happened to Woolworths? Misleads consumers, no link between TV shows and stores!”