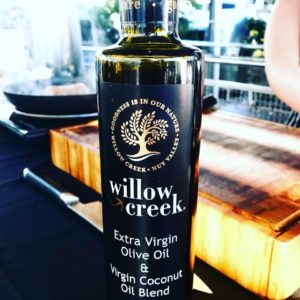 On Thursday, the hottest day of the year to date, a number of writers was invited to attend the launch of the new Willow Creek Extra Virgin Olive Oil and Virgin Coconut Oil Blend, held at the Sky Bar at the Grand Daddy Hotel in Cape Town.

We were welcomed with mojitos, and I requested a Virgin one, due to the heat, and the very 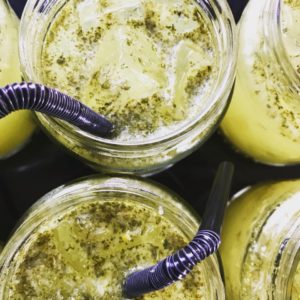 sociable day still lying ahead. Six Dogs craft gin was also offered, and was a popular choice on the hot day. 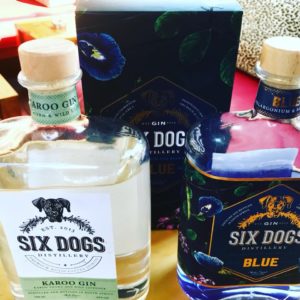 at the event, and we compared notes about losing weight.

The new olive oil and coconut oil blend was described as a ‘South African foodie first’. We were told that it is a tried and tested liquid Oil Blend, which will remain liquid even in winter. The olive oil from the Nuy valley near Worcester is blended with virgin coconut oil from a small producer in Mozambique, the bottle informs. 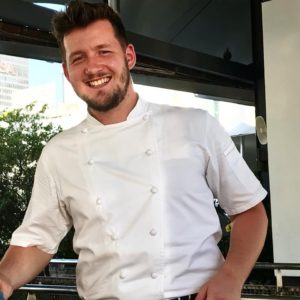 Morris and Matt Manning were invited by Willow Creek to do a cooking demo each, using the new Willow Creek Extra Virgin Olive Oil and Virgin Coconut Oil Blend, packaged in a smart black bottle, with white and gold lettering. 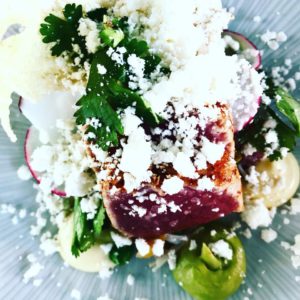 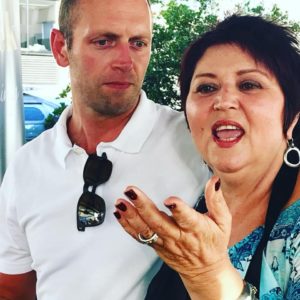 Chef Jenny Morris is always full of (naughty) fun, and she called Jan Braai to the demo table, to chat about adding salt and pepper to steak before or after cooking it. It does not seem to matter, it being far more important to not use a fork when turning the steak.

Chef Jenny called on Sabine Palfi to assist her, and she had to rub the new Willow Creek Olive and Coconut Oil Blend into the meat. Based on a show of hands, the steak was to be prepared medium rare. Chef Jenny told us that she drinks the Oil Blend daily, and that one can apply it to one’s skin too. 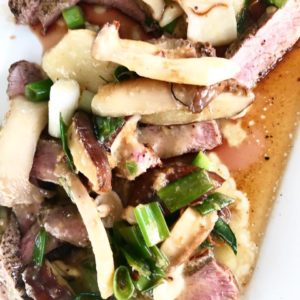 The new Oil Blend is a ‘marriage made in heaven’, she said. She was preparing an Asian salad, with beef fillet and enoki mushrooms as the major ingredients. To the steak in the pan, Chef Jenny added cumin, rock salt, Black pepper, lemongrass, the Willow Creek Oil Blend, garlic, spring onion, coconut milk, brown sugar, lime, sesame oil, and fish sauce. The end result was a delicious and colourful warm meat and mushroom salad.