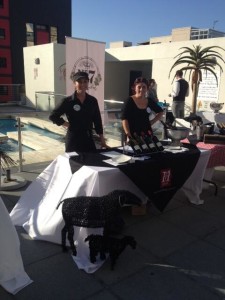 The Public Relations networking association PRNet recently hosted an inaugural ‘PRNET Trade meet your media’ event at Mandela Rhodes Place Hotel & Spa, focusing on the Wine Trade.  Cape Wine Master Clive Torr encouraged wine estates and writers to get to know each other better, so that the former can provide writers with information about what is unique about their wine estate and its wines.

Torr was introduced as a garagiste winemaker, and has spent time in the Napa valley.  He said currently ‘Chenin is flying‘, being so popular.  He noted that consumers are shying away from ‘austere wines’, looking for ‘lesser acidity‘ and ‘quicker drinkability‘.  He said that grapes are often picked too quickly, and warned that one should wait for ‘physiological ripeness‘, judged by the colour of the pip, and other factors.  He suggested that many of our local winemakers are German-orientated in their winemaking, having studied 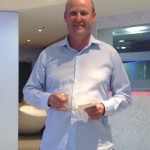 at Geisenheim, making them precise, clinical, adding what one is allowed, and controlling fermentation. One could sense that he supports the French style of winemaking, which is to add nothing at all, and to keep the wine making process as natural as possible. ‘It is time for transparency‘, he said, and intimated that this will increasingly be the future trend.  He was critical of Merlot production, saying that our winemakers are ‘floundering‘ in making it.  Riesling is not his favourite either, saying that it has ‘high acidity and little taste‘.  He talked about adding antibiotics, which is done locally, but is not allowed in the European Union.  He said that many wine drinkers are allergic to sulphur, feeling its effect the following day.

Should the threatened ban on advertising materialise, editorial coverage will be one of few means whereby coverage can be achieved.   He emphasised how important it is to stay in contact with the media, as it is free advertising if they write about one’s business.  The writers in the audience emphasised that they are looking for a good story, and a unique focus on the wine or wine estate will generate interest.  In the triangle between wine client, PR company, and writer, the wine estate must manage the process, not allowing the PR company to generate media releases for the sake of quantity.   Yet another new vintage media release, without a bottle to taste it, is an irritation, and can alienate the writer from the brand.   The brand should be linked to other aspects of the wine estate, to create cross-marketing.  Writers need relevant content, with more weight than received generally.  Social Media will gain  in importance when the advertising ban is implemented, and was described as ‘the tool of the future‘.

A neatly packaged booklet introduced each of the 18 participating wine estates, which proudly poured their wines for us to taste:   Avondale Wines (stands for ‘soil is life’, with soil, water and energy being a dynamic living system, Twitter @AvondaleWine); Avontuur Estate (describes itself as ‘home of Fine Wines and Fast Horses‘, growing grapes for the past 140 years, Twitter: @AvontuurEstate); Ayama Wines (based in Paarl); Creation Wines (based in the Hemel-en-Aarde valley, created 12 years ago, Twitter: @CreationWines); De Grendel Wines (based on Durbanville Wine Route, with beautiful views onto Table Mountain, Twitter: @DeGrendelWines); De Morgenzon Wine Estate (refer to their ‘garden vineyards‘ between 200 – 400 meters above sea level, play classical music to their vines, Twitter: @DMZwine); Dunstone Wines (in Wellington, and established eight years ago); 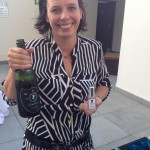 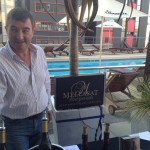 We enjoyed an entertaining evening debating the win-win marketing and media coverage relationship between media and wine estates, whilst enjoying some of the excellent wines offered to us to taste.  We did miss having PR companies present, as they are the link between the wine client and the writers, and many of our comments were aimed at them.  PRNET plans to host future such events, focusing on different industries.

Disclosure:   We received a bag with a 375 ml bottle of Zevenwacht Sauvignon Blanc 2013, an Ayama branded bottle opener, and a bottle of Ayama Extra Virgin Olive Oil, with the marketing material of the wineries which participated in the winetasting.

2 replies on “Winemakers and media need to get closer, to market wines better!”