The Sweet Service Award goes to Woolworths, and its new Manager Cliford Sibanda, who has just joined the Da Luz branch on Regent Road in Sea Point as a manager, having relocated from Johannesburg.  He came to my assistance when the staff member at the till was not responding to my questions, saying that she was ill. He apologised profusely, and was keen to hear what the problems are at the branch, having just started there.  He organised for some cheese puffs to be prepared, a favourite, which are always out of stock, and for a store assistant to push my trolley, demonstrating beyond expectation how important customer satisfaction is to him and the brand Woolworths! He will go far in the company with this service orientation. 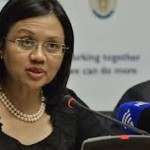 The Sour Service Award goes to Tina Joemat-Pettersson, Minister of Agriculture, Forestry and Fisheries, who is planning to have the Marine Living Resources Amendment Bill passed. The Bill contains a proposed clause which will make whale watching illegal if it does not have her personal approval: ‘A person may not undertake commercial fishing, small-scale fishing, operate a fishing processing establishment or engage in a non-consumptive use as determined by the minister, unless a right to undertake or engage such an activity or to operate such an establishment has been granted to such a person by the minister‘, reports BizCommunity.com. Complaints to the Minister about the amendment of the Bill have gone unanswered.