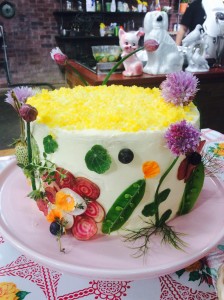 In episode nine of Koekedoor Season 2 only five contestantys out of the initial ten are left to fight out who the winner will be in the remaining five episodes. The second season has now reached the halfway mark, not in terms of the number of episodes, but in terms of the number of contestants that remain. Pre-prepared/convenience items available to bakers also formed the focus of the episode.

Not being able to view the episode on Thursday evening, I am grateful to Koekedoor Content Manager and PR consultant Errieda du Toit for her notes about the episode, despite her busy schedule.

Judge Elizabeth Cloete set the challenge to the contestants, wanting them to bake muffins within 1½ hours, with the proviso that they be a healthy wholesome breakfast snack rather than be prepared in a cupcake-style.

Errieda comments as follows: ‘I am quite fascinated by the transformation of muffins from a wholesome home-bake to the mega-muffins produced in factories and bakeries. Until the seventies the smell of just-baked muffins were part of the morning breakfast ritual in many homes.  As women entered the workplace,  they baked less and less and ‘home-made’ lost some of its appeal. Then also in the 70’s came the health craze and everybody jumped on the band wagon of the ‘healthy hippy muffin, made with whole wheat, bran, dried fruit. But as Mom no longer had the time to bake herself, bakeries saw the gap and started making ‘health’ muffins, but to give it a longer shelf life added lots of sugar and fats. Then the coffee revolution and coffee shops came along, and saw in the muffin a bake with big potential to pair with coffee …. The mega-muffin with more calories than cupcakes! was born.  So our appeal with this challenge was to bring the wholesome muffin back home, something that’s easy and economical, and still interesting. Proud to be a muffin, rather than cupcake’s ugly cousin. The use of preserved products and convenience products was allowed, e.g. canned corn, ready-made pesto, etc’. 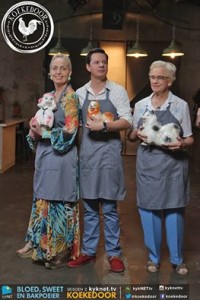 pantry or fridge, tinned or bottled etc. Normally Koekedoor is about making everything from scratch! The era portrayed was the ‘Seventies, and pre-prepared or ready-made products were the rage to lighten the burden for women that entered the workplace and didn’t have time to make everything from scratch, as did their mothers and grandmothers! As Tannie Elizabeth and the other judges emphasize – you can still get the home-baked, home-made touch, depending on what you use and how you use it.  Wilandi impressed in this challenge with her bacon and apple wholewheat muffins, using tinned apple, ginger, honey, and sour cream, each of the ingredients complementing the bacon.

Wessels used the time very well, effortlessly making three muffin varieties, being maize meal muffins to which he added tinned corn kernels;  wholewheat muffins with sultanas – and to incorporate a tinned product he used evaporated milk; and cheese and onion muffins, using fresh spring onions and mustard.  Corli went Mediterranean with her tomato, basil, and feta muffins,  using basil pesto as her ‘convenience’ product.  Kanya made cheese and biltong muffins, adding wholewheat flour and as convenience product the tinned corn kernels and powdered finely shredded biltong, which was very popular with the judges. Sanet made basil pesto and olive muffins, with white cheddar. Instead of butter she served it with homemade tzatziki (yoghurt with cucumber) as a spread.

To bring in the ‘Seventies ‘look’, the contestants were given paper daisy cutouts on sticks to ‘prettify’ the muffins. 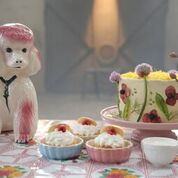 The baking challenge created by judge Mari-Louis was based on a kitsch theme, going back to the ‘Seventies, and was a Scandinavian Smörgåstårta. While looking like an ornate iced cake, it actually is a savoury sandwich cake, a retro-bake that was designed in the 1970’s by a Swedish chef to form part of the lavish bread buffets these countries are known for. Not even the Swedes, otherwise known for their contemporary designs, escaped the era of food kitsch!  Smorgastarte is sliced just like a cake.

Once again the contestants only received a recipe and did not see a completed cake in advance.

The seventies also saw the return of whole wheat flour – Nutty Wheat became a household name in South Africa at that time. Every one baked seedloaf – and it’s this whole wheat bread that forms the base of the ‘cake’. It’s ‘iced’ with cream cheese and layered with savoury fillings. They were required to decorate it in the 1970’s design aesthetic. Grated hard-boiled egg was used as topping, resembling lemon rind as one would decorate a cake.

In addition the contestants had to bake a Swedish traditional ‘semlor’, being cardamom bread rolls, eaten prior to 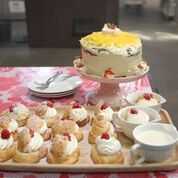 Lent with whipped cream and warm milk. The cardamom rolls had a filling of pistachio nuts, and whipped cream decoration; served with cinnamon milk.  These were so delicious that the contestants wanted to take the recipe home so they could bake them again!

What made this very challenging is that both bakes are made with yeast, and both needed the same amount of attention. Wessels excelled, while Wilandi battled.

Judge Tiaan Langenegger set the Pronkgebak challenge, being a phyllo challenge, contestants having to recreate a dough which goes back 800 years, and is paper thin. The contestants were challenged to create a dish with phyllo, doing justice to the creative opportunities it presents. They were provided with ready-made phyllo for this challenge. It is only in the 1970’s that machinery was developed to produce phyllo pastry on a commercial scale as a ready-made product. Judge Mari-Louis pointed out that phyllo bakes have become very boring – and the Koekedore had to make something truly spectacular with this remarkable dough.

Each contestant received a retro-tray to serve their creations on – Wessels couldn’t get over the floral tray! He made a stunner, consisting of many elements; from a citrus cake as a basis for a custard tart, inspired by the Greek galaktoboureko. He made a strawberry apple filling for the strudel-like part of his design. Quite groundbreaking was his technique to colour the 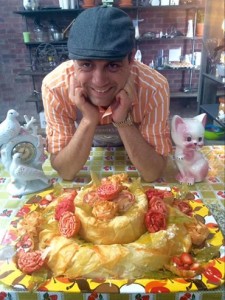 phyllo dough, and to cut it with scissors to resemble flowers.

Kanya named her creation the ‘Phyllo Spectacle’, consisting of 36 ruffled phyllo tubes, inspired by Turkish and Greek baklava, using flavours of cinnamon, walnuts, cardamom and pistachio nuts, complemented by rose water. She also made very interesting phyllo strands – cutting up the dough resembling strands of pasta, which she loosely rolled to form phyllo roses. She constructed a phyllo band coated with chocolate butter, and made it into a circle, as a container for the phyllo tubes.

Wilandi just didn’t do enough – where she was expected to really turn up the volume she put effort into creating phyllo frills to cover a milktart base, not showing enough technique or imagination for the time that she had available to construct the formidable phyllo creation expected. Her excellent muffins were just not enough to save her, and she was eliminated at the end of the episode.