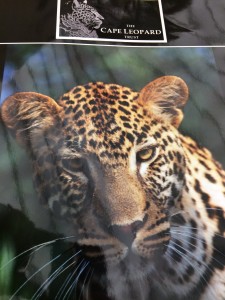 Yesterday The Cape Leopard Trust’s celebrated its 10th anniversary with a Charity Auction lunch at Leopard’s Leap, a perfect synergy between the good work done by the Trust, and the winery’s focus on leopards.  We were treated to a fine feast prepared by three chefs, and all left happy that R519000 was raised for The Cape Leopard Trust.

Barbara Lenhard and Florian Gast of Opulent Living are an amazing powerhouse couple in organising events, in addition to publishing their Opulent Living magazine.  They managed to attract 180 guests, at R1500 per head, to attend the Charity Lunch on a picture perfect day in Franschhoek.  Outside Marco Cianfanelli’s sculpture of a leopard welcomed arriving guests. We were offered a glass of Leopard’s Leap Culinaria Brut MCC on arrival, and were shown to our seats, where we were lucky to have great company, including Darryl from The Light House in Paarl, and Dr Tracey and Brett Garner.  Elana Afrika-Bredenkamp of the Expresso Show and her husband Ian 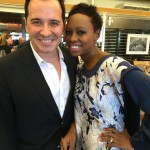 Bredenkamp of Kfm and Cape Talk were the MCs, keeping a steady pace for the proceedings throughout the afternoon, interviewing chefs, the performers, and sponsors, which included Mercedes-Benz, FNB, and cennergi.

The outgoing CEO of the Cape Leopard Trust, and its founder, Dr Quinton Martins, became very emotional when he spoke, close to tears in seeing so many guests attending to benefit his Trust, of which the running will be taking over by Bryan Habbana.  He was doubly moved by the fact that most guests who attended have never seen a leopard.  He highlighted that the Trust goes far beyond conserving leopards, but is about the environment generally.  One of the projects is to control predators from killing farmers’ livestock in the Karoo and Namaqualand. Work is also done in the Boland and 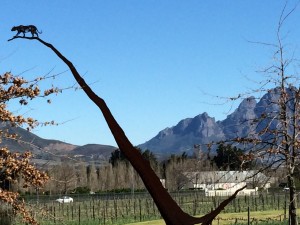 Cederberg.   Hein Koegelenberg, CEO of Leopard’s Leap, was unable to attend, just having been discharged from hospital, but sent his greetings, and was represented by his Marketing and Sales Director Marius Kotze.  The winery has supported the Cape Leopard Trust since its inception.  They have adopted six leopards, three in the Cederberg and three in the Franschhoek/Wemmershoek mountains, with cameras filming their movements locally.

The lunch preparation was a collaboration between three chefs.  Neil Jewell of Bread & Wine 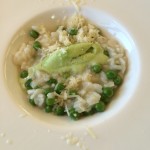 offered his charcuterie, which was already waiting on the table when we were seated, with a variety of breads.  He also prepared the starter, which was a risotto of MCC, truffle oil, and peas, topped with Parmesan, and sprinkled on the rim of the plate too.  Chef Pieter de Jager (below) from Leopard’s Leap and his team prepared the main course, which was a collection of 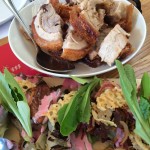 beef, chicken, and pork prepared on their rotisserie, served with an interesting salad of artichoke and skinless tomatoes; potato dauphinoise, which looked interesting in its red, rose and white presentation, the top layer of beetroot giving it the colour graduation; a roast butternut, orange, and sesame salad; served with Grand Vin jus, and apple sauce.   The dessert was prepared by now dark-haired Vanessa 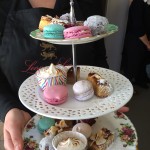 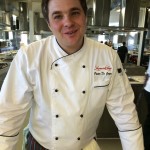 The auctioneer struggled initially to loosen the money bags, but once on a roll, the bids for the thirteen lots exceeded the value of the auctioned items, to generate R519000, which will go to the Cape Leopard Trust.

It was a most enjoyable afternoon, with good company, good food, and good wines, all for a good cause.  I was invited by Opulent Living to attend the Charity Lunch.