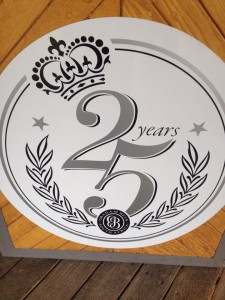 Yesterday 30 or so writers, mostly from Cape Town, dedicated a full 10 hour day to travel to Graham Beck Wines in Robertson, to celebrate its 25 year Silver Jubilee with a vertical tasting of more than 25 Cap Classiques and base wines which go into the making of the Graham Beck range of MCCs.  The event was also a salute to Pieter 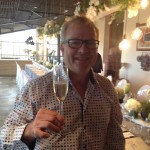 ‘Bubbles’ Ferreira, in having worked at Graham Beck for 25 years already.

Always organised, PR consultant Nicolette Waterford had organised a Le Quartier Français snack pack with water and juice for us for the two-hour bus trip.  We arrived to a misty day in Robertson, but the day became sunny and warm.  We were welcomed by the Graham Beck staff, and by Pieter with his trademark bubbly shirt in particular, and it felt a lot like Pieter’s ‘birthday’ party (he did recently celebrate a special milestone birthday). 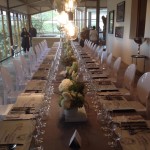 We had a walk through the tasting room, in which one long table had been set up, with the most amazing flower decorations created by Okasie over the length of the table, including proteas, chrysanthemums, and orchids.   Bottles of 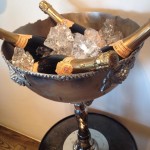 Graham Beck MCCs were presented in the most beautiful coolers, adding extra class to the decor.  On the wall in the tasting room paintings by Maurice van Essche, Karel Nel, and Irma Stern added splashes of colour to the celebration venue.

We walked to the cellar, with an interesting choice of colour of pink for the entrance door, and
here we were divided into two groups, one led by Pieter and the other by his right hand Pierre 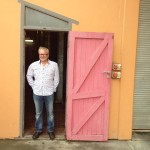 de Klerk.  The two have worked together for five years. Pieter and Pierre have been running tests, to taste the impact of a number of factors which can influence the taste of their MCCs, always in pursuit of ‘the perfect bubble’.  We tasted the impact of corks supplied by three different suppliers, one from Champagne, another from Spain, and a third and most used by Graham Beck Wines being Amorim from Portugal. They do regular cork checks, to ensure that what they use is the best for their MCCs. Pieter made it clear that screwcaps would never be suitable for sparkling wines, taking the romance out of opening a bottle with a pop.  Next we tasted the effect of bottles of MCC standing upright (i.e. the liquid in the bottle does not touch the cork) or stored lying down, and the former was better. Currently Pieter and Pierre are testing the effect of the crown cap on the taste of the MCCs, some allowing more oxygen into the bottles.

We then tasted the influence of vintages, the 1993 Blanc de Blanc not making a sound when Pieter removed the cork. It had spent 17 years on cork, having lost its bubble over the 23 years.  It had yellowed over time, but Pieter said that the cork had been a good fit.  Many liked its Crunchie honeycomb taste.  We tasted an even older MCC, a 1991 Blanc de Blanc, which had spent 6 years on the lees and 19 years on cork.  It had hardly lost its bubble in the 25 years. Pieter and Pierre are still researching the effect on taste of the length of time on the lees relative to time in the bottle.  Pieter proudly mentioned that there would be no other MCC producer that could offer 25 vintages of MCC with bubbles still in them, as they can at Graham Beck, due to their attention to detail.  His mantra in making Cap Classiques is ‘Consistency and Continuity‘.

We then tasted the individual components of Pinot Noir and Chardonnay making up the MCCs.   We were astounded that the MCCs are made from a recipe of 72 different components.  We tasted various clones of  Chardonnay, from their clonal vineyard which they first planted in 2005.  Each clone adds a dimension to the MCCs.  Pinot Noir comes from their Robertson and Firgrove vineyards, and they buy in 11% from Elgin (Shannon), De Grendel, and Slanghoek in Rawsonville. Pieter and Pierre travel 5000km per month jointly, to visit the vineyards from which they source their grapes.  Last, but not least, the impact of dosage was tasted. 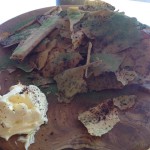 After all that tasting we returned to the tasting room, to enjoy more Graham Beck MCC, this time a Brut NV Magnum 1994, and tasted canapés prepared by Chef Margot Janse of The Tasting Room and her team.  The wild 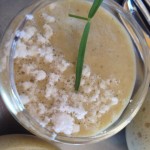 mushroom bark with Fynbos icing tasted better than it looked, but the oyster mignonette was delicious.  At this point my phone battery had run out, and I was grateful to have an opportunity to charge it again, so as to photograph the lunch to come.

We sat down at the beautifully decorated table, and I sat next to Pieter’s wife Ann, who Pieter must have married for her bubbliness.  Opposite me sat Pierre and his French partner Julie 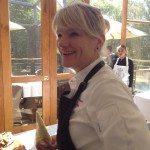 Breuzon, equally bubbly!  Pieter said that they had chosen Chef Margot to prepare the lunch, in having had a long association with her in pairing MCCs and food for events over the years.  ‘We understand each other’s philosophies‘, he said.  She congratulated Graham Beck and Pieter on their 25 years, and announced that she will celebrate her 20th year at Le Quartier Français this year. She explained that her menu for the event was not just local, but had a French slant too, given Pieter’s love for food from that country.

The first course was the best as far as I was concerned, a rich, creamy, and more-ish foie gras brûlée with Klein River 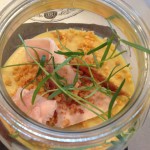 Grana Padana, crunchy onion, and topped with ‘Karoo-plaashoender‘ and wild pea.  This was paired with Graham Beck Cuvée Clive 2009, the flagship MCC in the Graham Beck stable. Pieter explained that they only make it in exceptional years, a MCC made without rules and only when he and Pierre get the ‘WOW’ feel.

I had asked Pieter about the chronological development of Graham Beck Wines, and he shared this with the table. Mr Beck bought Madeba farm in Robertson in 1983. Pieter joined the farm in 1990, having previously worked for Achim von Arnim for seven years in making his MCC. Pieter set about producing the maiden vintage of Brut in 1991, Lonehill Chardonnay in 1992, Railroad Red (a Shiraz and Cabernet Sauvignon Blend) in 1993, and Blanc de Blanc MCC in 1995.  Erika Obermeyer joined the company, heading still wine production. Sadly the Franschhoek farm was sold.  Pieter emphasised that they are fulfilling Mr Beck’s vision. 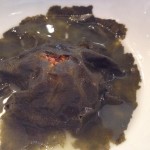 The second course was better tasting than it looked, being octopus from the Cape of Good Hope, red onion, and soil, covered with a seaweed and sole nori, over which a warm cucumber and horseradish consommé was poured at the table.  This (very odd and unattractive) dish was paired with the sugar-free Graham Beck Brut Zero 2005.

It took some time for the main course to be finalised, so Pieter and Pierre took 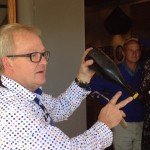 everyone outside, to demonstrate a la volée, which is the art of removing the yeast at the top of the bottle without freezing it, using a 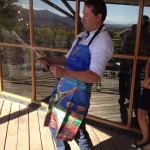 special tool, and pushing the cap downwards. Some of the guests were invited to try it too, and it caused great excitement when others were sprayed as a result!

The main course was suckling pig (from the Hemel-en-Aarde valley) bush braai, a delicious tasting French style mash with cheese called aligot, with country vegetables, labneh, Kapokbos and a Fynbos gravy. The French-origin Julie and Christine Lundy were in seventh 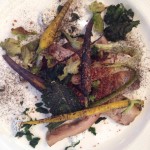 heaven about the aligot. This course was paired with the maiden vintage Graham Beck Brut 1991. 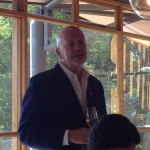 At this stage wine writer and art critic Melvyn Minnaar made an impromptu speech, congratulating Pieter on his ‘art’ of MCC-making.  He encouraged us to appreciate the valuable artworks on the walls of the tasting room. He proposed a toast to Graham Beck Wines on its 25 year celebration. It is he who gave Pieter his ‘Bubbles‘ nickname.

The dessert was quince almond crumble, over which salted (coming from the 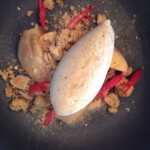 rare Baleni salt pans in Limpopo province) caramel custard was poured by the waitrons at the table. This course was paired with Graham Beck Brut Rosé 2006. 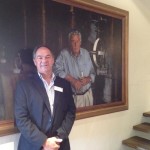 Graham Beck Enterprises CEO Chris du Toit told me that it is a privilege to have Pieter working for the company for so long, having been there since the establishment of the wine side of the business.  Pieter was named the 2004 Diners Club Winemaker of the Year. He posed next to a painting of the late Mr Beck.

The Graham Beck Silver Jubilee pack copy reads as follows: ‘Celebrating 25 years of consummate craftmanship. Silver – the precious metal associated with a 25th anniversary – perfectly encapsulates the twenty-five years we’ve spent honing our craft, each harvest more rewarding than before. Both delicate yet dazzling, the qualities of this element echo the milestones in our pursuit of perfection. This extraordinary journey has seen Graham Beck become a much loved and lauded brand across the world. Popular with global icons and enjoyed by consumers who care, our wines have become synonymous with timeless elegance and delicious drinkability. Join us as we raise our glasses to honour the past, celebrate the present, and savour the tantalizing promise of tomorrow’.  President Obama, the late Nelson Mandela, Bono, the British royal family, as well as the Swedish Royal family count amongst the Graham Beck MCC fans.

We had a most enjoyable day at Graham Beck, enjoying the festivities, and were moved by the emotion which Pieter showed on this very special day.

Disclosure:   We received an apron and a magnum of Graham Beck Silver Jubilee MCC with our media pack.