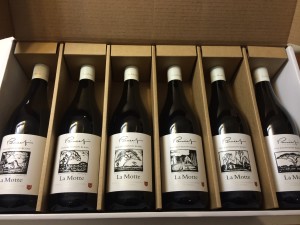 La Motte has changed the packaging of its Pierneef Collection range, bringing the J.H. Pierneef lino cut prints to the front label, having originally been launched with prints of the valuable artworks on the back label.

The late artist Pierneef, said by many to be our country’s best artist ever, has made an important impact on La Motte, his lino cut prints collection having been used by the wine estate for a number of years.  In negotiating the right to use the prints, of which Hannelie Rupert-Koegelenberg had received a set of 128 prints as a gift from her father Dr Anton Rupert, she and her husband Hein Koegelenberg got to know Pierneef’s daughter Marita Bailey, who lives in the UK.  Mrs Bailey approached the Koegelenbergs to buy the private family collection of Pierneefs, which they agreed to, and they built a special gallery and museum to house the works of art.  It did not stop there.  As La Motte was building a restaurant (and a new Tasting Room as well as Farm Shop) at that time, it was decided to name the restaurant Pierneef à La Motte, wishing to associate the success of the artist and his pursuit of excellence with that which they planned for the restaurant. Pierneef lino cuts from the collection have been hung in groups in the restaurant, in the Tasting Room, and in the entrance building.   The backs of the bar chairs at the kitchen counter in the restaurant carry a photographic image of Pierneef and his daughter.

By bringing the Pierneef lino cut to the front label, the art of wine-making as well as La Motte’s dedication to art and culture is enhanced. The artwork used for each of the six bottles carries the name of the work as well as Pierneef’s signature.   Every year six new lino cut prints will be selected for the Pierneef Collection Sauvignon Blanc and Pierneef Syrah Viognier.  The impressive presentation box also contains a lino cut print, being ‘Baobab, N.T.’ on the 2014 Pierneef Sauvignon Blanc, and ‘Kaaps Hollandse Huis, Kromme Rivier, K.P.’ on the 2012 Pierneef Syrah Viognier.

The 2014 Pierneef Sauvignon Blanc is a Wine of Origin South Coast, and is made from grapes from Elgin, Bot River, Elim, and Napier, with 10% Semillon from Bot River added to the blend. The cost is R115 per bottle and the Collection pack at R690, and is available at the La Motte Tasting Room.  The Pierneef lino cut prints used for the 2014 Sauvignon Blanc Collection are ‘Bome en Berge Soutpansberg‘, ‘Doringboom en Veld’, ‘Doringboom in Landskap‘, ‘Doringboom, Mariënthal S.W.A.’, ‘Straat in Tulbagh K.P.’, and ‘Uniegeboue vanaf Prinsenhof’.

The 2012 Pierneef Syrah Viognier is a blend of 89% Syrah and 11% Viognier, made from Elgin and Franschhoek grapes. One bottle costs R211, and the Collection pack R 1266, and is available at the La Motte Tasting Room. The Pierneef lino cut prints used for the 2012 Syrah Viognier Collection are ‘Berg en Wolk‘, ‘Kruiskerk, Tulbagh K.P.’, ‘Miershoop S.W.A.’, ‘Ou Huisie, Silverton‘, ‘Plaasgeboue’, and ‘Tweelingpieke, Stellenbosch‘.

Disclosure: We received a gift pack of the 2014 Pierneef Collection Sauvignon Blanc.