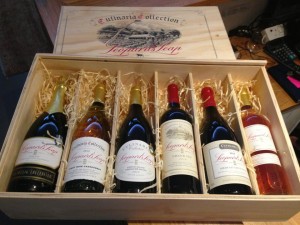 When superb wine marketer and CEO Hein Koegelenberg is involved in a project one can expect it to be of a superlative quality, reflecting La Motte’s slogan of ‘A Culture of Excellence’. So it was on Wednesday, when we were invited to attend the launch of ‘sister’ wine brand Leopard’s Leap’s new Culinaria Collection of six wines, a range developed on the basis of terroir, inspired by the regionality of French wines, and its suitability for different food types.  It is the first wine range to specifically link wines with food, even though it is the most common usage and enjoyment of wine.  It is a break from marketing wine as a product, which leads to an expectation of 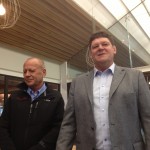 discounting, and focuses on the food and wine experience instead.

The six Leopard’s Leap Culinaria Collection wines were developed by Cellarmaster Eugene van Zyl, who has been at Leopard’s Leap since its inception. He reminded us that South Africa has some of the oldest soil in the world, Malmesbury shale being up to 250 million years old, and is well-weathered and structured.  In developing the Culinaria range, the emphasis was on finding the right balance between the wines and the food combinations.  Pieter de Jager, Chef of The Rotisserie at Leopard’s Leap, spoke about food and wine pairing principles: 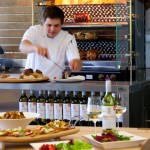 #   The weight of the wine and of the food must be balanced.  Full-bodied red wine is suitable for beef, medium-bodied wines are best paired with chicken, and light fruity wines are perfect for Asian style food.

#   The flavour intensity of the food and wine should balance.

#   The five taste sensations (sweet, sour, bitter, salty, and umami) must be in balance in the wine and the food. 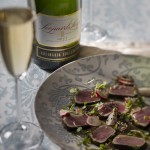 and 15 % Pinot Meunier, with grapes from Franschhoek, an area which produces ‘world class’ Pinot Noir and Chardonnay grapes, Eugene said.  Chef Ryan Smith from Ryan’s Kitchen was tasked to develop a dish to pair with the MCC. He prepared a Tuna sashimi and horseradish salad with a vinaigrette he made with the MCC and lime zest, which cancelling out the bitterness.  Heavier dishes with more flavour and more acidity could have been paired with the MCC too, Chef Pieter said.  Cost is R95. 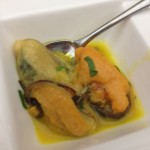 Culinaria Chenin Blanc Grenache Blanc 2012:   The grapes come from Voor Paardeberg bushvines, which experience harsh conditions, with hot days and cold nights, giving the wine a ‘beautiful intensity’.  The Grenache Blanc gives structure and finish, with a white pear flavour. Overall a wine inspired by the Loire-style, with a fruity character, light, and food-friendly. Chef Neil Jewell from Bread & Wine across the road was inspired to prepare West Coast Mussels with Café de Paris butter, with a very light curry flavour, favoured by many as the best pairing of the six.  Price R65. 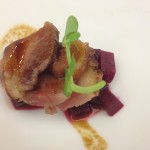 Sauvignon Bordeaux-inspired blend made from grapes from Devon Valley. The area has sandstone, granite, and coffeestone, both wine varieties being of the most difficult to make, Eugene said, due to them being so terroir-specific.  Flavours of mulberry, cherry, and black currant.  Chef Reuben Riffel of Reuben’s was given this pairing challenge, which was pan-roasted duck breast served with pickled beetroot and a jus, for which he had used the Grand Vin and stock he had cooked from the duck bones.  He had cured the duck overnight, to extract its moisture. Price R89.

*   Culinaria Shiraz Grenache 2010: The grapes were sourced from Bot River, a cooler valley in which the sugar levels have been increasing, as high as 14%, Eugene shared about this Rhône-inspired wine. Red berry flavours, with a touch of black pepper. A drop of Cinsaut added too.  Chef Chris Erasmus from Pierneef à La Motte had paired this wine with a bold Lamb Tagine, a rich and spicy dish to which he added six spices, including cloves, nutmeg, cayenne pepper, and black pepper, and cooked it for four hours, served with Basmati rice.  Price R89. 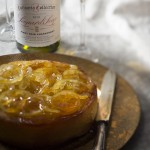 Culinaria Pinot Noir Chardonnay 2012:  The grapes come from Elgin, described by Eugene as ‘Little Burgundy’, for its elegant Chardonnay and Pinot Noir grapes, a 40%/60% blend made in the Burgundy-style. The Pinot Noir gives structure for the food pairing as the soils are rich in iron in this region.  Cooler temperatures means that the grapes are slow to ripen.  Beautiful rose blush colour. Strawberry, raspberry, red currant, pomegranate and plum flavours. The wine was paired by Chef Chris Hoffmann from Café des Arts with an unusual and tasty flourless Lemon marmalade polenta cake, particularly attractive to those who are gluten-intolerant. The cake was very dense and rich, made with lots of butter, lemon zest, and lemon juice syrup, and our table felt that it paired equally well with the MCC.  Good range of food pairing opportunities. Price R69. 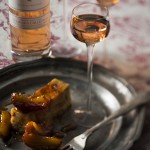 wine with 9% alcohol and 80g residual sugar, made from grapes from Robertson, rich in lime soil and a perfect region in which to grow muscadel.  The Sauternes-style wine has minerality, and was the easiest of the six wines to make, said Eugene. Chef Pieter had been tasked with the pairing for this wine, and he did a demonstration of his Apple, Cranberry, and Almond pudding, similar to a malva pudding he said.  He used the Muscat in the syrup which he poured over the pudding.  Price R69.

Harry Joubert, Leopard’s Leap Experience Manager, thanked the attendees, and said that the pairing decision between the food and their Culinaria wines was a personal choice, which would get a conversation going, as it did at our tables, and in the previous tastings too, not all participants agreeing with the pairings. As if the tasting of six dishes had not been enough, although the portions 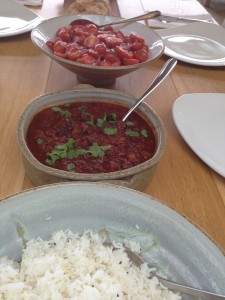 were tiny, we were invited to eat a hearty portion of more of Chef Chris Erasmus’ Lamb Tagine, Basmati rice and cherry tomato salad made from tomatoes harvested from the La Motte vegetable garden.  It was an opportunity to catch up with Hein and his recent overseas trip, which included spending time in Russia, a market with ‘enormous potential‘, he said.  They developed an agency via a retail group with 300 outlets three years ago.  Our country’s BRICS membership is a huge bonus, in terms of wine sales to China and Russia specifically, trade hurdles having been eased due to the country co-operative. Sales in India are lower, due to their preference for very spicy food, which is better paired with beer, but they do have presence in top establishments, Hein said. Brazil is close to Chile and Argentina, and therefore that country does not hold great potential for South African wines.  On his recent trip to Russia the internationalisation of Moscow was evident, as was the wealth of Russians, relative to his last visit four years ago. Sales in Europe are ‘dead’, he said, due to the poor economy, Germany being the exception.  The USA market is also promising, but its three-tier distribution system adds mark-ups at each level, which does not give them much revenue. The market is also supplied with their own American brands.

In introducing the launch of Leopard’s Leap new Culinaria Collection, Hein said that it was a privilege to open Leopard’s Leap’s Tasting Room in Franschhoek almost two years ago, it being a second label brand originally created in discussion with Dr Anton Rupert in 1999, and aimed for the UK market initially. In 2005 the marketing focused on South Africa, 60% of sales being off-trade, and 40% on-trade.  The label design of the brand is being relooked, given that it is now 13 years old.  To redesign the brand, they needed a home for it first, and hence the Tasting Room was born, and with it a culinary store, cooking school, and Rotisserie lunch buffet.  The brand also supports the Cape Leopard Trust, and research into the conservation of this predator.  The share of UK sales has dropped to 5%, and the risk has been spread across 14 countries now, including China, in which country La Motte and Leopard’s Leap wine sales jointly represent 10% of South Africa’s wine exports to the fast growing wine-drinking Chinese nation. A joint venture company Perfect Wines of South Africa has led to the development of the L’Huguenot brand, 3 million bottles having been sold in China.  Hein emphasised that they do not enter the wines in shows, and therefore they do not develop wines that are big and bold.

Chef Pieter de Jager and his team prepare delightful and healthy lunches at The Rotisserie at Leopard’s Leap, it being one of my favourite lunch stops in Franschhoek now.  Chef Pieter loves his job, beaming and looking content, telling us that he looks forward to coming to work in the morning. He loves connecting with his patrons, and is never hidden away.  A lovely spread of different salads made mainly from the organically grown La Motte vegetables as well as oven baked vegetable dishes is offered on a plate-by-weight basis, with roast chicken, pork and often other meat cuts being offered on a fixed price basis.  They make a delicious range of tiny sweet treats too, and in winter one can enjoy soups too.

I met Joaquim Sá from Amorim Cork South Africa at the launch, and he shared his concern about sparkling wine sales falling since last year.  His company is one of about ten cork suppliers to our wine making industry, Amorim being based in Portugal, supplying about 40 % of our country’s requirement, and their competitors are located in France and Spain,   About 40% of local closures are cork, he said. Cork has become trendy in interior design and decor, and even in clothing design.

Given that food and wine pairings are an important consideration for home entertainers and cooks, the Leopard’s Leap Culinaria Collection is a welcome and most affordable wine range.

Disclosure:  We received an extremely generous presentation pack of the six wines in the Leopard’s Leap Culinaria Collection.  Some photographs supplied by Leopard’s Leap.