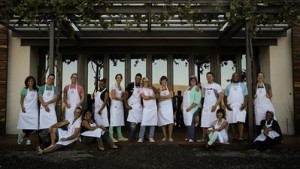 MasterChef SA Season 2 is the talk of the country, and we have another 7 weeks of viewing to look forward to. To warm things up a little, we have launched two competitions, the first being a prediction of who will win MasterChef SA in episode 26.

The restaurant was featured in episode 10, when Chef Chris Erasmus conducted a MasterClass, preparing a terrine.

Pierneef à La Motte opened almost three years ago, and has made the Eat Out Top 20 Restaurant shortlist two years running.  It pays homage to the master artist JH Pierneef, and 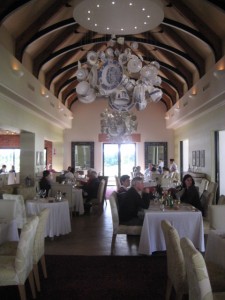 to the historical roots of South African cuisine, presented with a contemporary twist.  The restaurant is green in many respects, theming carried through into many different aspects of the restaurant.  The furniture outside almost looks custom-made, with a green woven-effect, giving it a nature-look.  The placemats are in the shape of a vine leaf.  The silver container has a green glass candle holder (as well as beautiful hand-blown glass bottles for the olive oil and balsamic vinegar, and little silver salt and pepper grinders).  The Pierneef name and theme comes from the priceless collection of 44 oils and other works by JH Pierneef (1886 – 1957), which La Motte bought from Pierneef’s daughter Marita, who now lives in the United Kingdom.  The work is displayed in the Pierneef art gallery on the La Motte property.  Given that Pierneef is synonymous with the pinnacle of South African art, La Motte honoured the artist by naming the restaurant after him, to demonstrate that they wish to follow his high standards.  The Pierneef name and art has also been carried over into a new range of La Motte wines, called the Pierneef Collection. Some of the collection of 1957 Pierneef lino cuts, which owner Hanneli Rupert had received from her father Dr Anton Rupert years ago, have been used for the back labels for these wines.

The restaurant is large, divided into the kitchen section, which opens onto the outside seating deck, allowing one to see Chef Chris and his team hard at work in the super shiny stainless steel kitchen.   Pierneef’s work has been printed onto the lampshades hanging over the kitchen counter.  The interior restaurant section is separated from the kitchen, and is dominated by three chandeliers from which dangle crockery from the Dutch East India Company, which had brought Jan van Riebeek to Cape Town.  The chandeliers are in blue and white, orange and white, and black, white and gold.  La Motte had bought the valuable crockery collection from a museum, and had the chandeliers custom-made for the restaurant.   Christo Barnard is the creative interior consultant who did the decor.

Speaking to Hein Koegelenberg, the CEO of La Motte, one is impressed with his warmth and passion for a project that brings pride in South African cuisine art, the return of the Pierneef collection to South Africa being the foundation of the restaurant, with the related buildings housing the Farm Shop, art galleries and museum, as well as the Tasting Centre, and creating what Hein calls a ‘tourism destination’.   The menu opens onto a welcome page: “Welcome to Pierneef Ã  La Motte Restaurant.  We have pleasure in hosting you and sharing with you our restaurant’s association with one of South Africa’s greatest masters.”  Homage is paid to both Pierneef, and to his daughter Marita, who has become a friend of the Koegelenbergs. ”Pierneef’s creativity in portraying the beauty of the South African landscape and architecture 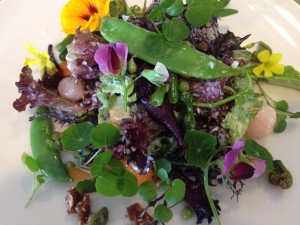 has served as a model for this restaurant’s creativity in offering cuisine inspired by centuries of variations on cooking – a unique presentation known as Cape Winelands Cuisine”.  After extensive research into the origin of South Africa’s cuisine, or “boerekos”, from Dutch, Flemish, German and Huguenot settlers about 350 years ago, and British settlers 150 years later, about 200 recipes were developed for use in the restaurant over time. The cuisine style really is meant to be “Boland Boerekos”, and the input from Professor Hetta Claassens, author of “History of South African Food”, was sought to select the recipes.  The menu is signed by Hein and Hanneli, reflecting their personal involvement.  Children are catered for as well.    Foraging is a strong focus, and therefore an extensive vegetable and herb garden has been developed on the farm, not only supplying Chef Chris’ kitchen, but top restaurants in the area too.

Post your prediction of which one of the 13 Finalists will be chopped out of MasterChef SA on Wednesday in episode 12 as a Comment to this blogpost. Closing time for entries is Tuesday 16 July at 19h30, at the start of episode 11.  The winner will be contacted immediately after episode 12 ends. There will be a weekly Restaurant Voucher prize draw per episode for the correct prediction of who will be chopped out of MasterChef SA in a specific episode. If there is no correct prediction, the prize rolls over to the following week. Only one entry per person is allowed per week.  The predictions will only be revealed shortly before episode 12, but only those received just prior to the start of episode 11 are eligible.

POSTSCRIPT 17/7: There was no correct answer to our competition this week, so the prize will roll over to next week, for episode 14 next Wednesday 24 July.

5 replies on “MasterChef SA Season 2 episode 12: Predict who will be chopped and win with Pierneef à La Motte!”