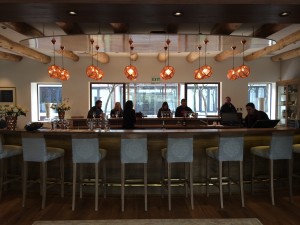 I have visited almost every winery in Franschhoek, but never Rupert & Rothschild, its tastings having been by appointment only in the past ten years since we have operated Whale Cottage Franschhoek.  It was a set of Facebook photographs of Hein Koegelenberg, brother-in-law of co-owner Johann Rupert, that attracted attention to the new Tasting Room, which opened on 1 July.

The farm Fredericksburg was owned by a French Huguenot, and was established in 1690, and taken over by the late Dr Anton Rupert and the late Baron Edmond Rothschild in 1997 when they established their partnership.  The owners shared a commitment to preservation and conservation.  Grapes are harvested by hand, and the berries are hand-sorted after destemming, to generate the best quality juice.  Intervention during the wine-making process is kept to a minimum.

I popped in yesterday, and found a very elegant yet informal and friendly Tasting Room, with a beautiful setting overlooking the Simonsberg mountain and the vineyards of the wine farm.  From the R45 between Klapmuts and Simondium one cannot see any buildings on the wine estate, being set back far from the road.  The Tasting Room door is locked from inside, so one of the staff must go to the door to press a button to unlock it, which is not clear when one arrives, and appears unfriendly if the staff do not get to the glass door quickly enough.  One enters close to the Tasting Desk, seating about 20 tasters on both sides of the deskFurther tasting tables are in a second section of the building, where tasting tables have been set up with sets of tasting glasses, and a sheet of information listing the Franschhoek wines of Rupert & Rothschild, and the international wines of the Rothschilds, some made at its own Chateaux in France, and in collaboration in New Zealand and Argentina.  Currently one can only taste the three Rupert & Rothschild wines, at R10 each, but the fee is waived if one buys six bottles or more.  In summer they will open the Rothschild wines for tasting too. 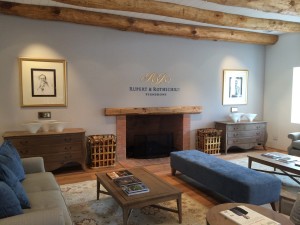 To the side of the Tasting Desk is a friendly-looking lounge, dominated by blue walls and upholstery with a large fireplace, which surprisingly was not lit, despite the extreme cold yesterday.  The lounge looks like that of a home, with two baskets for firewood on either side of the fireplace, and pieces of pottery by Anton Bosch, smaller and larger, spread around the lounge.  Very discreet, yet powerful in what they represent, are a drawing each of the late Dr Anton Rupert on the left, and the late Baron Edmond Rothschild on the right, a tribute to the fathers of Johann Rupert and Benjamin Rothschild, respectively.   The gold R & R logo, which is on the entrance gate to the R45, is 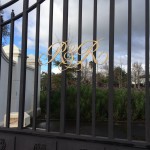 brought into the Tasting Room, above the fireplace, the only and very low-key branding inside the Tasting Room.    The Tasting Desk bar chair upholstery is light coloured with a green touch in the fabric. I found the bar chairs just a little too high to get on to them comfortably.  The furniture was made by Pierre Cronje, and the decor design was done by Christo Barnard, who also did the decor of Pierneef à La Motte, Camphors at Vergelegen, and of Leopard’s Leap.   The copper vase with roses matches the colouring of what looked like copper mesh lamps over the Tasting Desk. Two display cupboards with glass doors contain the products for sale in the Tasting Room: the wines by Rupert & Rothschild, as well as the Rothschild wines are in one cupboard.  The estate’s honey, extra virgin olive oil, olives, as well as ground coffee are in the other display unit, 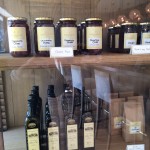 with a book ‘Masters of their Craft, the dedication and passion of Benjamin and Ariane Rothschild‘.

Marais Koch was very helpful in answering my questions, telling me that they operated from Anthonij Rupert Wines for the past year, while the renovations were being done to create the Tasting Room at Rupert & Rothschild.  Marais said that they have quietly opened, using word of mouth to spread the word about their new Tasting Room.  They have just joined Social Media for the first time.  He handed me an impressive classy pouch of information, consisting of  a brochure, tasting notes for each wine, and a list of their 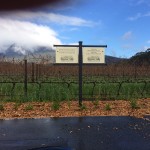 worldwide agents, all in cream.  The same design feel comes through in the signage on the farm, which guides one to the Tasting Room.  It does not guide one in how to drive in one very narrow section, only wide enough for one car, and no space at the side of the road to move to when a car drives from the opposite direction, which is what happened to me. Marais told me that they plan to offer food from summer onwards, with food and wine pairings, as well as antipasti dishes, tapas, and olives. They are looking to appoint a chef.  Marais very kindly waived the fee for tasting the Rupert & Rothschild Baron Edmond. 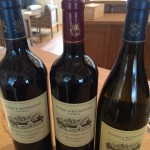 and is a barrel-fermented Chardonnay, the 2011 vintage costing R177; the Baron Edmond is named after his late father, and is a blend of Merlot, Cabernet Sauvignon, and Cabernet Franc, the 2011 vintage costing R328; and Classique, a Bordeaux Blend of Cabernet Sauvignon and Merlot, costing R129. Champagne Barons de Rothschild champagnes Brut (R470), Blanc de Blancs (R650), and Rosé (R650) are sold from the Tasting Room, and are a collaboration between three Rothschild cousins.   Wines from three Rothschild Chateaux are also available, all blends of Merlot and Cabernet Sauvignon, costs ranging from R155 – R240, while a Merlot costs R290. Three wines made in collaboration with an Argentinian producer, two of them Malbecs, and a third  Malbec, Syrah, and Cabernet Franc blend, sell for R90 – R275,  Rimapere is a Sauvignon Blanc made in collaboration with a New Zealand producer, costing R145.  Rupert & Rothschild extra virgin olive oil costs R79,80.

While it was cosy in the Tasting Room, even if there was no fire, it should be magnificent in summer, when the glass stacking doors open up completely to the beautiful views of the vineyards and mountains as a backdrop.  Rupert & Rothschild Vignerons is a wine estate well worth visiting.  Marais advised that one should call ahead to check that they have space in the Tasting Room, as they will close their gates to more visitors if it gets too full inside.