Ryan’s Kitchen has re-opened in Franschhoek, in a space double its former size, in Place Vendôme at the entrance to the village.  The restaurant now focuses on ‘small plates’,  even though ‘small’ is a relative term!  Chef Ryan Smith has simplified his dishes, reducing the number of ingredients, and added more spice to those on his new menu, each dish introducing itself through its fragrance before one tastes it.

For the past four years the restaurant operated from what was the breakfast room of Rusthof Guest House higher up the main road, a tiny space that could serve no more than 30 guests at a stretch, and up to 400 plates in an evening. A major blow to the restaurant in July was the sale of the guest house to Mr Analjit Singh, and construction work commenced soon thereafter.  Whilst the restaurant lease had another year to go, and Chef Ryan was 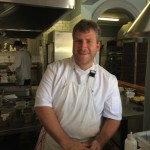 sad to leave the restaurant’s first home, the agreement he reached with Mr Singh was a blessing, in that it allowed him to close until the end of November, find the new venue (previously the awful Pistachio Bistro), do the necessary construction work in the record time of 6- 7 weeks, and to buy additional kitchen equipment for his larger sized restaurant.  The time-off allowed him to refocus his menu, and the locals have followed him to the new venue, having a ‘cult following’ I was told.

With the help of the owners of Ebony, the decor design became a classy blue-grey, with paintings of butterflies by Domi Postera supplied by Holden Manz, and for sale. New additional tables and chairs added can now seat 55 – 60 patrons.  Upholstered chairs were 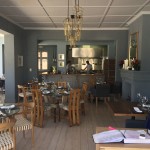 updated, creating a classy chic space.  The kitchen is open-plan, allowing one to observe Chef Ryan and his team preparing the dishes, but one is not as close as one was in the former venue.  It is hard for Chef Ryan to hear the questions of patrons sitting closest to the kitchen, due to the noise which the extractor fan makes in the kitchen.  Chef Ryan came out regularly, seeking feedback dish by dish personally. The restaurant has taken over the bubbly bar Fizz Affair, and also has a lounge section, also in hues of blue.  The entrance has been moved out of the parking area, to the centre of the 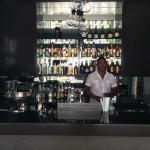 centre, which has beautiful standard roses, and allows one to sit outside as well, under Graham Beck branded umbrellas!   The wooden table tops and new glass top tables do not have table cloths, but material serviettes are offered and cutlery is by Forum.  A big fireplace will 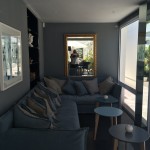 add a sparkle and crackle  in winter.  White blinds close off the glare from outside.

Plates and bowls have been made by ceramicists Diana Ferreira, Mervyn Gers, and David Walters. Chef Ryan came to explain his menu, saying that the focus on ‘small plates’ means smaller portions, allowing one to try four to five dishes for a full meal.

The menu is based on a Tasting menu, but offered in an a la carte format. It allows Chef Ryan to add more garnish to the protein dishes. The menu is attractive, unlike what one sees in restaurants, divided into sections.  The menu reflects Chef Ryan’s love for spices, depicting star anise, cinnamon, cumin seeds, and other spices. The same menu is offered for lunch and dinner, and is changed fortnightly.  Whilst waiting for the first dish to arrive, a wooden box of warm breads was brought to the table, consisting of a tomato roll, a sesame seed roll, and mosbolletjies, reflecting the restaurant’s positioning on its signage outside of ‘Contemporary South African cooking’.  The butter came separately, on its own wooden platform.

In the ‘Salad & Vegetables‘ section I chose a salad of asparagus with Kadhai marsala, grapefruit segments, and lemon juice (R70), an unusual combination, the marsala adding a touch of spice but not over-dominating the dish.  Chef Ryan said that he mixes the marsala mix himself.  The grapefruit cools down the spicy bite of the marsala.  He told me that he reads more Indian and Malay cook books now, inspiring his new menu.  He is staying away from French cooking now. 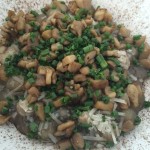 Chef Ryan wanted me to try the unusual and proudly South African tapioca porcini (R75).  It took some getting used to the tapioca texture, but the delicious taste of the porcini, chopped parsley, and Parmesan soon overrides it.  Chef Ryan explained that sago pudding has a boarding school memory for him.  The pepper added gives the dish a bite.  A grilled goat’s cheese, apple and fennel salad with granite (R75), and mielie ‘Momo’s’ with green chili, and pepper creamed corn (R65) is also offered in this section.

The pork belly was beautifully presented, ground cashew nuts having been mixed with tumeric and other spices, adding interesting colour and taste to the dish.  It was served with a (bland for me) sweet potato creme caramel 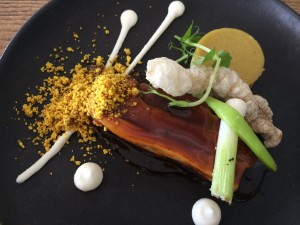 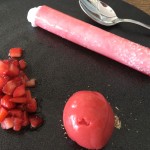 The dessert was a colourful sugar strawberry canneloni, with marinaded strawberries, and strawberry sorbet (R75).  Other options are chocolate and tarragon mousse (R75), granadilla and bubbly sabayon (R70), and a South African cheese selection at R105.

A Chef’s Choice five course tasting menu, to be ordered by the whole table, costs R590 with wine and R400 without.  The winelist is dominated by Franschhoek wines.

I was invited to try the new Ryan’s Kitchen via Manley Communications, Chef Ryan reminding me that they had met when he was still Executive Chef at Mont Rochelle, and they did the PR for the hotel. Everything at Ryan’s Kitchen was perfect, with one small irritation, in that the knife was placed by the waitress on the right, from my left, despite there being enough space on the right. Chef Ryan was surprised when I mentioned to him that his menu was a perfect Banting one, without carbohydrates.  Chef Ryan is ably assisted by his wife Lana, who handles front-of-house, whom he met in Russia when he worked at the Royal Astoria in St Petersburg.

I was impressed with the vast improvement in the new improved Ryan’s Kitchen, and it felt as if Chef Ryan himself has mellowed, 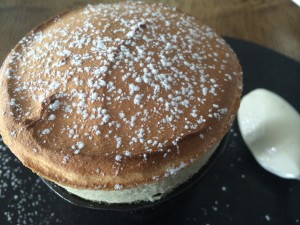 proudly enjoying his new spicy space!   The dishes have fewer elements, and have been upped in spiciness.

POSTSCRIPT 10/1:   Ryan’s Kitchen is renowned for its soufflé.  The restaurant has just added it to its its dessert list.  I subsequently tried the granadilla soufflé, presented in a beautiful bowl made by ceramicist Mervyn Gers, and served with a spoonful of litchi ice cream. It was superb.

NOTE:  This blogpost is reposted, as its original was lost when our website crashed earlier this week.