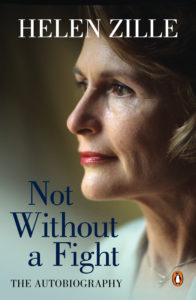 Thursday Club organizer and PR Consultant Sandy Bailey invited me to attend the launch of Western Cape Premier Helen Zille’s autobiography ‘Not without a fight‘, at a sold-out lunch at Buitenverwachting in Constantia last week. The highlight was being seated next to Ms Zille.

I first connected with Ms Zille telephonically when she investigated the civil service march and closing of the school by the staff of the Camps Bay Preparatory School which my son attended, when she was the Western Cape Minister of Education. I and a number of parents had organised a schedule of activities for the school learners for the day, to keep the school open and running, but the head of the school rejected our offer. The story was on the front page of the Cape Times the following day, and Ms Zille called me first thing in the morning to obtain further details, and took action. Seventeen years later she asked me at the lunch how my son is doing!

Ms Zille is Social Media savvy, and when I asked her if I could take 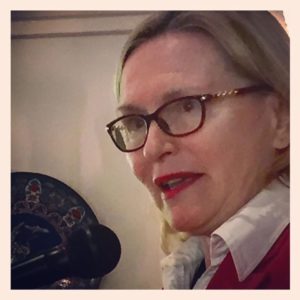 a photograph of her, she insisted on a Selfie, which she took! She asked me if I knew columnist and author Eusebius McKaiser, and muttered something about him, clearly having had encounters with him on Twitter. I discovered that she is a Pisces. She is to become a grandmother in April, and she plans her own second baby, a follow-up book which will focus on building a 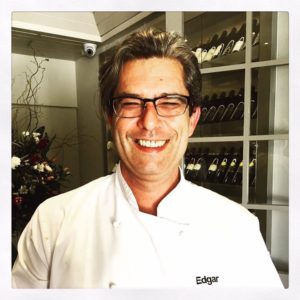 capable state. Her first book focuses on her personal and political life, she told me before her talk. 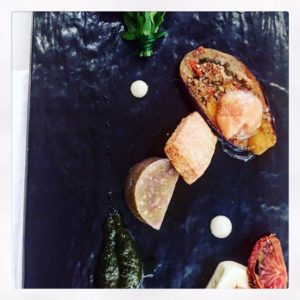 baby tomato in olive jelly, and pine kernel Parmesan short bread was already on the table, with a selection of breads and butter. The lunch was prepared by Chef Edgar Osojnik and his team at the 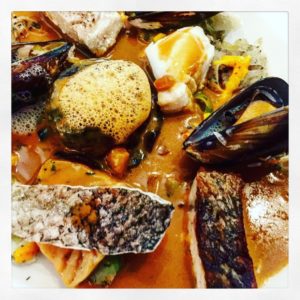 The main course was a beautiful lemongrass-scented bisque with seafood, with fennel, citrus, cucumber, and saffron aioli. As I am allergic to mussels, Sandy suggested that I have the 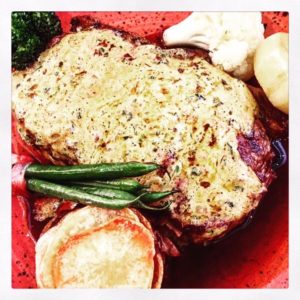 Banting option of Entrecôte Cafë de Paris instead, served with kohlrabi, broccoli, and a potato and mushroom stack, which I happily accepted, despite the heavy salt hand. Ms Zille allowed me to photograph her plate of bisque.

Ms Zille said that she took eight months to write the book, her deadline from the publishers shrinking as she handed in drafts. She enjoyed writing, but said that the first chapter was the hardest to write, in setting the scene with her family background. She talked without notes, just holding her book, and gave us a short overview of each of the chapters in the book. It was her fifth book launch, and she has done a number of media interviews too.

Sandy introduced Ms Zille as the Best Mayor in the World, and the Best Premier in the World, adding her own accolade of Best President-to-be in the world, which Ms Zille denied would ever happen. The respect for Ms Zille was palpable from the applause she received during her introduction.

Ms Zille spoke about her planned second book, but said that as a politician she has learnt to never make a promise. In the second book she plans to look back on the 15 years of her political life, and write about translating a political philosophy into practice.

She told us that the book title ‘Not without a fight‘ fits her personality, adding that nothing that is worthwhile in one’s private or business life comes without a fight or effort.  She described staying on top in politics is like holding on to a ‘greasy pole‘. She added that life is based on coincidences. She prefers to be alive to possibilities, and shared that it was sheer coincidence that she met her husband. Her life might have turned out differently, and she could have been living in the USA. She encouraged her children to be flexible and not rigid. One should persevere if one has a goal, but it is a challenge to get the balance right.

She wrote her book in chronological order, and warned that it is a real world story, and not a novel. She likes autobiographies, in learning from other’s tragedies and triumphs. The first chapter took longer to write than any of the others, as she tracked down her family members, with the help of relatives in the USA, many having been lost in the Holocaust. She was surprised that her parents never shared with her the extent to which this effected her family. She has more Spanish than English-speaking cousins, she discovered through her research. She writes that in growing up there were family traumas, and that she was very rebellious, and hence was sent to Boarding School, having exceeded her mother’s ‘capacity to manage‘. She went to St Mary’s in Johannesburg, I discovered through two other former St Mary’s learners who sat at our table, Cheri Scholtz and Brenda Wilkinson.

The book covers her early adulthood, becoming a journalist, and her love life. She tells her husband’s life story. Through a school project one of her sons had to prepare about a family member, they realized that they had never shared their backgrounds with their children, having been guilty of what her parents had not shared with her. She did not write much about her two sons, feeling that they should write their own stories. Ms Zille found a number of family memoirs in her search for information about her family, describing it as a ‘fascinating journey of discovery‘.

Ms Zille’s first step into political life was in being elected to the Grove Primary School governing body, leading to her election as its chairman. She helped formulate the South African Schools Act, a Bill which was passed. Changes to the Act were called for by the government, so Ms Zille challenged this in court, with the support of 80 other schools. She was approached by then DP leader Tony Leon to write the DP Education Policy, and thereafter to stand for the DP, becoming the Western Cape Minister of Education. She held the position for two years, and shares the ‘war‘ which took place within the party at that time, which was tougher than dealing with the opposition. She set up DA branches in Xhosa-speaking areas, finding it tough to find locals who were prepared to stand for the party.

Becoming Mayor of Cape Town followed, with succession planning within the DA. Patricia de Lille was brought in, succeeding Ms Zille as Mayor of Cape Town, while she became Premier of the Western Cape. She brought in Mamphela Ramphele and Lindiwe Mazibuko at the top, but both these choices did not work. She announced her withdrawal as head of the DA last year, and she will step down as Premier in 2018.

In question time Ms Zille was thanked for fighting for us. She said at many times she felt closer to the ANC than to her own party. She was asked about Pravin Gordhan, and she expressed her regard for him. Being accused of fraud and spying is something she experienced herself when she was arrested. She said that she is not optimistic about the new Public Protector, but will ‘give her a chance‘. Early in her career and family life she tried to be a ‘Superwoman‘, rising early, but realized that a ‘Superwoman‘ does not exist. She expressed regret that she was not at the sport matches in which her children played. She praised her supportive husband and ‘domestic help‘. She made the best of the short time which she had with her family. When asked what advice she would give the DA leader Mmusi Maimane, she said that she keeps away from his advisors. However, her advice would be to work on a strategic plan to gain new voters, in keeping ‘his eyes on the next horizon‘; they should defend the rule of law; and they should articulate the party’s vision, especially in respect of non-racism. She said that the future of our country’s politics is ‘blue’ (DA) versus ‘red’ (EFF), and not the ANC, which only sees white and black, and which will crumble! 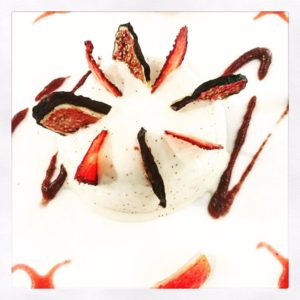 The DA holds four of five of the major metros, being the engines of our economy. But the EFF holds the balance of power.

Dessert was a rich baked cream cheese pancake, but because I had been flagged as a Banting guest, I was served a refreshing panna 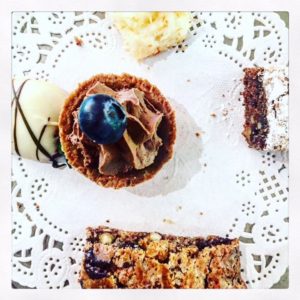 cotta with dried shards of fig and slices of strawberry.  We were offered a good strong coffee, and friandise.

Ms Zille was gracious in signing books, which were sold at the launch. Organised as she is, she asked book buyers to write the message they wanted her to write in their book. In my book she spontaneously wrote ‘It’s a whale of a tale!‘. It was a fascinating afternoon, and the energy and dynamism of Premier Helen Zille was felt by all.