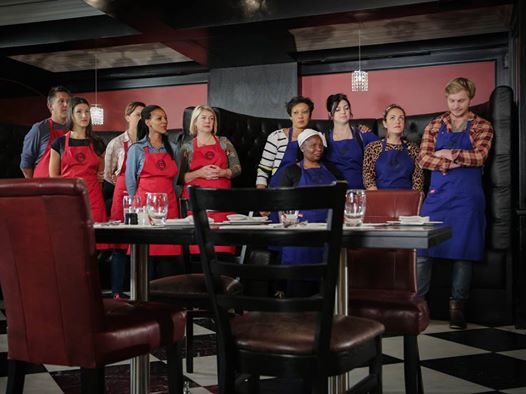 Last night’s episode 7 of MasterChef SA was a Team Challenge, the ten remaining contestants divided into two groups of five, the Red team led by Philippa Robinson and the Blue Team by Penny Fitchet.  It was the most boring episode ever in the three seasons of MasterChef SA.

The ten contestants were flown to Durban (very wasteful, as the Team Challenge could just as easily have been done at Tsogo Sun hotels in Cape Town).  The contestant teams were seen walking along the Golden Mile, with many tourist hotels.  They arrived at the Southern Sun Elangeni & Maharani Hotel, having to cook in their The Grill Jichana restaurant kitchen. The hotel serves the largest number of guests of all hotels in the country, Chef Benny Masekwameng told the contestants.  The judges of their meal were invited guests, being the most long-standing waiters at the hotel, as well as at some other restaurants, their collective experience exceeding 400 years, with a consultant who does staff training. Some of the waiter guests had served Queen Elizabeth and other members of the Royal Family. Each team had to choose the best person to prepare the meat, fish, the chips, onion rings and sides, to manage the pass, to play waitress, and to prepare the sauces at the table, using a Flambé and Gueridon trolley, with a gas hob, chopping board, and cutlery drawer. 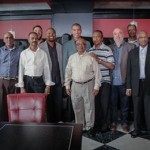 Blue Team consisted of Roxi Wardman, Refilwe Tselanyane, Francois Zietsman, and Sipho Mdlankomo, while Philippa’s Red Team was Ian Young, Claire Allen, Mel Sutherland, and Abigail Mbalo.  Penny was praised for being a teacher, standing her in good stead to lead her team. Chef Pete Goffe-Wood explained the use of the trolley, likening it to a ‘theatrical production‘: ‘Gueridon Service is a celebration of the theatre of food. You’re right at the table making food in front of your guests. It’s going to test you to your limits today’.

For close to an hour we watched the two teams serving the guests a choice of fillet steak or tuna, with sides, which was presented in a menu which the two waitresses offered the guests.  Each team had to cook for each of the guests, in groups, so that their food quality and service could be evaluated.  Sipho was the star of the Blue Team, being the sauce maker at the table, using the Gueridon trolley, a little nervous at first, but gaining in confidence as she made more.  She used Klipdrift brandy in her pepper sauce.  Philippa showed her nervousness, not having cooked on a Guerdion trolley before, and her waiter guests were kind in guiding her in how to make the sauces on the trolley, ‘so basically I had a MasterClass in the challenge‘, she said.  Claire came across with confidence in taking the orders for the Red Team, whereas Refilwe was less successful in this role for the Blue Team.

The Blue Team had undercooked one steak, and Francois berated himself for the error.  He said that he judges the readiness of steak by feeling it. However, the team had a star in Sipho, charmingly explaining to the table how she was making her sauces, winning many brownie points.  She was praised for tasting her sauce before serving it.  Each of the judging guests provided feedback while they ate and when they judged, and often one 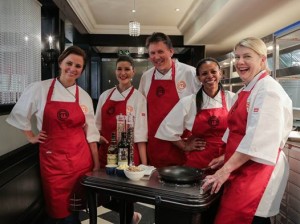 could not hear what they said, necessitating subtitles. Underseasoning of the dishes was a complaint of some of the guests.  Each of the guests had to use a steak knife to vote for the team which prepared the best dish, and it was the Red Team which won by a small margin.  The Red Team won the prize of relaxing at a ‘vegetarian farm’ (what a weird description) in the Natal Midlands, while the five Blue Team members will go into an Elimination Challenge in episode 8, one of the Team having to go home.  Chef Pete praised the good teamwork in the teams.

The hour-long episode showed endless footage of the kitchen action. It demonstrated the importance of timing and temperature, the different elements having to be completed at the same time, and all dishes having to go to the table simultaneously.  The boring drawn-out episode was criticised on Twitter too!