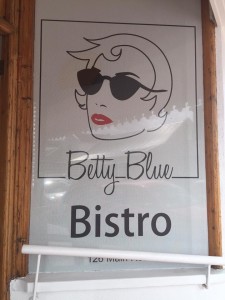 Betty Blue Bistro had been on the top of my Hermanus restaurant list, and I arranged to meet my UK friend Lisa Harlow there for lunch, seven months after my last visit to the famous whale-watching town. There is little blue (only on the exterior of the building), a fresh buttercup yellow dominating the decor!

The Betty Blue Bistro space is large, an amalgamation between 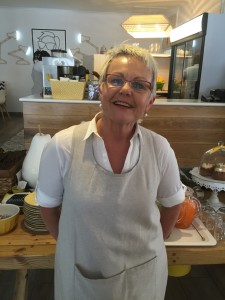 three shops previously, including a video shop, and a coffee shop called Rosenkavalier. Celia and her husband Rayno Rabie were the long-standing owners of  Savanna and Burgundy, and sold both restaurants. Celia told me that she got a ‘koskoors‘, missing restauranting, and 14 months after selling Burgundy they decided to open Betty Blue Bistro eight months ago. For Celia it was vital that they were not a copy of another restaurant, but rather that they had to reinvent themselves.  Rayno found the name of the restaurant in a movie title from 1986, and they liked it for being ‘funky, different, and original’!  Celia laughed when she told me that Betty is the boss, and any problems must be blamed on her!

Celia is a true hospitality star. We had seen each other in their previous restaurants, but had rarely spoken, and became recent Facebook friends when her daughter Inemari Grobler received attention for her role in styling the dishes which Jan-Hendrik van 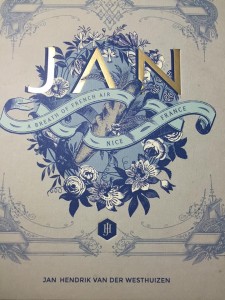 der Westhuizen shot for his second book ‘JAN: A Breath of French Air’. Celia’s son-in-law Kevin Grobler is the Head Chef at JAN Restaurant in Nice, which has just been awarded its first Michelin star, the first South African-owned restaurant achieving this amazing accolade.

I had not booked for lunch, and have rarely interacted with Celia at her previous restaurants, yet she greeted me as if I was a long-standing friend, and knew about my love for a dry cappuccino, demonstrating her professionalism by asking if I would like one. It was served with an additional cup of foam. How impressive!

I had arrived at the restaurant early, and Celia took time out and 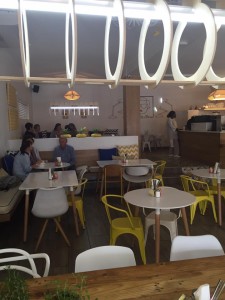 sat at our table, to tell me more about the restaurant and how proud she is of Chef Kevin and Inemari. She herself cannot wait to eat at JAN restaurant. Inemari previously was a lecturer at the Institute of Culinary Arts, and helped to do the styling for the book ‘Brekfis’, which is a joint collaboration between the ICA, ICA owner Laetitia Prinsloo, and the radio station RSG. Inemari does the Social Media for JAN restaurant as well as for Betty Blue Bistro, from a distance.

Celia told me that their staff complement has reduced from the 60 they employed at Burgundy to 20, to serve in the 80-seater restaurant. She decided to not offer dinner, giving herself some personal time, compared to Burgundy, because they worked almost 24/7 then. Wanting to do something different, Celia and Rayno considered Stellenbosch and Cape Town as a new restaurant destination, but realized that they are so connected to Hermanus that they cannot leave the town, being a part of the local families living here. Their change was so radical that they also sold their house, not having had much time for the responsibilities that house ownership brings, so now they rent an apartment above a shop in close walking distance from their Bistro. I commented on the beige aprons with a closure at the back and pockets in the front, a design which Celia had seen on Pinterest, and which she made for herself and her staff.

The floor has a Moroccan touch with a central row of tiles within the oak wood flooring. Tables have white tops, with yellow chairs, and the buttercup yellow touches can be seen throughout the restaurant, a shelving unit near us having a  collection of yellow items, including a yellow tin of olive oil. The tables have Eetrite Slimline cutlery, sugar in a glass jar with a yellow top, and paper serviettes. Yellow pots hold cacti. 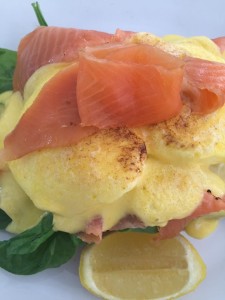 The menu has become more Banting-orientated, due to a demand for gluten-free items, and they serve Breakfast all day. They serve ‘pasta’ made from courgettes. The menu has a leather cover, looking like cork.  I ordered Eggs Benedict with salmon on rye bread (R90), while Lisa enjoyed her pulled pork pancake (R95). 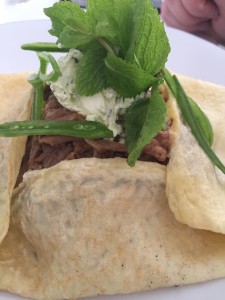 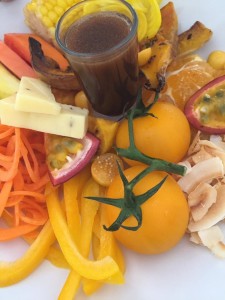 or chicken to the salads at an extra charge.

Celia was amazing, bringing dishes to the table which had been ordered by other guests, to allow me to photograph them.

For desserts one can order Banting cheesecake, Pecan nut tart, and carrot cake (with the most beautiful presentation), each costing R35. Pancakes are big, served savory as well as sweet, and I wanted mine served old-fashioned, with sugar, cinnamon, and a slice of lemon (R40). Pancakes can also be ordered with lemon meringue, peppermint 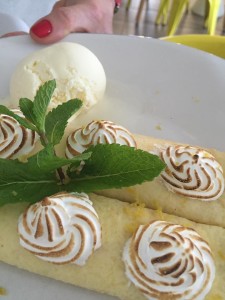 crisp, caramelised apple crumble, and with milk tart. They are served with 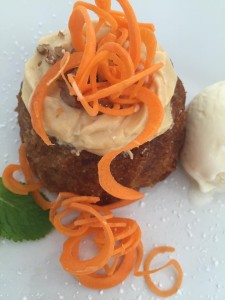 ice cream or cream. Chocolate pancakes are available too, served with Nutella (R55), or a peanut butter mousse with banana and ice cream (R60).

The wine selection is small, supplied by Creation Wines: their Sauvignon Blanc costs R140, and the Chardonnay R220.  The Whale Pod range by Creation costs R35 a glass for Sauvignon Blanc, Rosé, and the Syrah Merlot blend. Rainbow juices are available too, in red as Beetiful, green as Popeye, yellow as Morning Sunrise, and a Betty’s Choice of the Day, costing R38.

Lisa and I were unanimous in judging Betty Blue Bistro as having the most innovative menu, most creative plating, best fresh food we had eaten, and best service we had ever experienced in Hermanus by far!

2 replies on “Restaurant Review: Betty Blue Bistro is not blue at all, best in Hermanus!”