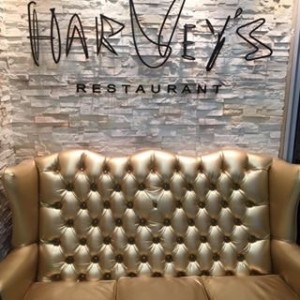 In my quest for finding the near-perfect restaurant in KwaZulu-Natal, Harvey’s Restaurant close to the Oyster Box in Umhlanga was recommended.  It was a massive disappointment in all respects, with an absent owner Chef Andrew Draper, and very expensive.

On Monday evening I was dropped off at the restaurant by the hotel’s limo service, not having made a reservation. The driver went in with me to check if there would be space, and it was no problem, only four tables in total being occupied in the time that I dined there. Unfortunately the table behind me had a young child, disqualifying the restaurant as fine-dining. The music was brash and bold, and terribly loud!

The exterior looked promising, with a gold couch under the restaurant signage, but all that is gold does not glitter, as I was to find out! A hostess showed me around, and pointed out that they host a lot of anniversary and birthday dinners, so that they have a space with a high-back chair and portraits and other family touches against a wall, so that group photographs can be taken there. Two walls are 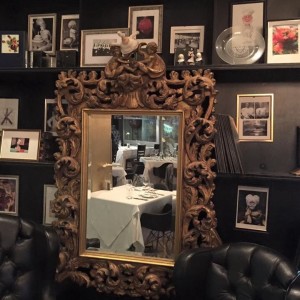 painted black, with shelving for books. The other two walls are glass sliding doors, allowing one to sit outside. A massive chandelier dominates the interior, but does not light up the restaurant interior fully, which meant that I went 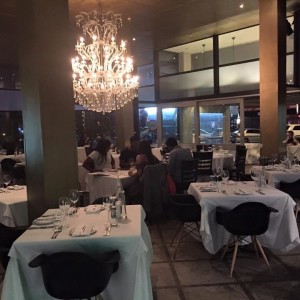 to the terrace to take the photographs there.

I was confused as to who my designated waiter was, as the hostess and two waiters interacted with my table, not making the service any better.  A mix of black plastic tub and wooden slatted chairs continue the color scheme, while white table cloths light up the interior. The floor is a cement slab with lines painted so that they look like tiles! The tables have material serviettes, Baguette cutlery, with a candle in a holder (lit after I sat down), and unbranded salt and pepper grinders. My table was wobbly, so I had to request that it be stabilized. The restaurant seats 80 inside and 40 outside. They have a catering kitchen close by, and cater for events and weddings elsewhere or in the restaurant.

I was told that Chef Andrew was not in the kitchen, and that he has two Head Chefs in the kitchen, being Dominique Brouchard (on duty on Monday evening) and Jonathan Snyman. It was explained to me that Chef Andrew is rarely in the restaurant, but that he will come through if there are any problems. A cynical chef from the area told me that the chefs in the kitchen are at student level, and it was reflected in the experience I had. Chef Andrew started the restaurant 21 years ago, and has moved it three times, from Durban and it has been located in Umhlanga for the past two years.

The menu came in a very large plastic folder, and the page format was such that I could not photograph it for my notes. I asked the hostess if she could print a copy, and she said that she would do so. She had to tell me that she could not reach her manager to be emailed the document. I suggested an alternative to her, and this worked. The prices on the menu are written in words.

The wine list was in a black plastic cover too, pages being in plastic sleeves, similar to what we experienced at 9th Avenue Bistro. It starts with a ‘Wine Ethos‘ page, and explains that they do not suggest wine pairings for their dishes. They list wines by the glass, with bottle prices added. White and red wines by the glass range from R30-R50. For each wine they denote the vintage and the region of origin. International wines are listed, but the list is limited to four Italian and one French wine, as Chef Andrew writes that he is proudly South African. They even have a section for wine magnums. What makes the wine list unusual is that the wine prices are written in words and not in numbers!

A bowl of badly sliced French baguette was brought to the table, 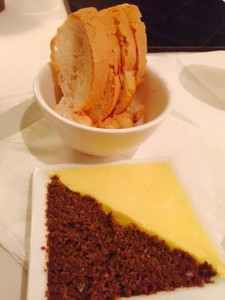 slightly warm on the edges and ice-cold on the inside, clearly fresh out of the freezer! Unusual was the butter and tapenade dish that accompanied it! The bread was dreadful, and the third waiter who brought it to the table could not explain to me what it was.

I ordered a starter of Peking Duck, a dish I had not seen on a non-Asian menu for a very long time. Its plating was not very attractive, with dark colors, and consisted of three mini 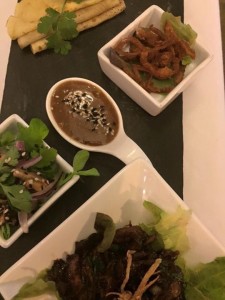 pancakes, cured shredded duck, very salty tiny pieces of crispy duck skin, hoisin and sesame sauce, and a shiitake salad with a missing vinaigrette, which was brought to the table when I pointed it out to the waiter (R88). Oysters cost R20 each, and other starters were priced between R80-R90 in the main. Options include a slate plate of Midlands cheeses, crab springrolls, chicken livers flamed in sherry, prawn and angel hair pasta, and West Coast mussels.

My main course order was pork belly, for which a waiter brought a heavy-duty Brünter steak knife, and stretched right over me from the left to put it down on my right, a pet hate! The pork belly was unbearably sweet, being caramel crusted, most of the crust luckily falling off the meat as soon as one cut it! It was plated on top of braised fennel and a parsnip 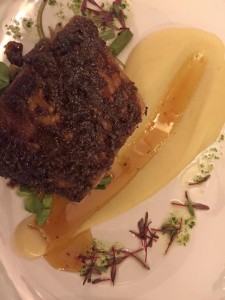 mash (R198).  The dish was accompanied by an over-sized bowl of ‘game potatoes‘, which the waiter explained was a potato type that better soaks up sauce on game dishes. I could not find any reference to a game potato on Google! Main courses were priced over the R200 mark for four out of the twelve dishes, for Norwegian salmon, lamb chops, duck, and lamb Bordelaise. Other dishes were just a few Rand under R200. Prawns and the Bouillabaisse are marked SQ.

The dishes arrived at the table quickly. The bill was presented in what looked like a book, but was hollow inside for the bill. In leaving the restaurant, I was invited to pop in at the green lit Harry’s Bar of the restaurant, at which Trace van der Merwe works as a mixologist, having come fifth in the WORLD CLASS cocktail competition for the South African leg. He told me that he likes to go back to basics in 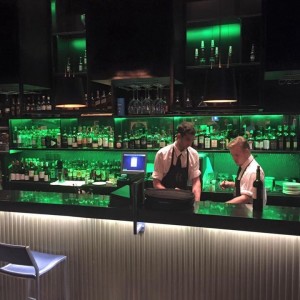 making cocktails, in using natural ingredients instead of infusing them. His competition cocktail is called ‘Dream on a cloud‘, and is made with Ron Zacapa rum, white chocolate dream crème made with Cadbury dream chocolate, Tia Maria, vanilla syrup, and gin.

It is with confidence that I can predict that Harvey’s will not make the Eat Out Top 20 Restaurant shortlist this year, almost everything being wrong at this restaurant, and therefore the prices charged are excessive! Only on writing the review did I see a footnote on the menu which demands a minimum spend of R120 per person for dinner!