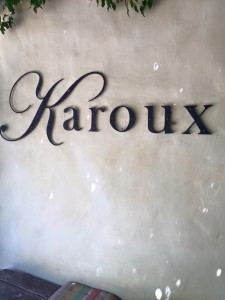 Driving back from Plettenberg Bay last month, I stayed over in McGregor, and was introduced to Karoux, the Eat Out Best Bistro 2015 in the Western Cape, by locals Michael MacKenzie and Freddie Symonds.

It was hard to see the signage for the restaurant, being on top of the building in a collection of others, so it is important to have the street number when looking for it. One steps through an entrance way into a walkway past Dudley’s Larder, a Deli which belongs to the Karoux owners, and onto the stoep of Karoux, with a view onto a garden area with a fountain and croaking frogs.  The menu is handwritten on a blackboard.

Karoux writes on its website that ‘Food should be simple in creation and complex in consumption‘. It welcomes patrons to the restaurant ‘to spend time at their table‘, to experience their Karoo hospitality!

Michael and Freddie had already arrived at Karoux, and 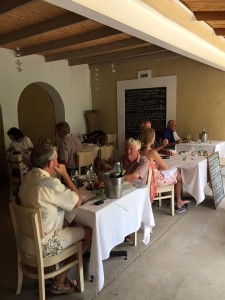 enjoyed some Arendsig wine from the Robertson valley, which they have grown to enjoy. The partners previously lived in Cape Town, and moved to the countryside when they fell in love with the village, buying one house, and then a second, turning one of them into the 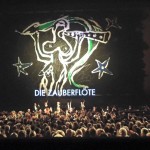 Wahnfried cultural centre for live concert performances and for art movies, a legacy they will leave to the village. On the Sunday afternoon of my visit Michael was screening Mozart’s ‘Zauberflöte’, in commemoration of Mozart’s 260th anniversary, so it was a double bonus in visiting the village, as was the invitation to stay over at Michael and Freddie’s home. Well-known UK Chef John Tovey, formerly of Miller Howe and now a McGregorian, also lunched at Karoux, and Michael told me that he was the first to offer De Wetshof wines in his UK restaurant. 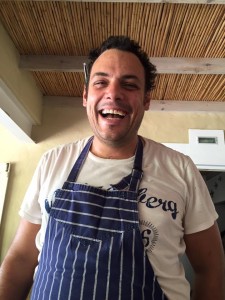 Karoux was bought from the previous owners three years ago, who had given the name to the restaurant. New owners Aimee and Ryan Josten run the restaurant by themselves, and decided to keep the name. The Deli is new, and named after their dog Dudley. Aimee was previously the Manager of Catharina’s at Steenberg while Ryan was the chef at Cellars Hohenhort. Chef Ryan studied at the Culinary Academy, and worked in Scotland, both at the Monachyle Mhor Hotel and 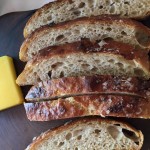 Aimee brought generous slices of sourdough bread with a crispy crust and farm butter to the table. The tables have tablecloths and material napkins, with white bowls of salt and pepper. 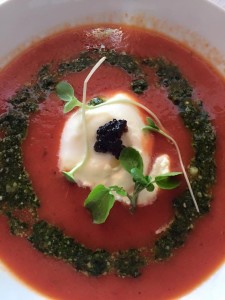 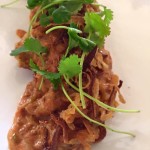 Michael and I both ordered pan-roasted duck breast with 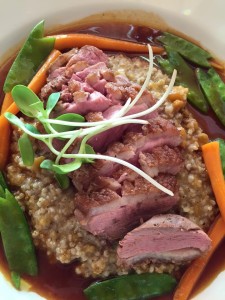 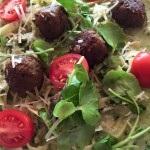 as well as aged grass-fed sirloin with triple cooked chips, garden salad, and a mushroom and brandy sauce (also a steal at R145).

Michael made his way off to the Wahnfried theatre, while I had the pear Tarte Tatin with vanilla ice cream (R55), before Freddie and I joined up with Michael at Wahnfried. Other dessert options are vanilla pod Crème Brûlée (R50), and white chocolate and caramel ravioli with dark chocolate 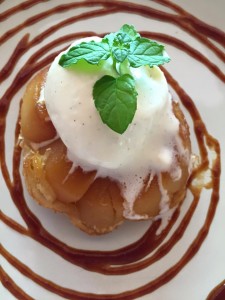 I experienced unexpected excellence at Karoux, and wished we had a restaurant of this stature (and good value) in Cape Town!

2 replies on “Restaurant Review: Unexpected excellence at Karoux in McGregor!”