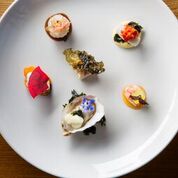 The January 2016 edition of Qantas’ Spirit of Australia in-flight magazine has named a dish by Tokara Chef Richard Carstens as one of the top 10 dishes in the world in 2015, rubbing shoulders with two dishes from Michelin-star restaurants! The photograph of the dish is the main photograph of the article, an honour, and even more so in that photographs of only three dishes out of the ten were featured!

Chef Neil Perry made the selection for the magazine. He owns the well-known Rockpool as well as Spice Temple in Sydney, Rockpool Bar and Grill in Sydney and in Melbourne, and Rosetta in Melbourne.  He co-ordinates Qantas Flight Catering via his Rockpool Consulting. He has appeared in numerous food programs on television, and has written six food books to date.

Top Australian Chef Neil Perry, who is a menu consultant to Qantas too, writes: ‘When I look back at 2015, I’m amazed by what a great year of traveling and eating it was. Here are my 10 favorite dishes, in no particular order. Some are from Michelin-starred restaurants and others from noodle joints, where a great meal can cost $10‘ (Australian). It is not clear how Chef Neil Perry came to visit our country, and at which restaurants he chose to eat.

The restaurants on Chef Neil Perry’s top 10 dish list for 2015 are as follows: 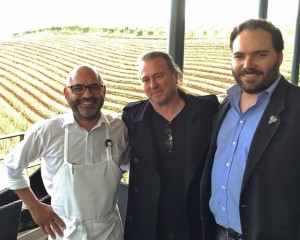 #.  ShanDong Mama Mini, Melbourne: Chef Neil’s dream dish is its pan-fried mackerel dumplings, which he describes as being crisp on the fried side and tender on the steamed side.

#.  Ester, Sydney: known for its bread, Chef Neil praised the ‘knockout’ dish of wood-fire-burnt leeks, sesame sauce, and breadcrumbs, which he describes as ‘texturally superb‘.

#.  Hing Kee, Hong Kong: despite the interior not offering any luxury, the seafood is described as ‘fresh as it gets‘. He praises the razor clams steamed in garlic in particular.

Dinner by Heston, Melbourne: The top dish is Chef Heston Blumenthal’s ‘meat fruit’ dish in terms of its taste, texture, and presentation, being a paté encased in mandarin jelly, making it look liked a freshly picked citrus fruit.

#.  Spice Temple, Sydney: the 1,5kg mud crabs steamed with ginger and shallot are a favorite of Perry. What is not disclosed in the article is that the restaurant is owned by Perry!

#.  NaruOne, Sydney: in this Korean barbecue restaurant Chef Neil enjoys spicy stir-fried pork with rice, carrot, cabbage, and onion. They are stir-fried with soybean and chili pastes, and served with kimchi.

#.  The Ledbury, London: out of a seventeen-course meal enjoyed at the two star Michelin restaurant the favorite was the flame-grilled mackerel with shiso, pickled cucumber, and Celtic cucumber prepared by its Chef Brett Graham.

#.  Sushi Saito, Tokyo: the three star Michelin restaurant’s top dish for Perry is his Cooked Prawns, which is peeled and deveined while still warm. It is described as ‘crunchy and sweet’.

One hopes that Eat Out will see this article, not (yet) having seen fit to award Tokara restaurant and its Chef Richard Top 10 Restaurant status in the past five years!