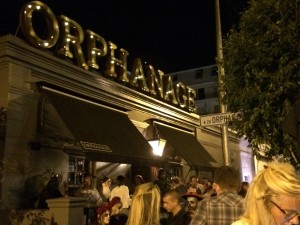 Since Orphanage Cocktail Emporium opened on fashionable foodie Bree Street in Cape Town almost three years ago, it has established itself as a classy establishment with award-winning bartenders and unusual bespoke cocktails. More recently it has added a restaurant on the lower level, accessible via the Bree Street entrance, or its own dedicated entrance on Orphan Street.  It has decided to give back to the industry by allowing ‘orphan chefs‘ to use their space for a year to set up a restaurant, which the chefs would not have been able to afford to do on their own, and to overcome the barriers to entry.

Chef Johann Breedt is the first ‘orphan chef’ to have been ‘adopted’ by Orphanage, 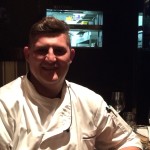 and took over the kitchen in December. He was a finalist in the first season of Kokkedoor.  I first met him when he was working at the Executive Club at The Westin Cape Town, where we were invited to a Graham Beck MCC tasting and lunch, and I remember the lunch as being excellent.  Chef Johann moved to Shimmy Beach Club, then joined Taj, before moving to Orphanage. He trained at Chef Raymond Blanc’s Le Manoir aux Quat’ Saisons and The Ritz Hotel in the UK.  He also previously worked at The Twelve Apostles Hotel & Spa and The Lanzerac. END_OF_DOCUMENT_TOKEN_TO_BE_REPLACED 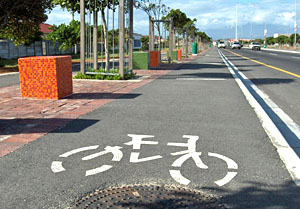 A R20 million project by the City of Cape Town will expand cycle and walking lanes in the Cape Town city centre to new lanes to be developed in suburbs outside the city centre, reports the Cape Times.

Cycle lanes will be developed in Athlone, Rondebosch, Mowbray, and Salt River, and will lead to the green cycling lanes already seen on city centre roads, such as Bree Street and Somerset Road.  In addition, walking paths and cycling lanes will be developed in Khayelitsha, Gugulethu, Nyanga, Philippi, Steenberg, Atlantis, Delft, Kuils River, and Bonteheuwel.  The linkage between the city centre lanes and the Liesbeek Parkway cycle route, as well as from Observatory and Woodstock, will commence next week.

The Pedal Power Association has welcomed the planned additional cycle routes, stating that the Argus END_OF_DOCUMENT_TOKEN_TO_BE_REPLACED

The World Cup has put Cape Town into a party spirit, especially on Thursday, when the Cape Town Fan Park outside the City Hall opened with R. Kelly, and on Friday evening, after Bafana Bafana and Mexico drew their match.   One could have sworn that Mandela had just been released from Victor Verster all over again!

Soccer fans are celebrating in various locations in Cape Town:

1.  The Cape Town FIFA Fan Fest at the Grand Parade Fan Park can hold 25 000 “jollers” (Afrikaans word for â€˜partygoers’), but it is estimated that 42 000 partied there on Friday.  Local bands will perform at the Fan Fest every day, from 11h00 – 23h00.  More than 100 artists will perform at the Cape Town Fan Fest on the Grand Parade, reports the Cape Argus.  According to the People’s Post, Goldfish performs today at 18h00; tomorrow BLK Sonshine and CODA perform from 18h00;  Loyiso is on stage on 16 June, Liquideep on 17 June, and The Rudimentals on 18 June.  Other performers include Robbie Jansen and Friends, Project, Kalahari Surfers, Brasse Vannie Kaap, Iqulah, Fezeka High School, Soul Makossa!, Ghorwane, Phuzekemisi, K’Naan (29 June), Karambola, FreshlyGround, Capsolys, Abekaya, Gang of Instrumentals, Danny K, The Rockets, Prime Circle, Flat Stanley, and Flash Republic.   Local South African foods such as Cape Malay chicken curry, lamb neck potjiekos, boerewors rolls and biltong are for sale, as are burgers, hot dogs, prego rolls, calamari, lasagne, soup, pizzas, and French fries.   One may not bring one’s own food into the Fan Park.

2.  Other Fan Fests are at the Bellville Velodrome, Vygieskraal Stadium in Athlone, the Swartklip Sports  Complex in Mitchell’s Plain, and the Oliver Thambo Community Hall in Khayelitsha.

3.  The Brazilian community has turned the Civic Centre on Main Road in Sea Point into a home for Brazilian soccer fans.  By day Casa Brazil will be an exhibition area for the country, and at night it will have a Rio carnival atmosphere.

4.  Cool Britannia, the United Kingdom’s largest events company, is hosting an on-going soccer celebration  at the Cape Town International Convention Centre for the duration of the World Cup.  Every day a different qualifying country will be showcased, from midday â€“ 3h00.   The opening act was Estelle (â€˜American Boy’), performing in South Africa for the first time.  Other performers that are expected are Fatboy Slim, 340ml, Tucan Tucan, Euphonik, HHP,  Black Coffee, Milkshake, Ricardo da Costa, La Vuvuzela, Liquideep, Flash Republic, Dean Fuel, and Roger Goode.  DJ Fresh and DJ Dino Moran will also be on show.  The Parlotones will end off the month-long party.   South African fashion design by Gavin Rajah will be featured at a fashion show on 15 June.  Ticket prices range from R 150 â€“ R 400 per person, and can be bought at Computicket.

5.  As a non-official “fan mile”, Long Street has plenty of vibe (and beer), and the most popular watering holes are The Dubliner, Joburg, Lola’s and Long Street Cafe, the World Cup volunteers tell me.

6.  The V&A Waterfront is also attracting soccer fans (100 000 visitors on Friday), due to its proximity to the Cape Town Stadium.  Ferrymans is popular, the Paulaner Brauhaus is entertaining the German fans to Cape Town, the Lookout Village marquee on top of the parking garage on the Granger Bay side, and the MTN Fan Zone near the Clock Tower is also attracting soccer fans.

POSTSCRIPT 21 June: Cool Britannia was reported on Kfm yesterday to have closed down at the Cape Town International Convention Centre, due to unsatisfactory support.