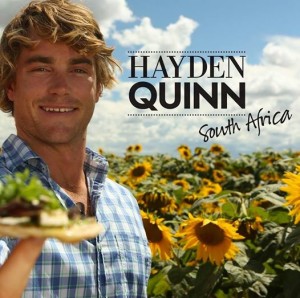 I started with the Cardova Group, the production company of ‘Hayden Quinn: South Africa‘, and of the ‘Expresso Morning Show’ and ‘Top Travel‘ too, all flighted on SABC3.  A random e-mail landed in my Inbox from LinkedIn, asking me to congratulate Mark Bland as newly appointed Producer of ‘Hayden Quinn: South Africa’, just as the series kicked off and my interest in it was piqued.   I got Mark’s cellphone number via LinkedIn, and asked him for more information about the food series.  He was extremely hesitant in talking to me, even though we have known each other for  a good two to three years.  He is a regular reader of my blog, and has commented on it on occasion.  I was taken aback about his hesitancy to meet, to talk about the new show, stating that he had just been promoted, and did not want to jeopardise his new appointment in case I wrote something that could land him in trouble. As a regular reader he would have known that I can only write what I have been told.  As the producer of the show, one would have thought that he would have wanted information about the series to be shared, or expected that he would have referred me to a PR person within his company, or at Woolworths, SABC3, and/or Nedbank, the major sponsors of the series.  The best he could send me was this bland (pardon the pun) media release: END_OF_DOCUMENT_TOKEN_TO_BE_REPLACED