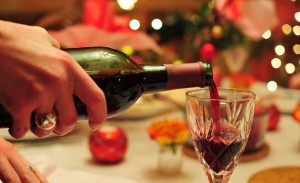 The Diners Club Winelist Awards acknowledge restaurants which take pride and interest in their winelists, and how the wines match the food END_OF_DOCUMENT_TOKEN_TO_BE_REPLACED 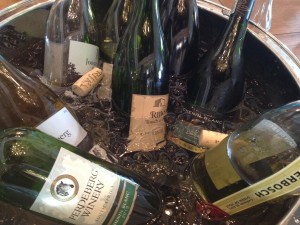 While the weather was not very co-operative in offering Cape Town a sunny summer’s day yesterday, it was a fun and friendly tasting of 21 wines for the Chenin Blanc Association Summer Showcase of fresh and fruity Chenin Blancs at the Cape Grace hotel.

Twice a year the roughly 50 Chenin Blanc producers meet to showcase their two styles of wine, rich and ripe in winter, and fresh and fruity in summer.  The functions are kept small, with an almost equal number of winemakers and writers invited, allowing a quality interaction between the media and wine representatives.  The producers have a passion for Chenin Blanc, which is the largest wine varietal produced in our country at about 18%, yet is not yet well known locally and even less so internationally. Through the work of the Association, the standing of Chenin Blanc is improving, and its benefits of offering value and being an excellent food wine are increasingly becoming known.

In the absence of Chenin Blanc Association Chairman Ken Forrester, described as ‘resident winemaker in the USA’, and Vice Chairman Jeff Grier, who had just arrived for his harvest in France, the most charming Bosman Family Vineyards winemaker Corlea Fourie led the tasting of the wines. 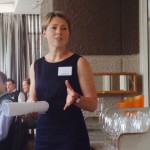 She represented Chenin Blanc to me – blonde, soft, sweet, understated, and gentle, yet tough when she needs to be!  She fed back that 30 Chenins had been made available for tasting at ‘The Beautiful South‘ wine tasting of South African, Chilean, and Argentinian wines in London last month.  Each producer had submitted their Chenin Blanc(s) to be evaluated by END_OF_DOCUMENT_TOKEN_TO_BE_REPLACED

*  A production first for New Media Publishing, synonymous with contract publishing, is an amazing video shot on the Franschhoek Pass for its client Mercedes Benz, called Silver Slipstream, in which Man (notorious skateboarder Decio Lourenco, who made headlines when he skated down Kloofnek Road) challenges Machine (Mercedes A 45 AMG) down the Pass, Man winning!

*   It was a wine weekend of note, with the fantastic 47% increase in sales income at R8,4 million at the Cape Winemakers Guild Auction at Spier, and the Veritas Awards ceremony held at the Cape Town International Convention Centre.  The top Veritas performers, out of 1792 wines and brandies entered, are:

+  KWV, with 4 double gold and 13 gold medals, and named END_OF_DOCUMENT_TOKEN_TO_BE_REPLACED

On Friday I was fortunate to experience a tasting of some of the wines in the Overhex Wines International range, and specifically their new additions to the two year old Balance range, which was held at one of the most popular restaurants in Cape Town, namely Luke Dale-Roberts’  The Test Kitchen.

The Test Kitchen in the Old Biscuit Mill premises in Woodstock is a small space, and we must have been about thirty journalists and bloggers who were lucky enough to be invited by charming PR consultant Nicolette Waterford.  The stature of the event was reflected by the attendance of Sunday Times wine writer Neil Pendock, Cape Wine Master Christine Rudman, Cape Times wine writer Cathy Marston, Christian Eedes, Wade Bales, Spit or Swallow’s Anel Grobler, Joanne Gibson, Greg Landman, and more, and the restaurant venue must have been an important attendance drawcard.   Spread over the two tables were staff of Overhex, including the co-owner Gerhard van der Wath, who manages the company, in close co-operation with JC (for Jean Claude) Martin, who is the Production Director, and is responsible for the wine styles and blends, assisted by Jandre Human, the cellar master.  Being private-owned means that Gerhard and JC can make quick decisions.   They are not restricted to only the grapes of their region, but can buy in the best grapes to suit their requirements, including from the Swartland, West Coast, Franschhoek, and Stellenbosch, allowing them to make wines at different price points.  The Overhex farm in the Breede River Valley outside Worcester produces about 10 000 tons of grapes, and about 5 million litres are bought in, JC told us.

JC (on the right, chatting to Greg Landman) has a Swiss German lilt when he speaks, and arrived in South Africa six years ago, having met his wife Carolyn (daughter of Walter Finlayson) on the wine estate in Switzerland on which he worked at the time, where she came to present label designs on behalf of the London design agency she worked for.  His association with Overhex started in 2005.  Alongside the Overhex wine involvement, JC makes his own Creation wines in the Hemel en Aarde valley outside Hermanus.   While this was not a Creation function at all, we did discuss the wines and the marketing of them, which JC does on the side when he represents Overhex wines overseas.  His wife does the marketing of Creation wines locally, and they had an average of 300 visitors per day in their tasting room over the festive season, he said.  They are very excited about the fact that the Western Cape province has placed the Caledon – Hermanus gravel road going through their valley as number one priority on the list of roads to be tarred in the province, and they see this as being of huge future benefit to themselves and their colleagues on the recently created Hemel en Aarde Valley wine route.   I sat opposite JC, and asked him questions abouit Creation – he did not talk about Creation when he addressed the guests.  JC told me he studied winemaking in the French part of Switzerland. Switzerland is not generally known as a wine producer, but JC told me that the Swiss drink all the wine produced in the total area of 25000 ha, and therefore it is not exported.  Whalepod is a new Creation brand, and we have started stocking it in our Whale Cottages.  JC told me that they are launching a new Syrah/Malbec Whalepod blend. Tasting rooms on wine farms are unique to South Africa, in that one can visit most wine farms without making an appointment, making this wine tourism valuable to wine farms selling their wines from the cellar door – for Creation it represents 30 % of their sales.

In 2003 Overhex was started as a co-operative, and was bought by Gerhard and a partner in 2005.  Initially their focus was on the international market, and they now export to 25 countries.  JC told us that they export to supermarket and liquor groups such as Marks & Spencer, CO-OP UK, and Fosters, making own label wines for them.   Most of the wine is made to the specific requirements of each of these chains, and exported in bulk, and bottled in the UK and in Germany.     Ten Overhex brands are exported, being 3,5 million bottles in total.

The reason for the launch function was to introduce the new additions to the Balance range, being the Winemaker’s Selection Shiraz 2010 and Winemaker’s Selection Sauvignon Blanc 2010.  They complement the existing Balance range of Cabernet Sauvignon 2009 (won a gold medal at Michelangelo 2010),  Shiraz Merlot 2010, Pinotage Shiraz 2009, Sauvignon Blanc Semillon 2010, Chenin Blanc Colombar, Reserve Unwooded Chardonnay, Sparkling Vin Sec, Sparkling Vin Doux, Shiraz Rosé and a sweet Rosé, aiming them at the domestic market for the first time.  Balance has been shaped for local wine drinkers, and the range is designed to be easy drinking wines with a shorter life span.   We were asked to evaluate the wines relative to their price point, the Winemaker’s Selection Sauvignon Blanc costing R40 and the Winemaker’s Selection Shiraz costing R45, representing incredible value, as none of the white and red Balance wines are more expensive than these two prices.  JC said that the Balance wines should not be judged on price alone, in that a cheaper wine does not mean that it is a bad wine.   Overhex operates ethically and cares about its supplier farmers, in that they offer them a price for their grapes that allows the farmers to survive.  The Balance wines are available at ULTRA intitally, and they are working on expanding the distribution at local outlets.   I asked about the elephant on the label, and the designer was at the function, but she could not explain it, other than that it was on the first Balance labels.  The Balance pay-off line is “for life’s lighter moments”.  The Overhex cellar now has a tasting room and Bistro, and locals are invited to visit the wine estate.  “Our goal with Balance is to get the wine lover to celebrate everyday wine culture, making it easy to enjoy delicious wines from a varied range at an affordable price point”, said Gerhard.

The Test Kitchen food was outstanding, and deep fried sushi was served before we started.  I chose a Trout tartar starter, which was light and perfect for the hot summer’s day.  As I had the kingklip when I had dinner at the restaurant in December, I ordered the beef fillet, and it is the softest I remember ever having, simply presented with green beans.   For dessert the choice was a cheese platter and lemon tart.

The launch and tasting of the Overhex Wines International Balance range of wines, ‘paired’ with the wonderful food by Chef Luke-Dale Roberts of The Test Kitchen, and the gift pack of Balance wines, was the start to an exceptional day, which ended with the attendance at the U2 360° concert at the Cape Town Stadium for many attending the function.