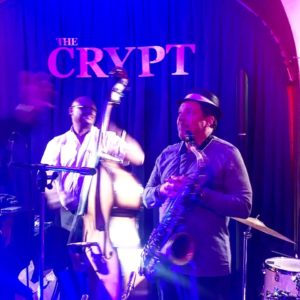 Last night I attended the reopening event of The Crypt Jazz Club, located below St George’s Cathedral on Wale Street in Cape Town. It is the only live jazz venue in the city centre, and is a manifestation of Cape Town’s reputation as a Jazz City, through its home-grown jazz talent and its annual Cape Town Jazz Festival. END_OF_DOCUMENT_TOKEN_TO_BE_REPLACED 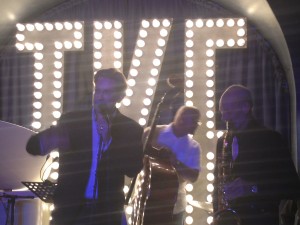 A chance notice about Ike Moriz performing at the recently opened The Crypt Jazz Restaurant below St George’s Cathedral last night caught my eye, and turned out to be a most enjoyable evening, with excellent music and ambiance, live jazz being on offer five evenings a week.  The service was sadly lacking.

The termination of the lease of the coffee shop which previously operated in the space led the Dean of St George’s Cathedral to contact Mario Thompson, the first owner of Gourmet Burger, which he had sold on to the owners of the ex-Caveau around the corner.  Simultaneously the Dean had been approached by Derk Blaisse, a jazz lover from Franschhoek, and leader of the Cape END_OF_DOCUMENT_TOKEN_TO_BE_REPLACED 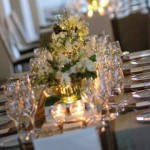 This week marks the official launch of two competing but neighbouring restaurants in the new Cape Quarter extension on Somerset Road in De Waterkant.   Cru Cafe’ (see review here) has been open since the beginning of the month, but celebrated its launch on Tuesday.  Vanilla has also opened, and its launch evening is on Friday.   In general, these are the two ‘serious’ restaurants in this new lifestyle centre, that is set to take off as Capetonians discover its unique combination of high quality shops.   Lazari is a restaurant that disappointed on a first visit, with a shrieking pink interior, and the restaurant staff and the patrons being unsure as to which of their two terraces are for smokers and non-smokers!   The visible food preparation area when one enters the restaurant is enough to put one off from entering and sitting down!

This week saw the opening of the long-awaited Crepe et Cidre in Franschhoek, near Huguenot Fine Chocolates.  It belongs to Robert Maingard, the largest hospitality owner in the village, also owning Le Franschhoek, and Dieu Donne, and he is also set to open a sports bar in the old station building soon.  He is opening two further restaurants in Franschhoek, on opposite sides of the main road, when he completes the malls next year, one being on the current Pick ‘n Pay site and the other on the site where the Huguenot Hotel was located.   Crepe et Cidre will be run by Gerhard van Staden, previously chef of the Le Franschhoek.  The creperie has “imported” Yann Guyonvarch from Brittany in France to train the staff in crepe-making.  His true French accent is a delight, but his stay will be a short 2 weeks.  Imported French cider is served.

At La Brasserie in Franschhoek, the Friday jazz evenings will start again tomorrow (30 October), and the opening session will be dedicated to the launch of a CD ‘Tribute to Alex van Heerden’, who played with the Cape Dutch Connection, and passed away tragically.

In Hermanus the new Hermanos restaurant has opened in the building in which Joubert restaurant operated before closing down earlier this year, with a new chef and owner Wayne Spencer.  He was originally the Executive Chef at Birkenhead House in Hermanus, and at Phinda Game Reserve, and worked at the Michelin-starred Port Palace in Monaco.   He says of his new restaurant that it is fine-dining but that it is not intimidating, and he will not place a lot of emphasis on plating the food.  He intends to come out of the kitchen, to chat to his guests, which is commendable – too few chefs do so.   The menu is small, with 5 starters (R36 – 48), 7 mains (R68 – R 110), and 4 desserts (ranging betwen R 30 – R 40), and sounds interesting. The winelist is more extensive, and is very proudly-Hermanus.  The restaurant is open Mondays to Saturdays for dinner only initially, and can be booked at tel 028 313-1916.

The Seafood at The Marine restaurant in Hermanus was a pleasant surprise earlier this week, when the most delicious kingklip was served.  The restaurant offers a choice of two courses at R 180 and 3 courses cost R 215.   A number of irritations on arrival – struggling to find the booking on the reservation list and a wobbly table – were sorted out when addressed, and the Relais & Chateaux crested butter arrived rock hard, so much so that it was unspreadable.  The restaurant has no ambiance, it being too brightly lit and it not having any attempt at a decor focus.  But the food cooks, and the hand of Executive Chef Peter Tempelhoff, a previous Eat Out Top Ten chef whilst at Grande Provence, is evident.  The biggest surprise was the presentation of three scoops of ice cream on a block of ice, serving a functional as well as an aesthetic role.   The whale-shaped biscuit served with the coffee, whilst not new, remains a cute and clever touch.   The service is friendly and willing, and a miscommunication between the waiter and the kitchen was quickly rectified.   No senior management was visible all evening.   The cloakrooms are most disappointing for a five-star hotel, and the owner Liz McGrath would do well to invest some monies in upgrading these at The Marine.

The speculation in a previous WhaleTales blog post that Ginja is to move to New Church Street (between Buitengracht and Kloofnek Roads), into the previous Relish and Nova restaurant space, has been confirmed by the EatOut website.  “Executive Chef Chris Erasmus will continue the Ginja legacy with his playful take on gastronomy, abundant with colour, texture and taste – using the finest local produce”, the website says.

Allee Bleue in Franschhoek is hosting its first Sushi and wine-pairing evening on Friday 6 November, at R 195, with a miso soup and tempura prawn starter, and five main sushi courses, each paired with a different Allee Bleue wine.   The dessert is a green tea brulee.  Chef Dane Newton, previously at Chamonix, is known in Franschhoek for his sushi.    In addition to Allee Bleue’s Bistro, the new Winetasting Courtyard 5-item menu, and the scrumptious picnic baskets, a small beer garden menu is also available to be enjoyed with the Paulaner draught beer served at the lower end of the estate.

Jordan wine estate is opening its The Restaurant at Jordan on 21 November.   The e-mail sent to announce the opening looks amateurish, and is an instant turn-off, as one is asked to commit to the food one would like to eat on that day, and the exact time slot in which one would like to eat it in.  Payment must also be done by bank transfer prior to arrival.  For a weekend treat, a visit to a wine estate is enjoyed in leisurely fashion, without being so prescriptive!  George Jardine of Jardine is the new chef of the country restaurant.

Cafe’ Sofia is boldly advertising its seven branches (Green Point, Camps Bay, Sea Point, Rondebosch, Gardens, Greenside and Blouberg) in a striking half-page advertisement: “Come and experience our new 2010 menu, the best breakfast in town or Happy Hour Cocktails.  You may be in for a surprise”.  The Happy Hour cocktails are priced at R 25 for cocktails and R 15 for beer on tap between 17h00 – 19h00, while breakfasts range from R 19 – R 29.

It was a food book launch week last week, with“Franschhoek Food”, written by Myrna Robbins, featuring the main chefs of Franschhoek’s restaurants, and some of their favourite restaurant menu recipes, as well as wine pairing suggestions.   “South Africa On a Plate” was also launched, a book featuring restaurants that deduct R 5 off the patron’s bill to go toward the Streetsmart charity.   A three-course dinner suggestion, with the recipes, is featured for each restaurant.   Grande Provence, Cafe’ 1999, Jewel of India, Auberge Michel, Ginga, Haiku, Rust en Vrede, Jardine, La Colombe, Ninth Avenue Bistro, Myoga, Mosaic, Bosman’s, Hartford House, Roots, The Saxon, Ile Maurice, and Terroir are some of the restaurants included in the book.   The inspiration for the book comes from Jess Meredith-Watts and his fiance’ Louise, who were touched by beggars on the streets, and felt that they could make a difference, by giving all the profits of the book sales to the Streetsmart charity.   More details about the book are available here.