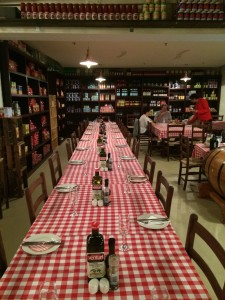 Piazza Italia appeared on our latest list of Restaurant Openings, and it was a Facebook message from Davide Ostuni, Puglia Cheese mozzarella producer by day and Chef at Piazza Italia by night, that encouraged me to try it out last night.  The restaurant has two Italians in the kitchen, a genuine Italian menu (without pizza), and Italian patrons eating there, a vote of confidence in a restaurant which has only been open for a month.

The restaurant belongs to Theresa Pearman, who comes from the jewellery industry, and fashion designer Pietro Giannuzzi, who had a dream to open a restaurant in which they could welcome and entertain their friends, bringing their dining room to the restaurant.  Neither of them have prior restaurant experience, giving them a refreshing approach to owning the business, and not having any preconceived ideas about restauranting.  Pietro only recently met Davide, and Theresa described the two men as being ‘soul brothers’, having a ‘bromance‘ about  Italian food.  I have only met Davide briefly at Burrata some time ago, and have been to see the Puglia Cheese factory, shown around by Davide’s wife Ursula. I had forgotten that Davide and Ursula owned five Italian restaurants in London, before moving to Cape Town, END_OF_DOCUMENT_TOKEN_TO_BE_REPLACED

I have been interested in the debate about which mozzarella is better – that which is made from buffalo milk, as is made by Wayne Rademeyer at Buffalo Ridge in Wellington, or that which is made from cow’s milk by Puglia Cheese in Cape Town.  My search for Stracciatella mozzarella, the most delicious spreadable mozzarella I first tasted at the Eat In Night Market a few months ago, led me on Friday to buy it directly at Puglia Cheese in Montague Gardens, and to meet the charming co-owner Ursula Ostuni.

Puglia Cheese was started as a joint venture by Davide Ostuni and Fabio Fatelli, both originally from the Puglia region in Italy, a year ago.  In a short time they have made their mark, in having won first place in the SA Dairy Championships Mozzarella category for their Burrata, and a second place for their Bocconcini, as well as a quality award for their whole Mozzarella range. One of Puglia Cheese’s biggest champions is restaurateur Giorgio Nava, who uses their mozzarella at 95 Keerom Street, Mozzarella Bar, and at Caffé Milano.  Initially he went to all his Italian restaurant colleagues in Cape Town, showing them the Puglia Cheese products, and now the company has clients such as Aubergine, Spar, Primi Piatti, Meloncino, Il Cappero, the One&Only Cape Town, the Mount Nelson Hotel, Giovanni’s, Nonna Lina, The Power & Glory, Wild Peacock Food Emporium, and all Melissa’s deli branches, just to mention some of the local outlets.  They distribute to the Garden Route as well.  Distribution via key Spar, Checkers, and Pick ‘n Pay branches is on the cards, which means that the company will move to bigger premises soon.

The star Mozzarella maker is Cosimo, who comes from Bari in Puglia, and does not speak English.  Ursula said he is the ‘key man’ at Puglia Cheese, being dedicated in almost single-handedly, and by hand, producing 300kg of cheese per day with only an assistant.  Hygiene is important, and I had to don a hair net, special shoe covers and a white jacket to go into the production room.  Production starts at 7h00, and finishes by lunchtime, and in the afternoon the products are packed and labelled, ready for delivery of the precious perishable products.  A machine is used to boil the cows’ milk, which comes from a Cape Town and a Stellenbosch farm, to which rennet, a curdling agent, is added, creating the foundation of all Mozzarella cheese.   Then Cosimo puts the curdled milk into 90°C boiling water, and with a wooden batten he shapes the cheese into ‘dough’, making it more and more pliable, out of which he makes ‘knots’, or the unique Nodino mozzarella not made by anyone else in South Africa, and is a typical Puglian mozzarella.  The same mozzarella dough is used to create a pocket into which straciatella mozzarella is added and then closed, to make Burrata.  A machine is used to make Fior de Latte and Bocconcini, but still needs Cosimo’s interaction with it in the production process.  Ursula told me that it took fourteen years for Cosima to learn the art of mozzarella making.

Davide grew up in Italy, and came to Cape Town on holiday, meeting Ursula at a party. She joined Davide in Italy, and said that it took some time for his mama to accept that Ursula would not be going away.  They went to London, where a friend of Davide’s worked, and he started as a waiter, worked at the Ritz Hotel, was a model, and started to learn to cook, but did not become a chef.  Ursula and Davide were in the United Kingdom for about thirteen years, and had five Italian restaurants in this period.  The last one they owned was located in St Albans and was called Carpe Diem, using only genuine Italian products, mostly imported and some home-made.  Once their first child was born, Davide moved into food-broking.  Having children, Ursula wanted to return home to South Africa, and they chose to live in Cape Town.  Both missed genuine mozzarella, only finding tough ‘tennis ball’ type local mozzarella here.  This led Davide to start making mozzarella, and establishing Puglia Cheese with his friend.  A future collaboration with Giorgio Nava, in creating more Mozzarella Bars, is on the cards. Ursula praises Nava, for his ability to use mozzarella in traditional recipes, but to adapt them by serving them with flair and elegance.

Mozzarella is made with buffalo milk in southern Italy, around Naples, and in central Italy, but the east coast and the rest of Italy makes mozzarella with cow’s milk, given that the milk is freely available, and that the mozzarella produced from it has a longer shelf life, resulting in about 80 % of Italian mozzarella being made with cow’s milk. Mozzarella made from buffalo milk is rich and creamy when fresh, but goes hard and sour after two days.  Its ‘dough’ is not soft and pliable, and therefore one cannot make mozzarella knots and balls from it.  Local mozzarella currently sold in supermarkets is likely to contain preservatives, to have a longer shelf-life.

Most food lovers associate mozzarella with Caprese salad, and therefore sales are high in summer.  Puglia Cheese is happy that food bloggers and writers are providing creative recipes for the use of Mozzarella in winter dishes too.   Ricotta cheese is also made at Puglia Cheese, and they are experimenting with the addition of peppercorns, chilli peppers, and walnuts for new products in future.

Disclosure: I was given a ball each of Burrata and Bocconcini to try at home, when I bought the Stracciatella mozzarella.