A number of hands-on demonstrations by some of the top chefs in Franschhoek will take place over the weekend of 10 -12 June, the chefs sharing their knowledge and passion for their craft, in what Franschhoek Wine Valley is calling ‘Cook Franschhoek’.

The chefs that have been included in ‘Cook Franschhoek’ are Margot Janse of The Tasting Room at Le Quartier Français, Neil and Tina Jewell from Bread & Wine, Bjorn Dingemans from Franschhoek Kitchen at Holden Manz wine estate, Judy Sendzul from the Salmon Bar, Ryan Smith from Ryan’s Kitchen, Leigh Trout from Mange Tout at Mont Rochelle Hotel, Darren Roberts at Grande Provence, Chris Erasmus at Pierneef à La Motte, Pierre Hendriks of Le Bon Vivant, Matthew Gordon from Haute Cabriere, Adrian Buchanan from Freedom Hill, as well as representatives of L’ermitage, Huguenot Fine Chocolates, Le Franschhoek Hotel, and Franschhoek Country House and Villas.   Each course will accept 8 – 30 participants, depending on the size of the demonstration venue.   Each demonstration will be paired with a Franschhoek wine.  Most, but not all, of the demonstrations will be held at the Franschhoek Kitchen.  The cost per course and the venues will be announced tomorrow, and will be added to this blogpost.

Franschhoek is re-asserting its positioning as the Gourmet Capital of South Africa.  While it may no longer have the largest number of Eat Out  Top 10 restaurants, it has just launched the Franschhoek Wine Valley Food & Wine Route, and ‘Cook Franschhoek’ is another demonstration of Franschhoek’s culinary leadership.

‘Cook Franschhoek’, 10 – 12 June.  www.franschhoek.org.za. Tickets can be bought at www.webtickets.co.za

POSTSCRIPT 18/3: The Franschhoek Wine Valley has not dotted all its i’s nor crossed all its t’s, and therefore is not yet able to provide cost, chef and venue details, as was promised for yesterday.  Darren Roberts from Grande Provence denies being a participant of the ‘Cook Franschhoek’ programme, not the first time that they have been erroneously listed on a Franschhoek programme, Roberts says.

POSTSCRIPT 6/4: The program for Cook Franschhoek has been finalised.  Most of the demos will take place at Franschhoek Kitchen at Holden Manz, the exception being those at the Salmon Bar, Le Quartier Français, Allora, and Pierneef à La Motte.  At each demo a chef and a matching winemaker will participate.  Prices range from R 30 for a chocolate tour and tasting at Huguenot Fine Chocolates, to R 225 each for two demos by the Salmon Bar, hosted by Judy Sendzul of the Salmon Bar and Marc Kent of Boekenhoutskloof: a Farmed versus Wild-caught salmon cook-off on 11/6, and a Salmon and Trout Tasting on 12/6.   On average the prices for the other demos range between R100 – R150.   Grande Provence and Le Bon Vivant are no longer participating in the event.  The full Franschhoek chef and winemaker list is as follows:

*   Judy Sendzul of Salmon Bar, and Marc Kent of Boekenhoutskloof

*   Neil and Tina Jewell of Bread & Wine, and Clayton Reabow of Môreson

*   Louis Jansen of Monneaux, and and DP Burger of Glenwood 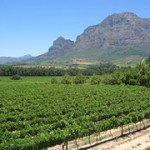 The Franschhoek Month asked the Vignerons of Franschhoek what effect the recession is having on their wine sales.

The majority of the estates that replied stated that their wine sales have increased relative to the same period a year ago.

Dieter Sellmeyer of Lynx Wines writes as follows: “Non-cellar door wine sales locally come mainly from restaurants and from mail campaigns and neither of these have suffered â€“ in fact restaurant business is up, which may partly have to do with the evolution of the brand. We have never done a lot through retail outlets as the competition there is massive and yes, cut-throat.”

Rickety Bridge exports to the UK and the USA; Vrede & Lust exports to Canada and Europe; Stony Brook focuses its exports on Europe; La Petite Ferme exports to the UK, Netherlands, Germany, Ireland and America; Graham Beck sells its products in 40 countries, but Sweden and the USA are its two most important foreign markets; and La Motte exports to Europe, Africa and the Far East.

The visitor profile of visitors to the wine estates appears to be varied. Graham Beck Wines estimates that more of their visitors are foreigners than South Africans, in line with 65 % of its wine production being exported. La Petite Ferme receives mainly European visitors, Vrede & Lust is visited by locals, British visitors and Americans; Rickety Bridge Winery says 40 % of its visitors are South African, and the balance are from the UK, USA and France; Lynx sells to visitors from the UK, Germany, USA, Sweden and Holland, as well as South Africans from Gauteng. Some wineries appeal more to older wine lovers, others to younger visitors. “Swallows” are an important part of the winetasting mix at La Motte, says Werner Briederhann, probably due to their exposure to the wines at the monthly La Motte concerts.

When asked how the Vignerons can assist in attracting tourists to Franschhoek, Haute Espoir’s Rob Armstrong said :’“Strive to enhance the experience visitors to our valley have in every aspect, to make this the most attractive destination in South Africa.” Jacky of Rickety Bridge Winery suggested that: “I think it is important to create as much a positive feeling about what you do, get the name out there, get people talking about what you have to offer, make sure your staff are positive and send that message through to customers. Don’t ride on your laurels and expect business to come to you, do as much as you can to drive business to you. Evaluate what you offer and see whether you are really offering guests the best you can, in terms of price, quality and service. If not, how can you expect people to come back. I think in these tough times consumers become sharper, will shop around for good value and will not support places that are taking advantage. I also think that business will have to work harder and smarter to achieve the same business they did in more liquid times.”

Buys says that â€˜great customer experience and value’ are key. “We compete with many other destinations in South Africa and elsewhere, and the overall value proposition must be very competitive.”

“We just try to do great value for money wines and give friendly, personal attention to visitors who come to the farm.  We believe in word of mouth advertising and our customers have been very loyal, even when times are tough” says Stony Brook Vineyards. For Els of La Petite Ferme it’s a change of focus to the South African market, while Graham Beck Wines’ Heyns says its “service, service, service!”

Sellmeyer is â€˜proudly-Franschhoek’, and makes an important point in this regard: “The best way is to send out the message of what a great place Franschhoek is, and all that it has to offer. To do this the most important thing is to remain upbeat, particularly in communications to the media and in newsletters. Visitors don’t like to go to a place that is depressed and down. But the Vignerons won’t be able to attract visitors on their own â€“ they’re only one element of the Franschhoek experience. It’s a joint effort between all players, and just like I only recommend restaurants in the Valley, I would expect the converse to be the case. When I hear about guesthouses only recommending wineries on the other side of the mountain I ask myself â€˜why?’- it’s like shooting yourself in the foot. It’s great if tourists go back and tell friends how much the Cape Winelands have to offer, but it would be better still if they told their friends how much Franschhoek has to offer.”

This article was written by Chris von Ulmenstein and was first published in the July 2009 issue of The Franschhoek Month.