Before arriving in Buenos Aires on this my second visit to the city, I had not prepared for my visit from a wine perspective, my main goal in spending a month in Argentina being to learn to dance the Tango. I have planned to visit Mendoza, renowned for its Malbec, have attended a wine tasting and food pairing evening at COWI in Buenos Aires, drunk three wines at the dinner at Buenos Aires’ Tegui, 86th Best Restaurant in the World, one wine at Don Julio, the 34th Best Restaurant in the World and Best in Argentina, and two wines at dinner at 1884 Restaurant in Mendoza. I have summarised my initial knowledge about the wine industry of Argentina, the fifth largest in the world, to which I have added some research information too. END_OF_DOCUMENT_TOKEN_TO_BE_REPLACED 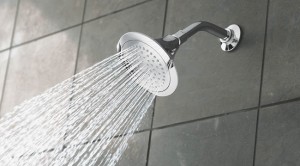 From tomorrow water restrictions will apply in Cape Town and Somerset West, to address the lower dam levels due to reduced winter rainfall in the Cape. This reflects climate change as well as the el Nino effect, which is particularly making itself felt currently in affecting the world’s weather. 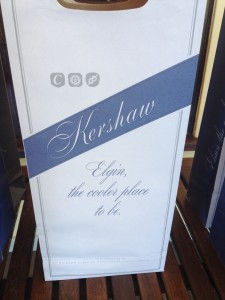 I heard Richard Kershaw’s name for the first time when he was one of 80 Platter 5 star winners for his inaugural Kershaw Elgin Chardonnay 2012 earlier this month.   Yesterday we attended a tasting of his 2012 Chardonnay and Syrah at Rodwell House in St James, at which Richard unpacked the importance of clones in making his two wines.

Richard is a larger-than-life personality, and wine judge and writer Angela Lloyd complimented him for his wines having personality too.  He grew up in Sheffield, and did a cooking course in Slough, at an excellent chef’s school.  He moved to winemaking, assisting in an American cellar, where he met a South African, who encouraged him to come to South Africa instead of to Chile and Argentina, where he intended to travel to next. He followed the advice of his friend, and fate determined that he met his now wife Mariette in the guest house in which he was staying in Stellenbosch, having arrived on the night on which Luciano Pavarotti gave his only South African concert, which they could hear from the guest house, he explained.   He was shown around different cellars, but was most impressed with Mulderbosch, 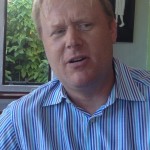 Laibach, and Vergelegen.  He followed his dream to go to Chile to help make wine there, but his heart drew him back to Stellenbosch and to Mariette.  He announced himself at Mulderbosch, boldly asking for a job, and his wish was granted.   He does not have a formal winemaking qualification, but became a Master of Wine (MW) two years ago, after a six year study period, the first South African winemaker to have END_OF_DOCUMENT_TOKEN_TO_BE_REPLACED