*   Our economy is struggling, business confidence having fallen to its lowest level in 16 years. The South African Chamber of Commerce and Industry Business Confidence Index fell from 88 in July to 84 in August! This scenario may cost the country’s workers 60000 jobs.

*   Given that the 2022 Commonwealth Games will be held in Durban, END_OF_DOCUMENT_TOKEN_TO_BE_REPLACED

*   British travelers can experience a virtual taste of Cape Town and other South African highlights whilst in Manchester(NoHo) and in London (Corbet Place), with a special film about our city on the virtual reality headset Oculus Rift.  Abseiling down Table Mountain, shark-cage diving, paragliding, kite-surfing, feeding elephants, and visiting the Johannesburg Neighbourgoods Market are featured. Two viewers will win tickets to travel to South Africa, to experience our country’s beauty in reality.

*   For the first time Tourism Minister Derek Hanekom has admitted that the Immigration Regulations, which were END_OF_DOCUMENT_TOKEN_TO_BE_REPLACED

*   Uber has announced its contribution to the advancement of business opportunities for women, in collaboration with the United Nations, committing to creating 1 million jobs for women drivers around the world by 2020. (received via media release from Uber)

*   The Western Cape Government has announced an internet competition to the value of R12000, in two categories.  The Internet Innovation category seeks ideas from residents as to how the internet can improve the social and economic benefits in their neighbourhood, with a R10000 prize. The second is the ‘How the internet has improved my business‘ category, with a R2000 prize.  Western Cape Minister of Economic Opportunities Alan Winde said: END_OF_DOCUMENT_TOKEN_TO_BE_REPLACED

*   Kfm news reports that the fire caused by lightning in Cape Point Nature Reserve yesterday has flared up again, threatening that area.

*   Distell is launching Nederburg Heritage Heroes in the UK, including The Motocycle (sic) Marvel, The Brew Master, The Young Airhawk, The Anchorman, and The Beautiful Lady.  The wine range is being targeted at fine-dining restaurants. 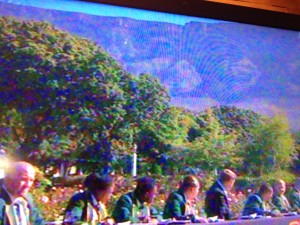 What a beautiful setting the Company’s Garden and backdrop Table Mountain was to last night’s episode 15 of MasterChef SA, fantastic marketing of Cape Town to the rest of the country’s TV viewers!   The Red and Blue Teams had to prepare a dish reflecting our country’s cultural food heritage, and the scoring was pretty close, or so the viewers thought!

Having won the Best Dairy Dish Challenge in episode 13, Kamini Pather was allowed to choose her team of five for the next challenge, as well as the apron colour,  when the box of aprons was delivered to the Finalists’ house. She chose the colour blue, and the two van der Wat sisters Seline and Leandri, Ozzy Osmond and Jason Steel for her team.  Amanda Beck and Karen Els appeared to be in charge of the Red Team, which consisted of Khumo Twala, Joani Mitchell, and Tiron Eloff too.   The team challenge was to make a dish that would reflect the origin of our country’s culinary heritage dating back to 1652, when Jan van Riebeeck planted the Company’s Garden to serve as a halfway house trading station of fresh foods for ships of the Dutch East India Company travelling between Holland and the Far East.  The South African Culinary Olympic Team, which participated in the Culinary Olympics 2012 in Germany, and returned with 12 medals for our country, was invited as judges.  We recognised Chef Tanja Kruger END_OF_DOCUMENT_TOKEN_TO_BE_REPLACED