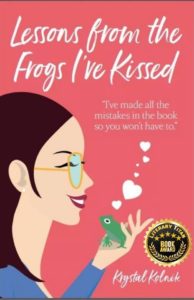 It was on Facebook that I saw an invitation from Krystal Kolnik that she was offering her book ‘Lessons from Frogs I’ve kissed’ for Review. Having written two books in the last two years and in the midst of my third ‘SwitchBitch’ book, plus the intriguing title, made me contact Krystal. I read the book on the rainy Election Day, and could not put it down until I had reached the last page, it was so gripping and real. END_OF_DOCUMENT_TOKEN_TO_BE_REPLACED 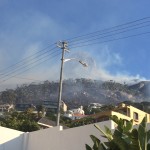 The Sweet Service Award goes to the 130 Cape Town Fire Department firefighters and the Volunteer Wildfire Services, which were instrumental in combating the fire on Lion’s Head and Signal Hill on Tuesday, and from spreading to the houses of De Wet Road in Bantry Bay, despite an unusually strong South-Easter.  Fighting subsequent fires this week, fanned by the South Easter, in Kommetjie and other areas of Cape Town, is also commended.  END_OF_DOCUMENT_TOKEN_TO_BE_REPLACED 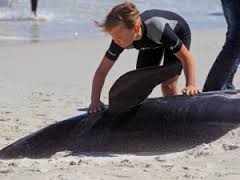 iol reports that five of the beached whales were transported to Simonstown, and were released back into the ocean, but one re-beached there again. Five whales died naturally, while another nine were ‘humanely euthanised’

Local residents, the NSRI, and police helped to keep the whales alive by pouring buckets of water over them and by placing towels on them.  Attracting attention across Cape Town after media broadcasts and Tweets announced the beaching, Noordhoek beach was eventually closed.

Whale researchers have not been able to explain why whales beach. It is speculated that the lead whale may become ill or caught in shallow water, and followed by the remainder of the pod.  Research also shows that marine pollution, shipping noise, as well as navy sonar noise may disorient whales and lead to the beaching. Pilot whales have a higher likelihood of beaching than other types of whales, particularly in New Zealand and Australia. Four years ago 55 killer whales beached at Kommetjie.

POSTSCRIPT 26/3: In the Cape Times Letters page today, Nan Rice, CEO of the Dolphin Action & Protection Group, corrects the incorrect media reports about the type of whales that beached, being false killer whales, and not pilot whales.  She writes critically about bystanders that criticise the euthanising of the stranded whales, and argues that it is more humane to euthanise them.  Not one of the nineteen whales survived, the whales put out into the ocean rebeaching again and also dying.

Last night the largest German TV station ZDF re-flighted ‘Ein Sommer in Kapstadt’ (A Summer in Cape Town), a beautiful movie reflecting the beauty of Cape Town, which was shot in 2009, and was first released in 2010.  It couldn’t have come at a better time, when Germans are planning their holidays for the coming European winter.

‘Ein Sommer in Kapstadt’ tells the story of a scorned wife, whose husband comes to Cape Town on a business trip.  She follows her husband to Cape Town when she finds him having an affair with a young Capetonian.  While the drama evolves, the characters drive across the city, and its magnificent beauty is captured through the filming: an opening shot from Bakoven in Camps Bay, onto the Twelve Apostles mountain range; Lion’s Head; some cute penguins running from the beach into the ocean; two lunches from a Blouberg restaurant right alongside the sea with the waves crashing while they eat; lots of driving in an exotic blue sports car along what could be Scarborough and Kommetjie; in Bo-Kaap on Rose Street opposite Haas; the promenade in Bantry Bay; lovely shots over the city

from Signal Hill; lunch at the V&A Waterfront with Den Anker and the Clocktower in the background; Greenmarket Square; a Cape Dutch wine estate; Long Street; the winelands; and going up Table Mountain with the cableway.   An AIDS angle is introduced too, penguins being used to teach children the symbol of loyal love by one of the characters in the movie.

The movie is dated only by the main character staying in the Hotel Le Vendome in Sea Point when she first arrives in Cape Town (the hotel closed down last year), and the storyline including the magazine Cape Style, which no longer exists.

One hopes that the movie will encourage German TV viewers to book their next holiday in Cape Town, given the beautiful impression which the city must have made on them.  One of the characters in the movie refers to ‘Kapstadt: Das Paradis der Erde’ (Cape Town, the paradise of the world), a wonderful accolade for the city. Given some more damaging German movies shot in Cape Town and shown on ZDF earlier this year, ‘Ein Sommer in Kapstadt’ is a welcome positive showcase of Cape Town.

The extreme heat in Cape Town and the Western Cape in the past week will have made one aware that climate change can affect our region too.  Record-high temperatures, touching 40C in Cape Town and 48C in Franschhoek, have affected every citizen.

The City of Cape Town’s head of environmental policy, Gregg Oelofse, has warned Capetonians that climate change will make itself felt locally, as the average temperature increase is estimated at 2-3C, “placing our coastal vulnerability as a very real concern that holds multiple implications for our city.  The risks associated with sea-level rise events can no longer be viewed as something to be addressed into the future, but must be considered as a priority in our immediate planning and management”, reports The Times.

The City’s report identifies Blouberg, Camps Bay, Kommetjie, Glencairn and the Strand to be “highly vulnerable” to a rise in sea level due to climate change.

Oelofse predicts that the Western Cape is destined to become drier, and that rain is less likely to be over a longer period of time and gentle, but shorter and more intense storms will bring the rain.   “The bigger the storm, the higher the wind velocity, and the higher the ocean swell that the wind pushes up against the coastline”.

The City is evaluating what it needs to do to protect the identified coastal areas against the rising sea levels.  It manages 307 km of coastline. 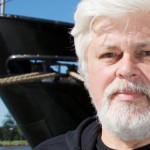 Captain Paul Watson, head of the Sea Shepherd Conservation Society, has incensed South Africans in calling for a ban on South African wine sales until Mike Meyer, of Marine and Coastal Management, labelled by Watson as the “Butcher of Kommetjie Beach”, be sacked.

Watson is so passionate about saving whales that he takes the Japanese head on every year in the Antarctic waters off Australia.

He was reacting to the slaughter of 44 pilot whales on 30 May at Long Beach in Kommetjie,  under the directive of Meyer.   Marine and Coastal Management, the Dolphin Action Protection Group, the NSRI and SPCA, along with hundreds of volunteers, tried to help the whales back into the stormy ocean, but only 14 made it back to sea, the others rebeaching.   These are the whales that Meyer had shot with a rifle, a traumatic event for the volunteers and members of the public present.

Criticism of the events of the day are that the public did not assist the whale rescue operation by wanting to have a look at what was going on, and by not accepting instructions; no clear directives were given to the volunteers and public, as no one seemed to be in charge of the rescue operation; and that the volunteers were not well trained enough.   Better volunteer training and a clear disaster plan should be prepared in the event of future whale beachings, say the parties involved in the whale rescue.

Watson’s call for the ban has been described as a “vicious and personal attack” on Meyer, according to the Department of Environmental Affairs, which is supporting Meyer’s decision.   The Cape Argus, reporting on the Sea Shepherd wine ban threat, wrote as follows: “Most of his statement about Meyer is too defamatory to print”.

Watson slates both Meyer and Marine Coastal Management, and its handling of the whale beaching on Long Beach.  “Meyer simply called himself a scientist and proclaimed the animals doomed, and thus gave the order for execution. This man does not possess a single scientific degree.   He is a bureaucrat, not a scientist, not a vet, and not even a former student of marine biology or any discipline involving marine species. In short he is an unqualified sadistic thug and an embarrassment to the government and the people of South Africa.” said Watson.

Watson has visited South Africa, and has been a speaker at a Whale Festival in Hermanus.    His full statement can be read on http://www.seashepherd.org/news-and-media/editorial-090602-1.html 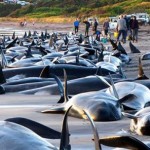 More than 50 pilot whales beached on Long Beach in Kommetjie, in Cape Town, on Saturday, reported The Associated Press, and the NSRI volunteers battled to steer the whales weighing over 1 000 kg each back into the rough seas.

The result was that 34 whales had to be shot in the head with a pistol, the most “humane” way for them to be “helped”, as they kept rebeaching themselves, it was said.

Nan Rice, of the Dolphin Action and Protection Group, said of the whale killing:  “I feel quite sad, but it is the right thing to do”.   She explained that mass strandings are stressful for whales.  Beaching takes place due to ‘navigational error’, she said, according to The Sunday Independent.

Other reasons for beaching may be that a whale may be sick or have parasites, which can affect its sense of direction, seeking out land.  This may cause other whales to follow suit, due to the social bonding between whales, reports the Sunday Argus.   Rip currents may also confuse the whales’ sonar.   The navy has denied doing any sonar testing which may have led to the beaching of the whales.

Twenty whales were saved, and successfully returned to sea.  Front-end loaders were used to move the whales back into the sea.