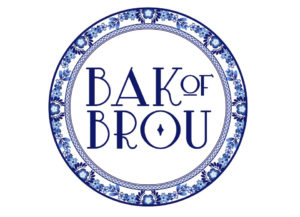 I hadn’t seen Anél Potgieter for a while, and met with her on Monday at SeaBreeze Fish & Shell, my new favorite restaurant in Bree Street, on an atypical winter’s day, at 28C.  She shared details of her fun new TV program ‘Bak of Brou’.  END_OF_DOCUMENT_TOKEN_TO_BE_REPLACED

*   SAA Acting CEO Nico Bezuidenhout has announced that one of its subsidiaries may be sold, and a stake in SAA could be sold too.  Subsidiary Mango may be listed.  Losses have been reduced from R7 million per day last year to R5 million per day two months ago.

*   Spur has been named as our country’s leading restaurant brand, out of 45 evaluated (the list is not supplied, but appears to consist of franchise brands), followed by McDonalds, Ocean Basket, Mugg & Bean, and Wimpy. The study was conducted in November last year, amongst customers earning R5000 per month or more. END_OF_DOCUMENT_TOKEN_TO_BE_REPLACED 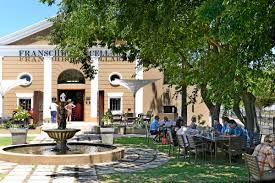 Yesterday I spent the afternoon in Franschhoek, and used the opportunity to visit the completely transformed Franschhoek Cellar, for which re-opening I had received an invitation, but could not attend the Monday evening function last month.  The redesign led to the closure in October and November last year, and the Franschhoek Cellar re-opening in December.  What has emerged is a monster, not suited to brand ‘Franschhoek’ at all!

For the first time I noticed yesterday that one can no longer park in front of the building, an area which was shared with that for The Stall.  There is no entrance into the wine tasting centre off the R45 entrance to Franschhoek anymore.  Instead the walkway to the centre has been turned into a garden, with a rose garden, another with protea varieties, and a fountain wall.  To the left of the building are some unusual looking ‘umbrellas‘, as if they are END_OF_DOCUMENT_TOKEN_TO_BE_REPLACED 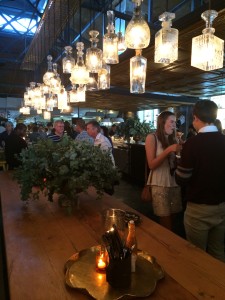 *   The Butcher Shop & Grill has opened next to Sotano in Mouille Point. END_OF_DOCUMENT_TOKEN_TO_BE_REPLACED 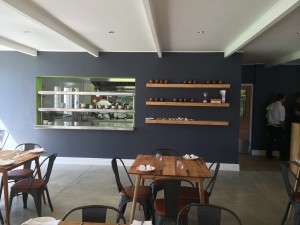 *   Michael Townsend (who own the La Parada, Lucky Fish, Harbour House emporium) has opened Tiger’s Milk in Muizenberg, the venue having previously been earmarked for a steakhouse.

END_OF_DOCUMENT_TOKEN_TO_BE_REPLACED 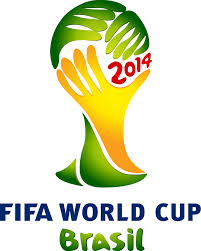 We are on the eve of the closure of what many describe as the greatest World Cup, and tonight the world will see Germany and Argentina fight for the title of World Cup Champion.

An interesting survey was conducted, to establish which were the best advertisements made for the 2014 World Cup, by interviewing top advertising industry executives in the USA.   These were the brands that were rated as having the best TV commercials, most of them closely linked to the world’s best soccer stars:

1.   Brazil: as a host country it was described as a ‘proud country being the perfect host’, in its welcoming nature to the soccer fans, and its team losing with such good spirit in the semi-final against Germany earlier this week

2.   Adidas trainers:  Using the pay-off line ‘all in or nothing’, the latest commercial is called ‘The Final‘, and it predominantly focuses on the Final tonight, with Lionel Messi and Thomas Müller.  It asks who wants the World Cup more, with ‘two teams, one trophy’.  The ‘Wake Up Call’ commercial was posted on YouTube on 12 June, at the start of the World Cup, and already has in excess of 7 million views!  It focuses on Argentinian Lionel Messi preparing on his own, with less airtime give to Bastian Schweinsteiger, representing the German team.  The commercial shows excerpts of a number of the earlier matches, and some of the soccer greats in action, including Mesut Özil scoring for Germany, Manuel Neuer defending so boldly for Germany, as well as Luis Suárez of Argentina, and Dani Alves of Brazil. END_OF_DOCUMENT_TOKEN_TO_BE_REPLACED 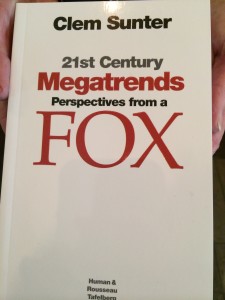 What an amazing experience it was to sit next to Clem Sunter at the 5th anniversary of the Thursday Club lunch at Buitenverwachting yesterday, the guest of the wine estate’s PR consultant Sandy Bailey.  At the lunch Sunter’s new book ‘21st Century Megatrends: perspectives from a Fox‘ was launched.  Sunter was the first speaker at the Thursday Club at its launch five years ago.

We were welcomed with a choice of a glass of Buitenverwachting Blanc de Noir or Meifort (a blend of Cabernet Franc, Petit Verdot, Merlot, and Cabernet Sauvignon).  Sunter was already in the restaurant, and was happy to pose for a photograph, volunteering to move away from the glass door so that the light did not affect the photograph, clearly an old hand at this.   We started chatting before the lunch started, and I received a quick overview of his talk, and learnt a lot more about him.

Christopher Sunter was born in the UK, the only son of a mother he was very close to, and went to school at Winchester College. At school Sunter played the guitar, and the first song he sang was ‘Oh my Darling Clementine‘, which led to his classmates calling him ‘Clem‘ after the song, and the name stuck.  He went to Oxford, and there he started a band with his friend, called the Clem & John Band.  His biggest claim to fame is the fact that the band co-headed a concert in Oxford at which the Rolling Stones performed as well, in June 1964, and he ended off his talk with this information.  We were lucky to have Clem sing for us at the table, his face lighting up as he did so. He shared that he performed with eleven other CEOs at a concert at The Barnyard in Johannesburg last year, organised by Reg Lascaris, the proceeds going 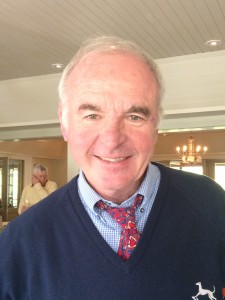 to charity.  He sang ‘Peggy Sue‘ and ‘Blue Suede Shoes‘ at the concert, and ‘Peggy Sue‘ for us at the table too.  Should his career as a scenario planner ever fail, which is highly unlikely, he can fall back into a career as singer!  Sunter also is very funny, saying that every year for three weeks he lived in the home in which his mother lived before she passed away. Every evening they were served a glass of wine, and he told a funny story about the residents of the home which brought the house down as he started his talk.   Sunter joined Anglo in London after university, and moved to Anglo Zambia in 1971, and then to Anglo South Africa two years later, serving as a Non-Executive Director of the company now, as well as consulting to corporates around the world as a scenario planner, and writing books.  Sunter has owned a holiday house in Simonstown for a number of years already, and he and his wife plan to move to Cape Town next year, a ‘semi-gration trend’, he said.  They live in Rosebank in Johannesburg and he said that he loves living in Africa, and feels completely at home in this country.  Two of his three children live outside South Africa, one of them in Perth, which caused a laugh as I had asked him whether we need to pack for Perth again, which he now refers to ‘parched Perth’ due to the impact of climate change on Australia. END_OF_DOCUMENT_TOKEN_TO_BE_REPLACED

*   American tour operators are seeing a shift of bookings to South Africa, due to the weak Rand, comparing the cost of a top end  ‘five star’ meal in our country to the price one would pay for a meal at McDonalds in the USA, and praising the price of the good value ‘world class wines’ locally compared to those from Napa.

*   Express in the UK praises Cape Town’s scenery, its beaches, as well as ‘sensational wines and innovative chefs’, with the headline ‘Dining on Cape END_OF_DOCUMENT_TOKEN_TO_BE_REPLACED 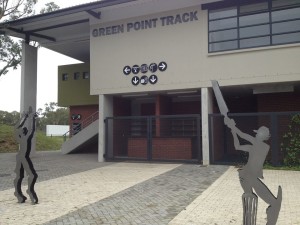 On Saturday Cape Town Mayor Patricia de Lille officially opened the Green Point Track, a new sporting facility which is hidden on the cul de sac road that leads away from the Cape Town Stadium, across the road from McDonalds.  Given that the launch has been very low key, with barely any information to be found via Google, we requested Artvark, the creators of ten urban art sculptures made for the Green Point Track, to let us have more information about the project.  It was interesting to read the motivation for the sculptures created, linking Cape Town’s sporting and recreation past and present.

On the cards since 2009, the urban art project was deemed to be an important part of the upgrading of the Track, to commemorate its history specifically, and the sporting and cultural history of Cape Town generally.  Landscape artist Darryl Pryce-Lewis conceptualised the idea of negative and positive panels made from metal, all to be positioned in a straight line, creating a ‘visual effect to be able to look through a negative space of an individual sculpture towards the positive, the symbolism of this already touch upon the diverseness and challenges faced in our country‘, explains Artvark. END_OF_DOCUMENT_TOKEN_TO_BE_REPLACED

*   M-Net’s channel location will change on 5 August, as Cape TV will be broadcasting from it. Multichoice is paying for installers to visit each affected Cape Town subscriber for the decoder to be adjusted, at its expense.

*   If membership of FEDHASA Cape is an indicator, then the hospitality business is going through tough times, their membership numbers declining due to businesses closing down or changing ownership, reports Travel News Weekly?

*   Are Celebrity wines worth their endorsement?  James Molesworth rates the wines of Ernie Els, Brangelina, Sting, and other celebs on THV. END_OF_DOCUMENT_TOKEN_TO_BE_REPLACED