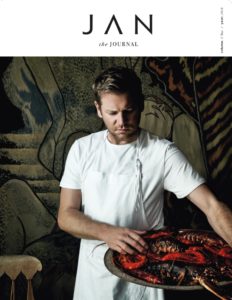 JAN the JOURNAL has published its second volume of 2018, just before the year closed. It has taken me almost two months to look at it after buying a copy at Woolworths, the 297 page manuscript of The Jan Hendrik Group (PTY) Limited being more than intimidating in thickness, and time required to do it justice in reading it. Despite having an editor for the publication, one wonders how Chef Jan-Hendrik manages to find the time to collate such a heavy-weight Journal in his role as Editor-in-Chief, given his commitment as chef to his one Michelin star restaurant JAN in Nice, and his regular trips to Cape Town and SA.  END_OF_DOCUMENT_TOKEN_TO_BE_REPLACED

The launch of the new cookbook ‘Cape Winelands Cuisine’ at La Motte wine estate yesterday was characterised by the professionalism and excellence that this Franschhoek wine estate has become known for, and demonstrated the leadership of La Motte in proudly promoting the cuisine heritage of the Cape Winelands.

From the time that the restaurant Pierneef à La Motte opened over a year ago, Cape Winelands cuisine has formed the foundation of its menu, its Culinary Manager Hetta van Deventer-Terblanche having researched a collection of recipes that originated from the Dutch, German, French, Flemish, and British settlers that came to the Cape more than 300 years ago, and a selection presented in the restaurant, with a modern twist.  The collection of recipes has been captured in the new book, which La Motte CEO Hein Koegelenberg describes as follows: “What really makes this book so special is that it is the first time in the history of South Africa that such a complete and detailed traditional recipe book with historical, scientifically based recipes is published”. The book ‘unlocks the history of food in South Africa and serves as a valuable guide to treasured food knowledge that was almost lost by our generation’, said the La Motte media release.

The 288-page book, with photography by Micky Hoyle, contains more than a hundred recipes.  A limited number of copies of the book was flown in from overseas for the launch function, so we were not able to page through the book.  The book should be widely available from November.  An unusual launch approach was used, by having a panel discussion with Hein and Hanlie Koegelenberg, Chef Chris Erasmus, and Hetta about the book, led by Rooi Rose food journalist and cookbook writer Mariette Crafford, asking interesting and challenging questions about the book, the history of Cape Winelands cuisine, and the cuisine policy of Pierneef à La Motte.  Chef Chris said his ‘roots are here‘ (in the Winelands), and highlighted that it is important to go back to celebrating South African food. There is a move away from deconstruction, to go back to serving food that reflects the season and the region.  People want food like they had at home, like mother used to make, which was like a ‘liefdesbrief’, often the favourite dish of each family member being made for Sunday lunches.  So the book contains something for everyone, it was said. Pairing the flavours in wines with those in foods makes the eating and drinking experience special, said Hein.  La Motte has started planting trees with traditional fruits, to harvest from in future, including guavas, figs and quinces, and they have started planting herbs and vegetables, for use in the restaurant kitchen. All chefs seek to be self-sustaining as far as supplies go, but there are some limitations, such as the local supply of venison and ‘heirloom vegetables’, Chef Chris mentioned.  Hein emphasised that La Motte is a family business, with family values.

The most impressive part of the launch function, over and above the lovely lunch at which we tasted some of the recipes contained in the book, was the recognition that all restaurants in the area should stand for and support Cape Winelands Cuisine, an unselfish promotion of the cuisine wealth of the region. A number of chefs were invited, including Margot Janse from The Tasting Room, Ryan Shell from Haute Cabriere, Topsi Venter, Neil Jewell from Bread & Wine, Christophe De Hosse from Joostenberg Deli, Neethling du Toit from La Petite Ferme, Marianna Esterhuizen from Marianna’s, Abie Conradie from Noop, Leana Schoeman from the Salmon Bar, and Simone Rossouw from Babel at Babylonstoren. Suppliers of Pierneef à La Motte were invited too, a nice touch, as were a number of bloggers and print media food journalists.  Restaurants and wineries from the area were encouraged to help market the book.

The lunch menu detailed the background to the items we were served, which has become characteristic of the menu at Pierneef à La Motte.  Each table was served a selection of starter dishes on a wooden board, to be shared, reflecting the ‘family’ feel one gets when one visits the restaurant.   The selection consisted of the signature Cape Bokkom salad (predicted by the restaurant to become a classic such as the Waldorf salad, Caeser salad, and Salad Niçoise), pickled fish with capers (its origin being Arabia), offal brawn (introduced by the French Huguenots), Rolpens (stuffed stomach, introduced by the Dutch), and pickled tongue, served with wholewheat farm bread from the La Motte Farm Kitchen.  This was paired with La Motte Pierneef Sauvignon Blanc 2011.  For the main course, the menu listed sweet and sour pumpkin and lamb stew, and pan-fried Franschhoek trout on a sweetcorn fritter with red wine sauce and turnip dauphinoise.  Interestingly, we were not asked our preference, and every alternate guest was served one of the two main courses.  Again, as a ‘family’ of guests Spit or Swallow’s Anel Grobler and I shared our main courses.  I had the trout,

and the menu stated that serving fish with a red wine sauce will have originated from the Dutch, but had been found in historic German and French cookbooks too.  It was paired with the La Motte Chardonnay 2009.  The stew recipe, paired with La Motte Pierneef Shiraz Viognier 2008, has its origin in Arabia, and was written about by a Cape traveller venturing into the African interior.

The dessert was a refreshing summer sweet soup with fresh berries, and a ball of fruit sorbet delicately balanced on two biscuit sticks over the bowl.  Sweet soups came from Holland, but probably have their origin in Italy.  A lovely pairing with this dish was the La Motte Méthode Cap Classique 2008.  More treats were served with the coffee,

a collection of biscuits, Cape fruit tartlets, macaroons (not a modern dish, but one that was originally called ‘makrolletjies’, made then with desiccated coconut, or almonds), apple marmalade, ‘kwartiertertjies’ (‘samoosa’ triangles, with an origin in Persia), ‘oblietjies’ (waffles) with cream, and cheese-tart with preserves.

The interesting and unusual launch of the book via the panel discussion in the historic wine cellar, the lovely lunch at Pierneef à La Motte paired with excellent La Motte wines, the friendly ‘family’ collection of guests, and the professional packaging of media information, with recipe postcards presented in a wax-sealed envelope with the La Motte emblem, is a recipe for success for the new cookery book, and for Pierneef à La Motte, which has been nominated as an Eat Out Top 20 restaurant, and is certain to make the Top 10 list on 20 November.