The Western Cape has 21 Blue Flag beaches out of 36 nationally, with eight of these in Cape Town alone and three each in Mossel Bay and Plettenberg Bay, excellent news for tourism to our city and province, as they are a confirmation of international standards of cleanliness, environmental management, and safety. ‘..the Blue Flag programme has impacts in terms of economic benefits, job creation and improved environmental management’, said Minister of Tourism Marthinus van Schalkwyk at the ceremony to award the latest Blue Flag beaches.

A list of 32 criteria is evaluated for a beach to be awarded Blue Flag status, focusing on water quality, environmental focus (education, information, and management), and safety and services (including parking availability, ablution facilities, and life-saving).  Minister van Schalkwyk added that “…tourism is one of the largest industries in the world and one that is heavily dependent on the natural resource base. Attractive coastal landscapes such sandy beaches, dune areas, estuaries, and coastal lakes are also preferred sites for tourism development. Hence, uncontrolled and ill-planned tourism significantly degrades the environment. Our environment is one of our greatest tourism resources. As the global sector grows, its impact on natural resources also grows, and therefore the need for sustainable planning and management become imperative for this industry.”

The Minister said that currently our country is promoted largely around its safari-type experiences and its beaches: “We have the capability and the means, the welcoming culture, and the varied, textured, beautiful destination that the world’s travellers – ever more demanding and discerning – want when they choose a destination.  As the number of Blue Flag beaches increases in South African, domestic visitors are increasingly exercising their choices in which beaches they visit and, as with international trends, our Blue Flag beaches are becoming the “beach of choice”.

The Blue Flag beach quality evaluation was introduced in Europe 25 years ago, awarding beaches that met the European Union Bathing Water Directive.  It is awarded in 40 countries, close to 4000 beaches being evaluated.  In South Africa beaches have been evaluated for Blue Flag status in the past twelve years.  In its year of inception there were only three Blue Flag beaches; now there are 36. Four marinas received Blue Flag status for the first time, including Yachtport in Saldanha, and the Granger Bay Water Club and False Bay Yacht Club in Cape Town.

Blue Flag beach status is not well communicated, and one would encourage the municipalities with such beaches to erect educational signage on the award-winning beaches, to enhance their tourism benefit.

Ten years ago only three South African beaches were awarded Blue Flag status.   South Africa is the only country outside of Europe to have its beaches tested for quality.   This ensures that locals as well as tourists can be guaranteed world-class beaches and facilities, being safe, clean and well-managed.   Climate change is affecting the quality of beaches and its facilities, and municipalities are commended for spending scarce financial resources to rehabilitate these beaches in order to meet and maintain the Blue Flag standards.

The 27 Blue Flag beaches are the following: 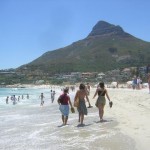 Municipalities have seen the benefits to tourism in their areas of being awarded blue-flag beach status,  ensuring that the beaches in their areas are clean, safe and well-managed.   South Africa is one of 38 countries participating in the Blue Flag programme.

The full list of South African Blue Flag beaches is as follows: