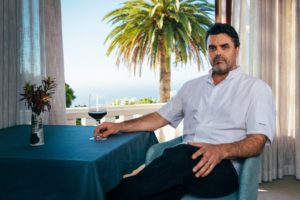 Just two months after the termination of the ten-year relationship between Chef Peter Tempelhoff and The Liz McGrath Collection, and with it Top Ten Greenhouse restaurant, it has been announced that he has been appointed as Culinary Director at the prestigious Ellerman House in Bantry Bay, Cape Town. END_OF_DOCUMENT_TOKEN_TO_BE_REPLACED

*   Speculation about the reason for the stepping down of Koos Bekker as CEO of Naspers at the end of last month is that Bekker may be planning to create the world’s largest global internet, media, and digital group.

*   Bloomberg Businessweek has highlighted Cape Town as the jet set holiday destination of celebrities such as Kim Kardashian and Oprah Winfrey, paying R50000 per day to stay in the new villa at Ellerman House, which houses owner Paul Harris’ art collection and new Wine Gallery (a serious one, not a six bottle one like that of the petite Pendock Wine Gallery)! Unfortunately the article contrasts the opulence of the villa and its guests with the poverty of the inhabitants of the townships in Cape Town, and highlights the city’s poor reputation as the ‘most violent city in Africa‘!

*   Top UK chef Michel Roux Jnr has resigned from the BBC produced ‘MasterChef: the Professionals’ and ‘Food and Drink‘, describing negotiations with the BBC as a ‘frustrating process’, the corporation not having an appreciation of Roux’s commercial relationships. 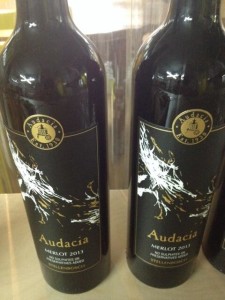 I was invited by Eclipse PR to attend a media briefing at the offices of Cape Town Design NPC, the company operating Cape Town’s role as World Design Capital 2014, on Thursday, the first such invitation, and received earlier in the day.  While it was thin on media news, and poorly attended, it was a most interesting session, in learning about the unique new sulphite and preservative free Audacia Wines using indigenous woods for its maturation, one of the about 450 registered World Design Capital 2014 projects.  Being an official project, it has raised the bar of Audacia’s design elements.

Co-owner Trevor Strydom is passionate about his pet project, and started talking to me about it in the reception whilst we were waiting for the meeting to start.  Audacia Wines is a partnership between Trevor and Paul Harris of Rand Merchant Bank and Ellerman House, describing itself as ‘The Red Wine Boutique Winery‘ 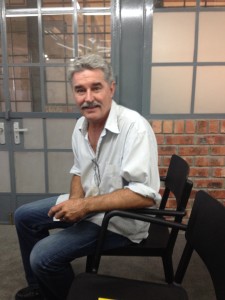 . Given how tough the wine industry is, and that there are no subsidies for farmers, it is hard to survive in the industry. Harris inspired Trevor with the quote: ‘change only occurs when the pain exceeds the joy‘, and advised him to find a point of difference for his brand, which currently is very well known for its weekend market off the R44.

Trevor read up about the law of winemaking and additives, and found that only two additives are allowed: enzymes, and wood.  He made his winemaker Michael van Niekerk make samples of red wines with different woods, given that every winemaker uses oak, whether as staves, chips, or powder, and they tried woods such as bluegum, acacia, and fig, to the amusement of van Niekerk. Being offered tea by his daughter one afternoon, she drinking a cup of rooibos tea with him, he had the brilliant idea to try rooibos wood (Aspalathus linearis), and they were delighted with the results, not being picked up on the nose nor on tasting the wine.  Whilst consulting his patent lawyer Mohammed Valli, he was initially sceptical whether a non-drinking lawyer could identify with his project.  He was most impressed with Valli’s conclusion that the anti-oxidant properties END_OF_DOCUMENT_TOKEN_TO_BE_REPLACED 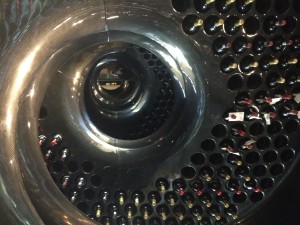 Ellerman House is one of Cape Town’s leading boutique hotels, and has one of the largest private art collections.  Now it has inaugurated a world class Wine Gallery in the basement of its newly opened Villa Two, with a record number of 7500 bottles of wine. Architect Michael Dennett of DV8 Architects created the unique space, which aims to reflect the more than 350 year history of winemaking in South Africa, and to create an environment of learning more about and tasting our wines.   It presents the Ellerman House wine collection as a work of art in itself.

Earlier this week I visited Ellerman House, and friendly guide Heike Gerntholz showed a group of us around the new Villa Two and its Wine Gallery. The 3 bedroom villa costs R50000 per night to rent, with its own butler and chef.  The Wine Gallery can be accessed by the guests in the villa, as well as by the guests in Villa One, and in the main building, via a separate entrance.  Villa Two guests are isolated from any noise made by the users of the Wine Gallery, we were told.

My focus was the Wine Gallery, and a hand-crafted stainless steel spiral staircase takes one down to it.   It is a vast temperature-controlled space, and a number of elements attract one’s attention.   The design of the very large  lights above the tasting table was inspired by wine glasses.  Behind the tasting table is a 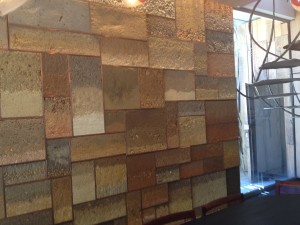 Terroir Wall designed by Angus Taylor,  in shades of brown, orange, yellow, and beige, representing the soils of 100 local wine farms, including La Motte and Chamonix, each framed and named.   There is a massive bar counter made from a solid block of granite, with a hematite wall behind it, and a END_OF_DOCUMENT_TOKEN_TO_BE_REPLACED

*   Ellerman House has opened a Wine Gallery, to the irritation of Neil Pendock, whose petite (2 x 4 m space, and 6 bottles only per month) Wine END_OF_DOCUMENT_TOKEN_TO_BE_REPLACED