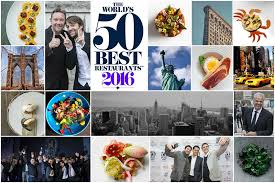 It has been an exciting early morning, with the World’s 50 Best Restaurants announced from Cipriani Wall Street in New York from 2h00 this morning. The Test Kitchen has done our country and Cape Town in particular proud, by becoming the 22nd Best Restaurant in the World! Osteria Francescana in Modena in Italy, owned by Chef Massimo Bottura, is the World’s Best Restaurant. END_OF_DOCUMENT_TOKEN_TO_BE_REPLACED 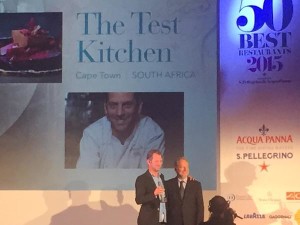 El Celler de Can Roca is based in Giron in Spain, and is run by the three Roca brothers Josep, Joan,and Jordi, who opened their restaurant in 1986. They pioneered sous-vide cooking, and are described as creating ‘magic without undue theatrics’. Brother Joan is the head chef, Jordi is the Pastry Chef, and Josep is the Sommelier and Front of House.   In 2013 they were also named the best restaurant in the world. END_OF_DOCUMENT_TOKEN_TO_BE_REPLACED

While South Africa did not make the The Restaurant S.Pellegrino & Aqua Panna The World’s 50 Best Restaurants 2013 list, Cape Town’s The Test Kitchen was singled out in a newly introduced award ‘One to Watch’, proudly received by Owner/Chef Luke Dale-Roberts, which also made 61st position.  Noma’s hold of the number one position on the world restaurant list in the past three years has been broken, with the three Roca brothers at El Celler de Can 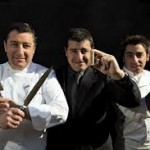 A Lifetime Achievement Award, sponsored by Diners Club, went to Chef Alain Ducasse, while the World’s Best Female Chef Award went to Nadia Santini of Dal Pescatore in Italy, which has had 3 Michelin stars since 1996!  The Chef’s Choice Award went to Grant Achatz, of Alinea in Chicago.  The Highest Climber Award went to Astrid y Gastón in Lima, Peru, climbing 21 places to number 14.  The Sustainable Restaurant Award went to Narisawa in Tokyo, also winning the accolade of best Asian restaurant.

El Celler de Can Roca is based in Giron in Spain, and is run by the three Roca brothers Josep, Joan,and Jordi, who opened their restaurant in 1986. They were in second place for the past two years. They pioneered sous-vide cooking, and are described as creating ‘magic without undue theatrics’. Brother Joan is the head chef, Jordi is the Pastry Chef, and Josep is the Sommelier and Front of House.  Noma slipped to second place, having set a new benchmark for Nordic cuisine, but was dealt a bad blow when numerous customers suffered a very bad virus after eating at the restaurant earlier this year. South African chefs Eric Bulpitt (now of The Roundhouse), Chris Erasmus at Pierneef à La Motte, and Shaun Schoeman at Fyndraai all have done a stage at this world-renowned restaurant. 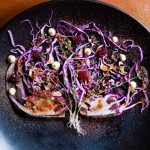 The Test Kitchen (left) improved its ranking from last year’s 74th position by 13 places this year, while The Tasting Room at Le Quartier Français improved by four positions to number 53.  Until two years ago the latter restaurant featured in the top 50 list.

The 900 international judges each submit their top seven ranked restaurants, of which three must be from outside their country, based on eating experiences in the past eighteen months.