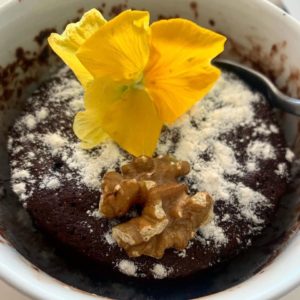 It is clear to see that the Vegan trend is growing by leaps and bounds.  In Camps Bay, for example, three restaurants out of twenty in the suburb are almost completely Vegan in the fare they offer, particularly okja and Plant Food, while Firefly Café has a large percentage of Vegan dishes. Even regular restaurants have a number of Vegan dishes on their menus.

In honour of Vegan Month I was challenged by B-Well, together with a number of other ‘Influencers’, to bake a Vegan Chocolate Mayonnaise Cake in a Mug, the mayonnaise ingredient intriguing me in particular, and therefore I agreed  to participate. END_OF_DOCUMENT_TOKEN_TO_BE_REPLACED 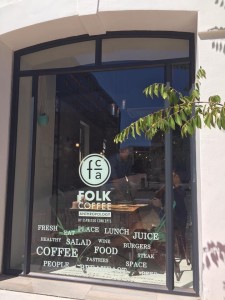 It was a quiet Human Rights Day when I drove along Bree Street from one end to the other, to update my Blogpost about Cape Town’s famous food street, and saw a board outside Folk Coffee Anthropology, signaling that it was open. END_OF_DOCUMENT_TOKEN_TO_BE_REPLACED

I was invited by Errieda du Toit PR to attend the Taste of Cape Town, and was joined by END_OF_DOCUMENT_TOKEN_TO_BE_REPLACED 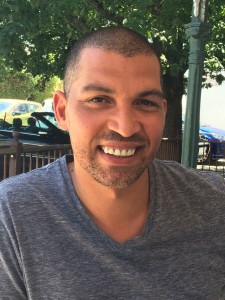 *   filmed MasterChef SA Celebrity Edition, a series we are yet to see, in January 2015, in which he cut his MasterChef judging teeth, apologising that he was still new at being a TV cooking show judge.  Food24 reports that the 10 celebrities, cooking for a prize to be donated to  charity, are Singer Patricia Lewis, Comedian Chris Forrest, Comedian TolAss­Mo, END_OF_DOCUMENT_TOKEN_TO_BE_REPLACED 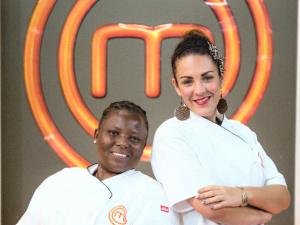 A week before the MasterChef SA Season 3 winner was announced you started warming up the topic, by quoting Sipho in saying END_OF_DOCUMENT_TOKEN_TO_BE_REPLACED 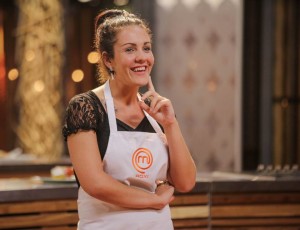 The Top 2 finalists met up in the MasterChef SA kitchen for one last time, and were delighted to see the other 10 Finalists there too, coming in support of the Top 2.  An even bigger surprise was the surprise arrival of Roxi’s parents and her boyfriend Byron, as well as Sipho’s ‘boss‘, as she called him, his wife, and their END_OF_DOCUMENT_TOKEN_TO_BE_REPLACED 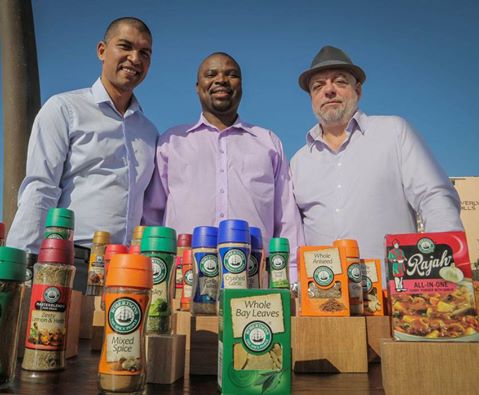 Can Robertsons be any more dominant in MasterChef SA than in last night’s episode 8?  We have renamed MasterChef SA MasterRobertsons, as the hard sell of the spice brand in this Season 3 is becoming laughable!  One wonders how judges Benny Masekwameng and Pete Goffe-Wood (note his grumpy look in the M-Net publicity shot) must feel to have to push the brand, not an issue which Reuben Robertsons Riffel loses any sleep about, having cashed in on the spice brand for the past three years, thereby losing any credibility he may have previously had as a chef!

The episode started with the Blue Team, which lost the Team Challenge in episode 7.  Filmed on an interesting looking bridge in Umhlanga, directly at the ocean, the five Finalists Penny Fitchet, Refilwe Tselanyane, Roxi Wardman, Francois Zietsman, and Sipho Mdlankomo watching as Chef Benny was wheeled onto the bridge in a rickshaw, clutching a cloche, which he ceremoniously opened to reveal a Bean Curry Bunny Chow.  On the table surrounding the typical Durban dish was a collection of about 20 Robertsons spices and herbs, each 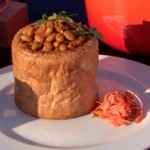 covering a board with a black or a white sticker.  The task of the five Finalists was to each identify one of 15 spices and herbs in the Bunny 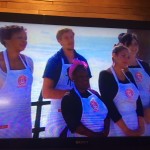 Chow, just from tasting it.  The Finalists each drew a wooden cooking spoon with a number on it, to determine the order in which they had to identify the ingredients.  The Robertsons collection stood on a table with the ultimate kitsch tablecloth, in a bright orange, looking like rosettes.  Riffel clearly did not take History at school, confusing the role of Durban and Cape Town in linking our country to the East!

We are extremely proud to have you living in your newly adopted home city Cape Town, and that you are such a fantastic tourism ambassador for our country in general, and for Cape Town in particular.  You put Cape Town on the world tourist map with your article earlier this year in the New York Times about Cape Town being the number one  ’52 places to go in 2014′, the best free publicity our city has ever had.

I was therefore shocked to see your article about ‘Top Chefs in Cape Town’ in Travel + Leisure, and the choices you made in selecting what you have listed as the top five chefs in Cape Town: Luke Dale-Roberts of The Test Kitchen, Peter Tempelhoff of The Greenhouse, Reuben Robertsons Riffel of Reuben’s x 4 (in Franschhoek, Cape Town, Robertson, and Paternoster) plus Racine, Bruce Robertson of The Flagship, and Franck Dangereux of The Food Barn, in that order. You did not define your guidelines for selecting the five chefs, nor did you appear to use the same criteria in selecting the chefs that are on your list – the justification for inclusion appears more anecdotal and random.  Equally, I am surprised about the chefs you excluded from the list!

You seem to praise Chef Franck for his ‘foreign pedigree, but why single him out when Chefs Luke and Peter also have foreign roots?  Does that make them better chefs?  All of the chefs on your list have worked overseas, so they deserve equal mention in this regard.  You ‘warn’ Travel + Leisure readers to ‘watch out for these five Cape Town chefs and memorize their names now – they’re poised to break through to the global stage any day now‘!

Let me comment on each of your Top Chef choices: END_OF_DOCUMENT_TOKEN_TO_BE_REPLACED 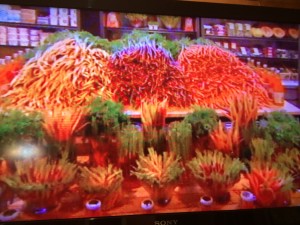 Episode 5 of MasterChef SA was long and drawn-out, featuring nine desserts made from a surprise ingredient – a Pantry overflowing with carrots, carrot juice, and carrot powder. Three new contestants will go into the Pressure Test in episode 6 next week, Ndumiso Mncwabe clearly heading for an early exit as he is facing his second Pressure Test.

The episode commenced with a recap of episode 4, Roxi Wardman sharing her euphoria about having visited and eaten at Chef Kevin Thornton’s 2 star Michelin Thornton’s restaurant in Dublin, for having won the best dish in episode 3.  She described it as a ‘mind blowing, life changing’ experience.  Philippa Robinson shared that Roxi’s success and her new confidence from her trip makes her feel intimidated, as she is one of the strongest contestants.

Reuben Robertsons Riffel led the contestants to the Pantry, and they were surprised to see the mountain of carrots, in red, orange, and purple, from which they had to make a dessert, with the carrot the focus, said Chef Benny Masekwameng.  Riffel said that a carrot dessert is not as crazy as it seems, and challenged the contestants to apply their mind.  A time limit of 90 minutes was set, 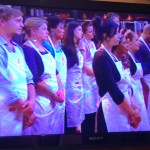 but the Pantry was closed 15 minutes after the start. Once again the contestants were told that the three weakest dishes will place their creators into the Pressure Test, one of them going home in episode 6.  While there are eleven contestants left, only nine of them were interviewed and the evaluation of their dishes shown, Francois Zietsman and Mel Sutherland receiving no airtime last night. END_OF_DOCUMENT_TOKEN_TO_BE_REPLACED

pasture-fed lamb from the Karoo.  Criticism has been leveled about the use of an Australian surfer who came third in MasterChef Australia in 2011, as the tour guide to our country and the guide to its sustainable food and wine treasure chest, a self-confessed ‘cooker’ and not a chef!  The dishes in the eight episodes to date have been as basic as salads, pizzas, and sandwiches, with a mussel pot and an Eton Mess too.  In some episodes the Woolworths punt has been so strong (i.e. the tomato growing) that it has become irritating, but of late the strong Woolworths promotion has been toned down. Surprising is the low-key advertising for Woolworths in its half-hour episodes, and is nothing as mouthwatering as the Woolworths’ commercials we have seen on MasterChef SA Seasons 1 and 2.  Nedbank is the other END_OF_DOCUMENT_TOKEN_TO_BE_REPLACED