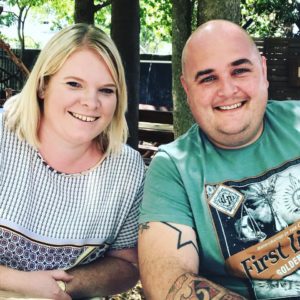 Yesterday I met with Chef Oliver Cattermole and his wife Becky for coffee in Franschhoek, to hear the latest details about their first self-owned restaurant Bovine, which opens today in two weeks on Franschhoek’s main road.  END_OF_DOCUMENT_TOKEN_TO_BE_REPLACED 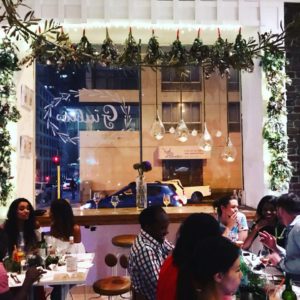 Last Thursday I was one of a number of writers who was invited to attend the Summer Dinner launch at Giulio’s Café, the restaurant opening for dinner trade for the first time, on Thursday and Sunday evenings.  END_OF_DOCUMENT_TOKEN_TO_BE_REPLACED 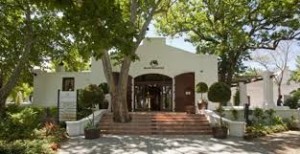 Blaauwklippen’s Barouche Restaurant has just launched its rich and warm Winter Menu, filled with a selection of old faithfuls as well as new interpretations of restaurant standards.

Yesterday I was part of a group of three writers invited to sample Chef Chris Maree’s menu, and to taste the latest Blaauwklippen wine releases (Chenin Blanc 2013, Merlot 2011, and Cabernet Sauvignon 2010) too. The idea was to sample each of the starter, main course, and dessert dishes, in small portion sizes.  Chef Chris prepared his dishes, 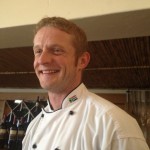 and then talked them through with us at the table, encouraging feedback. Chef Chris moved to Blaauwklippen from The Oyster Box about a year ago. He shared that he grows herbs on the farm, but sources vegetables from Three Peas, and he obtains his meat from Sacks Butchery and Deli-Co. The Barouche kitchen team is very 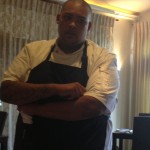 excited that its Sous Chef Germaine Esau achieved second place in the Chaine des Rôtisseurs Jeunes Chef Cape competition, scoring just one point less than winner Chad Blow from the Cellars Hohenhort, who was also declared the national winner, and will represent our country in the international Jeunes Chef competition in Turkey later this year.

We had an interesting discussion about wine competitions, and how inconsistent the results are.  This can be due to the handling of the wines on the day of tasting, different wines performing best at specific temperatures, said Rolf Zeitvogel, Blaauwklippen Winemaker and MD.  Another influence on the results is the panel composition, and the competence (or not) of the panel to judge rare cultivars in particular, tending to be conservative in their scoring if they do not know the wines well. Competition results can be inconsistent in different years, even in the same competitions. It was felt that Platter’s ratings are now more consumer driven, given that wine drinkers are less inclined to age wines, not making all winemakers happy. The Veritas Awards, CWG Auction, Old Mutual Trophy Wine Show, and The Michelangelo Wine Awards were judged to be the most credible.  Rolf is on the eve of a marketing and sales trip to Beijing, Hong Kong, and Macau.  We talked about the weak Rand, and the impact on their exports, which are bottled sales to our neighbours Namibia, Mocambique, Botswana, and Zimbabwe. China and Hong Kong are growth markets, while sales in delis in Poland are also doing well, Rolf shared.  The German market is flat.

Our starter platter consisted of tasters of four dishes on the new winter menu: Patagonian 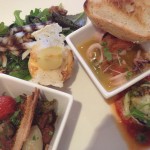 It was hard to choose one favourite out of the six main course tasting platter, the brisket evoking childhood memories, the kingklip liked for its unusual curry sauce, the Chateaubriand loved for its tender steak, and the bobotie for its unusual pastry crust. The Catch of the day, which was kingklip yesterday, was served with an olive and white chocolate crust, and the most delicious mild curry sauce, to which had been added roasted peanuts, macadamia nuts, and mange tout (R125).  The Braised beef brisket cooks the whole night through, at 50°C, and was served with butternut and coconut cream purée, potato fondants, sautéed green beans, 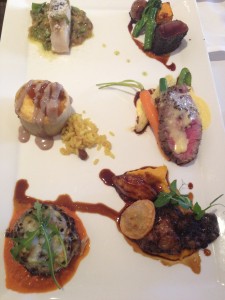 fried beef tartar ravioli, and a Zinfandel Noble Late infused jus (R125), paired with the Blaauwklippen Shiraz.   The Chateaubriand was delicious, served sliced for two persons at R500, with jardinière vegetables, and buttered chateau potatoes, paired with Blaauwklippen Cabriolet (a blend of Malbec, Petit Verdot, and Cabernet Sauvignon). The pepper-crusted seared springbok loin was presented with butternut and potato dauphinoise, tender stem broccoli, balsamic glazed baby onions, and a cranberry jus jelly (R135), paired with Blaauwklippen Zinfandel.  The leg of lamb bobotie was a talking point, with its unusual pastry casing in which the truffle and lemon thyme custard was baked, served with yellow rice, a raisin and date crumble, and a caramel banana mousse, topped with a Turkish apricot chutney (R120), paired with Blaauwklippen Malbec. The baked aubergine lasagne was made with layers of baby marrow, wild mushrooms, and caramelised red onion, which was wrapped in grilled aubergine slices, oven baked and gratinated with Pecorino, served with arrabiata sauce, basil pesto, and topped with fresh rocket tossed in sesame oil (R105), paired with Blaauwklippen Zinfandel.

The desserts were judged to be very sweet, and it was felt that a brandy pairing would counter this. The desserts had many hidden taste elements. The taster selection had a caramelised white chocolate cheese cake with a clementine 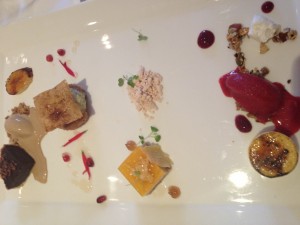 glaze, dehydrated lemon curd, salted caramel, and smoked whiskey (R55); the rich 6 minute chocolate tart was served with banana purée and an unusual Castle Milk Stout ice cream, which had a coffee taste (R40), the free form brûlée was served with a sherry, marshmallow and almond streusel, and berry sorbet (R55), and a 30 second sponge was served with pistachio ice cream, baklava syrup, and phyllo tuilles (R35).  We were offered a glass of grappa too, and my dry cappuccino was perfectly prepared.

We had a very personal interaction at the special Blaauwklippen lunch yesterday, and were honest in sharing our experience of the food and wines tasted with Chefs Chris and Germaine.  We felt that a lot of love and thought had gone into the development of this Winter Menu.  We enjoyed the platters of menu tastes, and suggested that they be offered as an option on the Winter Menu too.